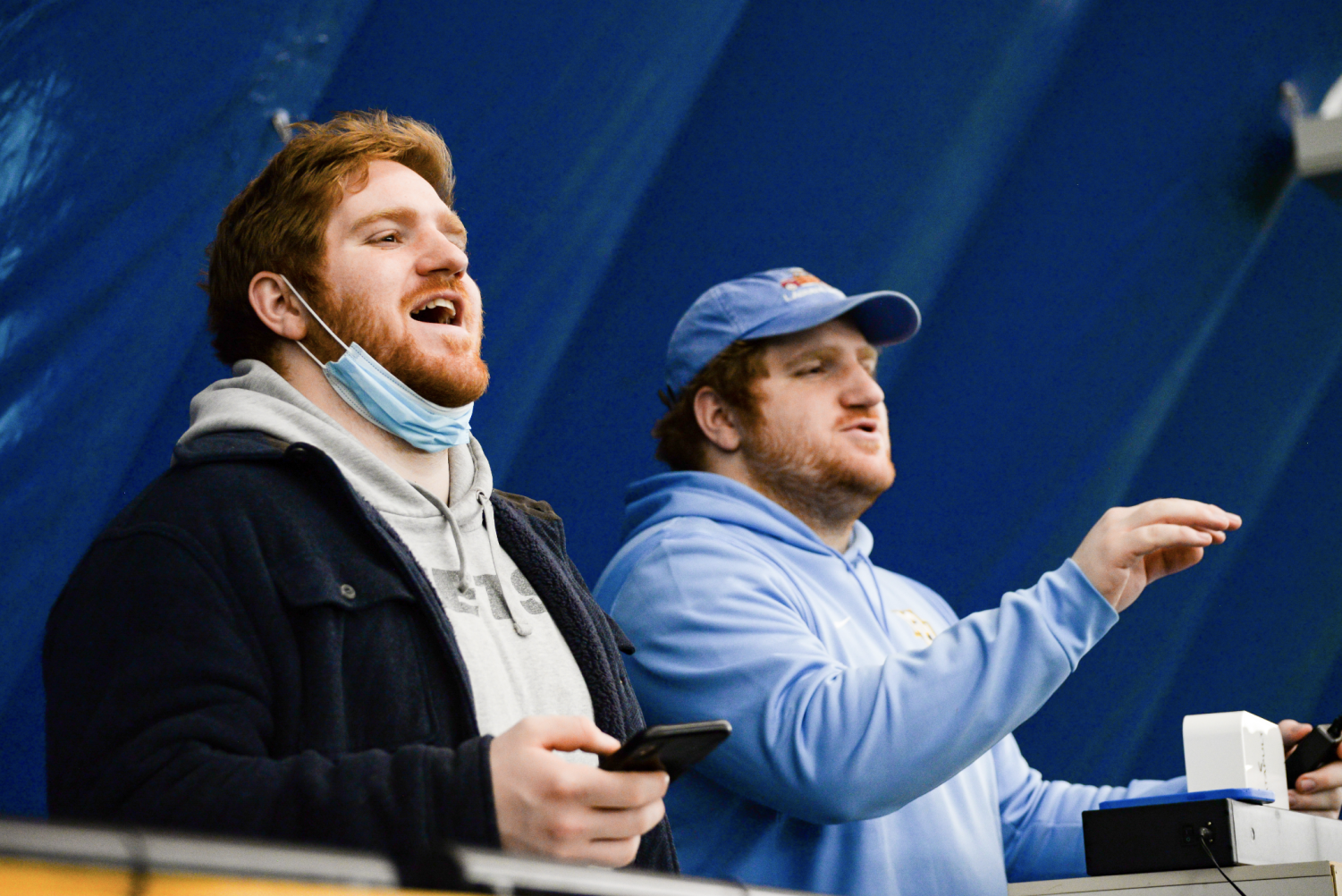 Nick and Joey Artinian cheer for the men’s lacrosse team from the sidelines. (Photo by Sarah Kuhns)

Nick and Joey Artinian cheer for the men’s lacrosse team from the sidelines.

Marquette men’s lacrosse is a tradition that runs deep in the Artinian family, however, you’ll never see the family wearing bulky helmets and padding. Instead, you’ll find senior twin brothers Nick and Joey Artinian on the sidelines, screaming chants and clapping simultaneously.

The two brothers have an important role behind the scenes as team managers. They ensure the lacrosse team achieves success, whether that’s handling the team’s general operations, enhancing the team’s social media presence or assisting with recruiting.

There are five Artinian siblings: Emily, Peter, Chris, Nick and Joey. Four of the five siblings have served as a Marquette men’s lacrosse team manager during their undergraduate education at Marquette.

When Amplo came to Milwaukee to serve as Marquette’s first men’s lacrosse coach in 2011, Emily Artinian was arriving at Marquette. Chris and Jay Artinian reached out to Amplo asking if there were any open job positions on the team and Amplo immediately hired Emily. She served as the team’s first student manager from 2012-2016.

Current Marquette men’s lacrosse head coach Andrew Stimmel, who originally served as assistant coach and defensive coordinator at Marquette back in 2016, says that Emily’s contributions were greatly appreciated during the early years of the program. Stimmel was able to work with both Emily and Peter Artinian during his time as assistant coach and defensive coordinator.

“They’re an incredible family,” Stimmel says. “The word that comes to mind for all of them is servant leaders, and I think that’s such a good example for the guys on our team.”

“He was a ton of fun, really passionate about the sport and about the team,” Richard says. “And then his twin brothers came in and made a splash immediately. I think the common theme with them has just been the energy they’ve brought from the start.”

When Nick and Joey arrived at Marquette in 2018, they chose to follow in the footsteps of their older siblings.

“I just thought ‘why not?'” Joey Artinian says. “It’s a great chance to meet people and I always like being a part of a team.”

While the twins do not occupy a spot on the roster, redshirt junior defender Zach Granger says their role on the team is just as important.

“I want to play for those guys because they’re so passionate about it,” Granger says. “They’re part of our team, part of our family.

Granger says one of his favorite memories was when the twins dressed up in sumo suits and battled one another before a game three years ago.

“If I was a manager for a team and I was asked to go up against my brother in a sumo suit in front of the whole team, I’d be like, ‘Oh, I don’t want to do that,’” Granger says. “But they embrace it, and it was like this huge thing. It was awesome.”

That moment was just as memorable for Nick Artinian.

“I lost, I’ll never forget that, it was brutal,” Nick Artinian says. “With all the guys cheering it was the greatest way to probably start off my (first year).”

Granger says this passion extends outside of lacrosse, during their 3 v. 3 tournaments together at the Marquette Recreation Center.

“They’re their authentic selves when they’re here, and I think it’s awesome to see them outside in a different arena,” Granger says. “Their passion for the things that they’re passionate about shows outside the field, and they’re very true to themselves wherever they are.”

Even though the twins have been around for three years, Stimmel says it can still be difficult to tell them apart.

“Nick definitely laughs at my jokes a lot more and Joey really makes me work for it,” Stimmel says. “I really have to work and come up with something creative for him to really laugh.”

While players and coaches had no comment about their favorite Artinian sibling, the twins did not hold back.

“I think I’m more versatile than my brothers, I do a lot of the social media side,” Nick Artinian says. “I’d throw my name in the hat there.”

This debate led to a bickering match back and forth between the twins, but they ultimately came to a fair conclusion.

“I think we know pretty much the same,” Nick Artinian says. “We constantly call each other out on what things we do and don’t know, I think we both play well do each other’s strengths.”

The twins bring this sense of family to their job every day, and Stimmel says that it has led to more people wanting to be part of the program.

“If you look at anybody who’s responsible for that, it’s the Artinians,” Stimmel says. “We’re just super grateful to them and leaving that legacy and I’m sure it’ll be something that our new managers will continue to carry on in the future.”

This article was written by Aimee Galaszewski. She can be reached at [email protected] or on Twitter @aimeegalsMU.