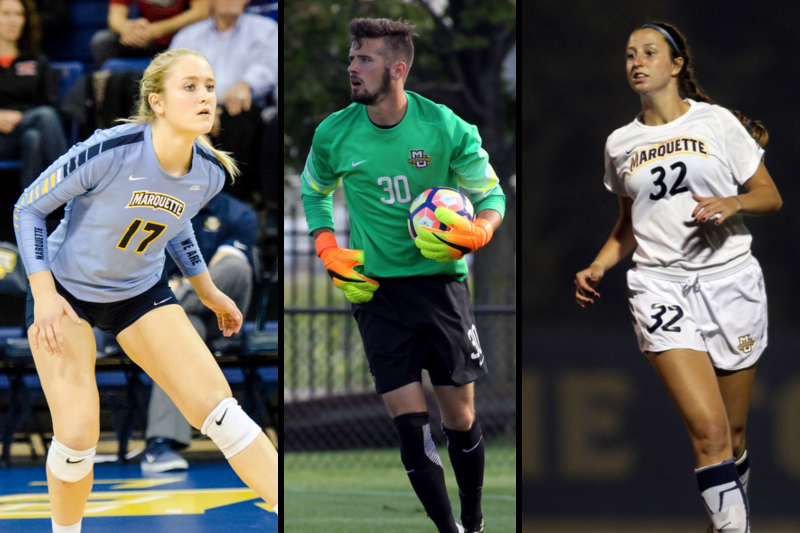 Fall sport athletes get one semester to live as normal students. How do they use it?

The student athlete lifestyle at Marquette is rigorous, constant and rewarding. With few days off and a brutal BIG EAST travel schedule, student athletes’ experiences are an extreme departure from typical student life.

“It feels like 20 hours a week including film and practice sessions,” women’s soccer player Lisa Roman said. “Then game days are about seven hours, maybe six hours. It takes up a lot of time.”

That’s before factoring in away games.

However, for athletes of Marquette’s three fall sports teams, men’s and women’s soccer and volleyball, senior student athletes spend one semester on campus away from the sport which dominated their lives.

“I have so much free time. It’s amazing,” Roman said.

“It’s fun to be a normal student,” Roman continued. “You have time to work out on your own. I don’t have to worry about waking up super early so I can stay up later and be more social with other people.”

For college seniors, one final semester isn’t just a chance to socialize and catch up on sleep. It’s an opportunity to do things they could never do when they were student athletes.

Former men’s soccer player Mac Wheeler had a redshirt season, meaning his senior season was his fifth year. Wheeler graduated in time to free up one semester before he returns to Marquette for physical therapy school.

The former Golden Eagle goalkeeper saw this time as a unique opportunity to do something he could never do while playing a Division I sport: volunteer in Costa Rica.

“I had a free semester, so I was like, ‘Alright, well, I kind of speak Spanish,’ but I wanted to work on it more. I wanted to go to Latin America,” Wheeler said. “So I came to Costa Rica, and I’m volunteering here during the week and then the weekends I get time off to travel.” 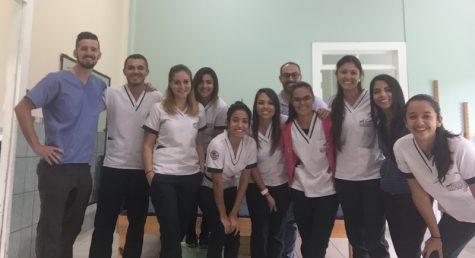 Wheeler will be doing free physical therapy for local residents living in a retirement home alongside students from a Costa Rican university until May.

“The university will send over their physical therapy students,” Wheeler said. “The students take it as a class. So, they basically do physical therapy for free for all the old people. I kind of just help out with that.”

Wheeler had nine semesters at Marquette to dream of what he might do when he finally had four months without a commitment.

“It’s always something I really wanted to do,” Wheeler said. “With the soccer team, it was always really tough. There never really was any free time to go out and leave for a couple months at a time.”

For Wheeler, this semester signaled a shift in a new direction for his life and a period of transition.

“It’s a new chapter of life,” he said. “Those pro aspirations didn’t really shake out. So, it’s kind of just time to close this chapter and move onto a new one. It’s sad to stop doing something you’ve been doing for so long. Especially at Marquette, it was just a huge part of my life. I enjoyed every minute of it. I took advantage of everything that I could and I’m excited for what’s to come.”

Roman enjoyed her student athlete experience as well, but this semester has given her an opportunity to earn her first internship experience. A journalism major, Roman is trying to break into sports media, so this semester she’s interning with Fox Sports Wisconsin.

It was tricky with her soccer schedule to gain on-air experience. When she tried to volunteer with MUTV, Marquette’s student television station, it was no small task.

“I would have class all day, then we would have practice from 3 to 5, but practice never ended at 5,” she said. “It usually went until 5:30 and we had to be here at six and I’d be sweaty from practice and I’d want to go on air.” 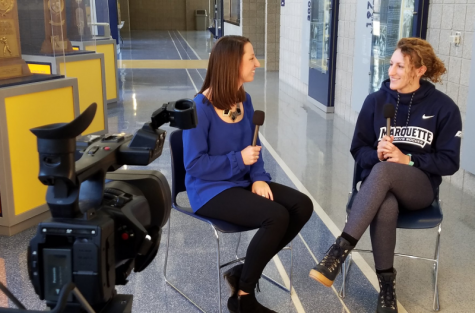 But those were the steps she had to take to prepare herself for the professional world.

“Otherwise it’s like, ‘Oh you’re trying to be an on-air talent, and when have you ever done this?’ Well, never,” Roman said.

Gaining professional experience has been one perk of her final semester, but Roman has taken advantage of her free time in other ways too.

“I’m from Philadelphia and people always wanted to visit me and it’s like, well, I have practice for three hours, so you can hang out in my apartment or explore Milwaukee by yourself, and they’d be like, ‘Okay well that stinks,’” she said. “If friends would visit and we have a game on Sunday, I don’t see them. We have breakfast at 9, then we have to be there at 1:30, and then our game is usually at 3 and we don’t get done until 5, then we have to eat after and then I see them.”

Former volleyball player Lauren Houg is using her semester to gain professional experience as well. As an education major she’s required to do a semester of student teaching before she graduates, something she couldn’t do in the fall or the spring while she was playing.

In order to finish the classes for her majors in education and communication studies, Houg had to take multiple 18-credit semesters, and on two occasions, summer classes. Despite all that, she was still taking some of her most important courses during her final semester of play.

“Last semester was my busiest semester,” Houg said. “I really had to start balancing that professional versus student athlete mindset during the middle of the season while I was competing for the Marquette volleyball team, knowing that in a few short months I would be in charge of a classroom.”

Like Wheeler, Houg is navigating a new path as her student athlete chapter ends.

I feel like I’m trying to figure out who I am without volleyball. It sounds cliche but it’s true.”

“It’s been a very weird, different transition into that (professional) aspect,” Houg said. “I feel like I’m trying to figure out who I am without volleyball. It sounds cliche but it’s true. … Not only do I have more free time, I have more of myself to show other people and talk about. I’m not just a volleyball player. I’m a teacher, an older sister, a friend. It’s just funny how much more time you can devote to other parts of who you are. But it’s fun to fill that free time with new thing.”

Her new passions aren’t all scholastic. Houg recently discovered an interest for cooking.

Though she said it’s not necessarily easy to feel your identity changing.

“It’s kind of scary because you’re so used to walking in and being like, ‘Yeah I’m a Division I athlete, I’m great at something.’ Now it’s like, I don’t have that anymore,” Houg said. “I’m not a great teacher yet. I have to relearn about how to be a great learner.”

For all three, it’s an exciting new time as they exit their lives as student athletes and head toward the workforce, but even as they grow into their new identities, they remain the same people who came to Marquette as athletes.

“One of my buddies I met at the elderly home, he plays with a third-division team here in Costa Rica and invited me to come train with the team,” Wheeler said. “It was really cool. It was nuts. A little different facility-wise than what we had at Marquette, but it was still a lot of fun.”