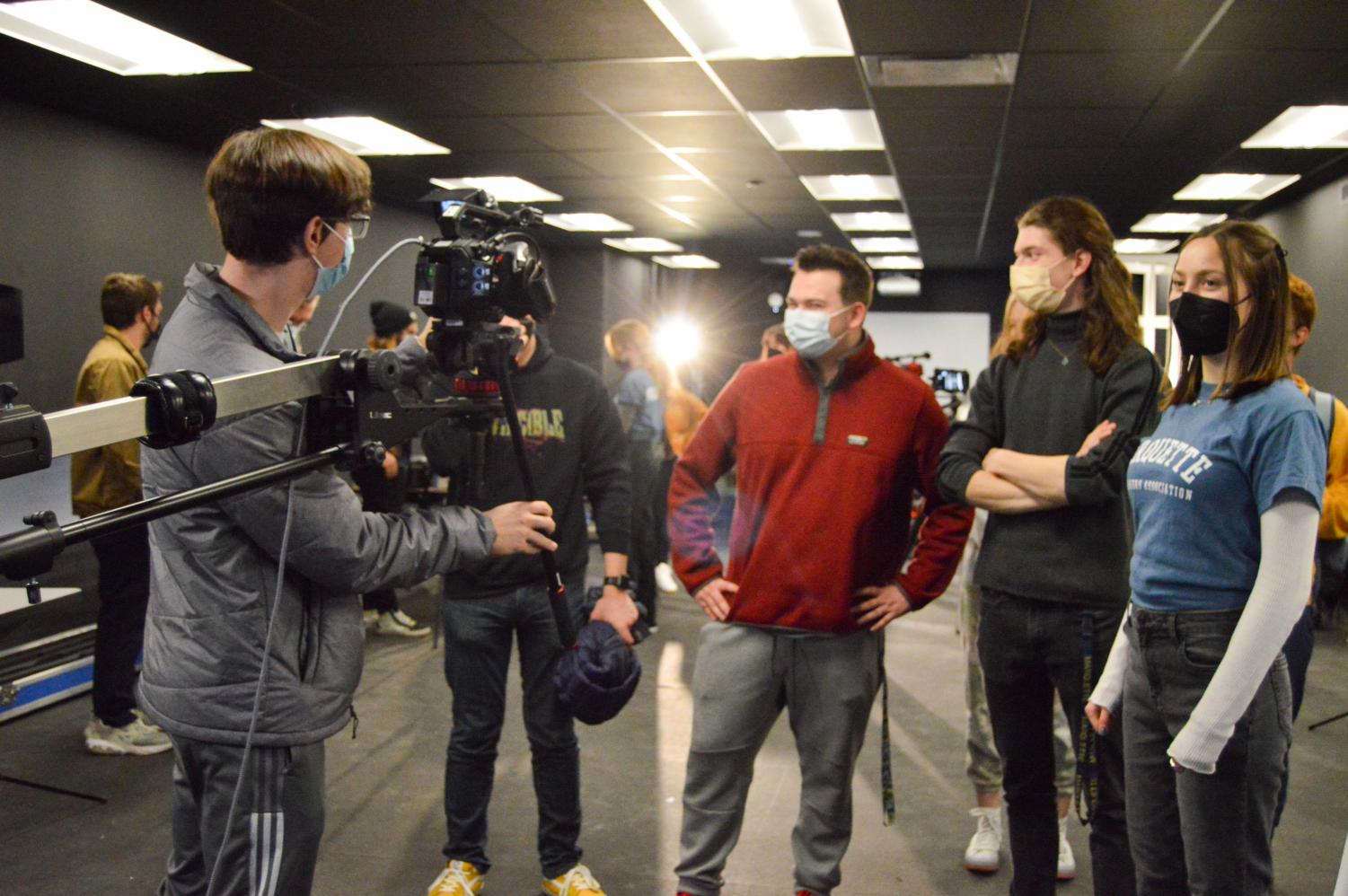 Members of MFMA, along with help from student volunteers and the Marquette Theatre Department, meet in the basement of Johnston Hall. (Photo by Isabel Bonebrake)

Members of MFMA, along with help from student volunteers and the Marquette Theatre Department, meet in the basement of Johnston Hall.

Many people may know this feeling: Sitting in a theater, popcorn bucket in hand, accompanied by a small group of your closest friends that were excited to make the trip with you to the nearest cinema. After waiting for what seems like forever, it’s time. The lights go down, the screen comes to life and just like that you are enamored, you have been sucked in to a different world, even if it is only for a couple of hours.

Now think about what it would be like to see your own movie on the silver screen.

For members of the Marquette Filmmakers Association, that thought is something they don’t have to imagine. Over the course of the semester, they write, plan and create their own short films for their film screening event May 6 in the Wakerly Media Lab in Johnston Hall. Members of MFMA, along with help from student volunteers and the Marquette Theatre Department, work together to get the pivotal shots and capture special moments on film that they hope will resonate with viewers in the Marquette community.

MFMA opened its doors to students during the spring 2021 semester. Due to the COVID-19 pandemic, the group had to meet and create virtually until the beginning of this school year.

Margaret Weiner, vice president of MFMA and sophomore in the College of Communication, says the group has seen a large amount of interest from students wanting to be a part of film crews for the eight short films that are being produced this semester, even receiving over 100 email signatures at the spring O-Fest.

“It’s really cool to see people passionate about what they do. To see everyone in their element with cameras, it’s a really special process to be a part of,” Weiner says.

Last semester, Sophia Albano, a junior in the College of Health Sciences, was able to see her film idea come to life. Her short film, “Do You Remember Me?,” tells the story of how her parents met and fell in love. Albano says seeing her idea come to life was an unreal experience as she had never operated a camera or written a script before taking Marquette’s summer scriptwriting class.

“It is the greatest feeling!” Albano says. “It’s crazy how something in your head actually comes to fruition. It was something that I was thinking of just in my head, but to actually get a film out of it, to press ‘play,’ it’s an incredible feeling.”

Albano, MFMA’s event organizer, noted the importance of representation in film and the power that it holds in society. She says that in writing her film, she wanted to tell a story that was real, one that people could identify with, one that could reach outside of Marquette.

“Film has the power to show people in a different light, in a normal light. Like, my mom can get the jock,” Albano says.”Anyone can do anything, and I think that being represented in film can make some many leaps and bounds in society.”

The ripple effects that Albano mentions have already started to take form. Films like Marvel’s “Shang-Chi” and “Black Panther,”  two films to have majority-Asian and majority-Black ensemble casts, respectively, prove the world of film is getting larger and is beginning to share the microphone with diverse voices.

Even animated feature films like Disney’s “Encanto” have made huge strides in depictions of diversity in film. One Instagram post shared by Kenzo B. (@katchingupwithkenzo) went viral featuring a little boy named Kenzo who shares a striking resemblance to Antonio Madrigal, one of the characters in the film. The post amounted over 12 thousand likes under the #representationmatters.

“The thing about film is that it’s someone’s perspective and it’s someone’s eyesight, and you get to see that and experience that through levels of empathy or emotion best conveyed on screen,” Trevor Tosto, MFMA president and junior in the College of the Communication, says. “I don’t think there’s another art form that really does that like film and being able to see a different perspective can really change the way that you think.”

And for Weiner and Tosto, there is a beauty to the expression and evoking thought processes that the medium of film offers in today’s world.

“I think it’s just really fascinating that you can share these experiences and when films come out you are able to ask questions,” Weiner says. “Why is it important that we release this film now? Why is this story important right now? What can people learn from it? And I think that’s really powerful. Even if it’s just funny, because people just need to laugh right now. I think that is something really beautiful.”

Even when the screen fades to black, and the lights come up, Tosto and the MFMA are ready to express themselves and their ideas in the best way they know how: Multiple shots of multiple angles, all in the process of finding that new perspective.

“It’s an art form and, I don’t know, it just sometimes catches me off guard how beautiful it can be,” Tosto says.

With all that in mind, Tosto and the rest of the filmmakers are shooting scenes, stepping back, changing angles and shooting again in the hopes or achieving more than a completed film. For them its simple: change the angle, change the perspective.

This story was written by Kim Cook. She an be reached at kimberly.cook@marquette.edu.