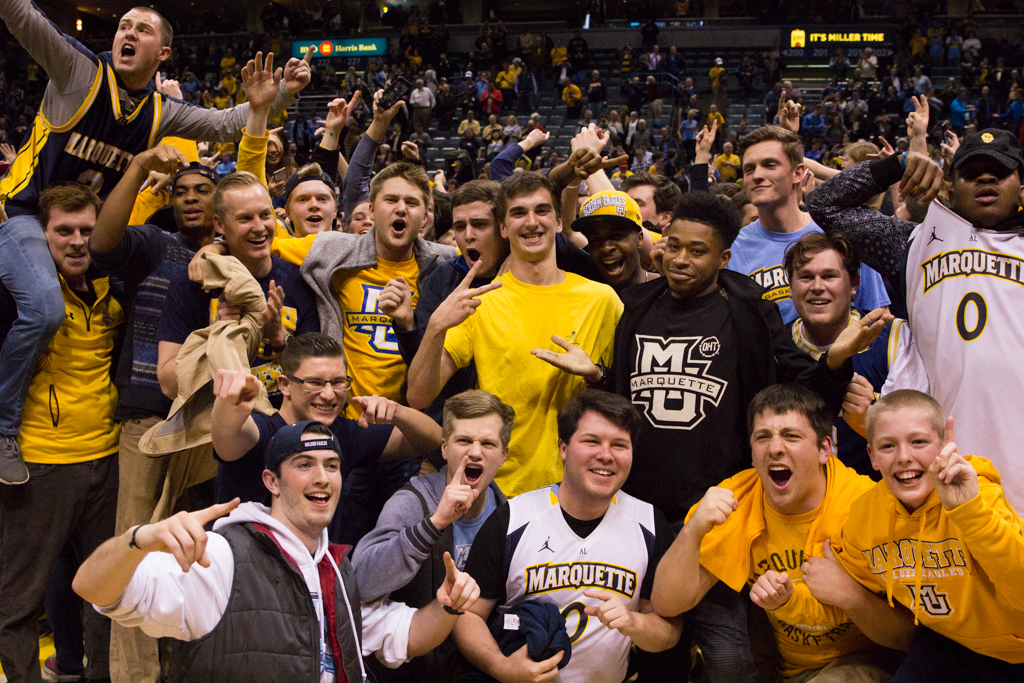 When Marquette defeated No. 1 Villanova last year, fans stormed the court, providing lasting memories even for those that weren’t at the game. (Photo by Austin Anderson)

When Marquette defeated No. 1 Villanova last year, fans stormed the court, providing lasting memories even for those that weren’t at the game.

Zachary Newman’s mother never called him multiple times in a row unless it was something important. As soon as the 2012 Marquette graduate received three calls from her within a span of several minutes, he thought something tragic had happened.

That is how Newman found out about Marquette’s 74-72 upset victory over the No. 1 Villanova Wildcats, an event that he would have seen in person on almost any other day. Newman had been a season ticketholder for 10 years and appeared at most games. This time, a business trip to Las Vegas kept him away from his family and the BMO Harris Bradley Center.

“It was disorienting at first; a lot of loud noises with the fans running on the court,” Newman said. “It was quite a surprise, and that immediately turned to FOMO (fear of missing out).”

For all the hullabaloo of the Villanova upset, comparatively few people were actually there to witness it. The stated crowd of 14,210 fans was the sixth-largest home crowd of the year out of 17 games and just barely edged Marquette’s average 2016-’17 attendance of 13,716, per athletics.

The Tuesday night matchup that most people thought would end in a swift Marquette defeat meant one thing: a lot of people missed the upset and regretted it later.

“From a fan perspective, that I’d been to nearly every home game for over a decade, I was annoyed,” Newman said. “I guess that’s the nicest way to put it.”

Emily Schroeder, a recent alum and pre-school teacher in the area, usually would have been there too. Not this time, though. She missed one of the biggest moments in Marquette history not because of a work trip, traffic or family commitments, but because of bad hummus, which gave Schroeder food poisoning.

“I had it the night before, probably 24 hours before tip,” Schroeder said. “I stayed home from work the next day and I probably could’ve pushed myself to go to the game, but I didn’t want to get sick at the game.”

Marquette’s comeback prompted Schroeder to get out of bed for the first time in several hours. She couldn’t stop moving and jumping up and down.

“When they ended up winning, I was actually tearing up. I was both excited that they won but so disappointed that I didn’t go.”

Some didn’t have much choice but to miss the game. It was the beginning of Panhellenic recruitment, which meant hardly any sorority pledge or active sorority member was at the game, eliminating almost 800 students, according to the most recent Greek life report. Students in night classes or studying abroad were also unable to attend, which added hundreds more to the ranks of the absent.

Molly Pfeiffer, a Class of 2017 graduate and former women’s soccer player, was starting a sports performance internship in Palo Alto, California, with Stanford University to acquire the last few credits necessary for graduation. After a long day of work, Pfeiffer returned home in time to watch Marquette’s final stand.

“I went into my room and kind of started tearing up,” Pfeiffer said. “It was kind of early on into when I was away and was still kind of adjusting and everything.”

Unlike most people that missed it, Pfeiffer had a personal connection to the participants as a student administrator for two years and left just weeks before the upset.

“I immediately FaceTimed Anthony Ball, who was one of the basketball managers and one of my best friends,” Pfeiffer said. “The next day I wore a Marquette hat into work, which probably wasn’t the smartest idea. But everyone at work knows how much I’m obsessed with Marquette.”

It didn’t look like those that missed the game would have much reason to worry initially. Villanova surged to a 15-point halftime lead, shooting 51.7 percent from the field against an outmatched Marquette defense. At that point, Newman said he stopped watching and went to dinner with potential clients.

“Considering the deficit, I thought (leaving) was a mercy,” Newman said.

Tim Kraft, a 2010 graduate and season ticketholder, was in nearly an identical situation as Newman. After more than six years without really traveling for work, Kraft had a Jan. 23 trip from Chicago to Houston, to meet colleagues at his new job. Usually, Kraft drove up to Milwaukee from Chicago with his best friend for every home game. The Villanova upset was an unfortunate exception.

“The game was on … and things didn’t look good for Marquette early on, which was almost a relief to me,” Kraft said in an email. “If Marquette were to ever knock off a No. 1 team, I wanted to be there.”

Instead, Kraft watched the game from a hotel bar because he didn’t have Fox Sports 1 in his room. He asked for the check and was ready to leave with Marquette still down 15 and nine minutes left on the clock. When the bill arrived, Duane Wilson hit a 3-pointer to cut Villanova’s lead to 10 points with just over five minutes to go, which convinced him to stay and watch the end.

When the final buzzer sounded, Kraft celebrated in style. “After buying a round of shots for the four random people at the bar, I went up to my room and just fist pumped and jumped around,” he said.

Somewhere in between jumping around and drinking at a Buffalo Wild Wings across the street until the 2 a.m. closing time, Kraft made three calls. The first was to his older brother, who went to the game and almost left early, but didn’t. “I think I told him I loved him, which I do, but I just don’t say it after every (Marquette) game,” Kraft said.

The next call was to his friend Christian, who was in the building that night. “The first thing (Christian) said was, ‘Timmy, I can’t believe you missed it,’” Kraft said. “I told him it looked awesome, but that I hated him, and I was beyond jealous.”

Kraft’s third and final call was to his father. “I’m pretty sure I cried,” Kraft said.

If the magnitude of a sporting event is defined by raw emotion, its ability to move those who witness it and interact with circumstances far away from the playing surface, then the Villanova upset may have been the most consequential game of Bryan Dee’s life.

Dee, a radio host and producer at ESPN Milwaukee that graduated Marquette in 2014, broadcasted a pregame show from the BMO Harris Bradley Center as he usually did, then got in line for a beer five minutes before tipoff. That’s when Dee received a call from his mother telling him his grandfather had died of cancer.

“He was fighting it for a while, and we kind of got the impression that he wasn’t doing as well,” Dee said. “You never want to think about something like that happening.”

Dee stayed to watch the first half before returning to his apartment to pack his bags and find a flight to New York. After booking a plane ticket for two days later, Dee watched the rest of the game at his girlfriend’s apartment. Duane Wilson’s stutter-step layup, which cut Villanova’s lead to six, made him believe that something special might be happening.

“You kind of started to think ‘OK, maybe they’ve got a shot here, maybe they’ll be able to pull this off,’” Dee said.

Sam Hauser’s final rebound brought Dee a measure of peace. Life had brought him down, then picked him up again.

“One of my favorite things in life is Marquette basketball … and they have arguably their greatest regular season win ever,” Dee said. “It’s funny how life has this innate way of evening itself out in one of your lower moments.”

Two days later, Dee was going through some of his grandfather’s possessions when his father found the mug that Dee’s grandpa had been drinking tea out of for the last few months of his life. It said “Marquette grandpa” on the front. The moment Dee saw it, he teared up. “It just brought everything full circle.”

Things are nearly the same in 2018 as they were in 2017. Marquette is playing No. 1 Villanova Sunday, Jan. 28, just four days after the one-year anniversary of a night that’s permanently etched into the mind of seemingly every Marquette fan, even those who missed it.

The Golden Eagles are currently 13-6 overall and 4-3 in conference, the same records with which they entered last year’s Villanova game, although a matchup against Xavier on Wednesday will slightly alter the numbers.

And just like last year, almost every person interviewed for this story will not be at the BMO Harris Bradley Center.

“It’s going to be one of the few games I’ll miss this year,” Dee said. “I’m going to be out of town in Cleveland visiting a buddy of mine. I’m the best man at his wedding.”

“I was offered a trip to Florida for free and I was actually considering passing that up so I wouldn’t miss the game again,” Schroeder said.

“It’s kind of tough because I do have a lot of friends that are still in the Milwaukee area and the Chicago area,” Pfeiffer, who still has time left in her Stanford internship, said. “I’m sure when the day approaches, things will be nerve-wracking.”

Newman moved out to California last year and will be watching the game with an alumni group. “If we win two in a row against Villanova, I’m going to have to fly back for the third one (next year),” Newman said.