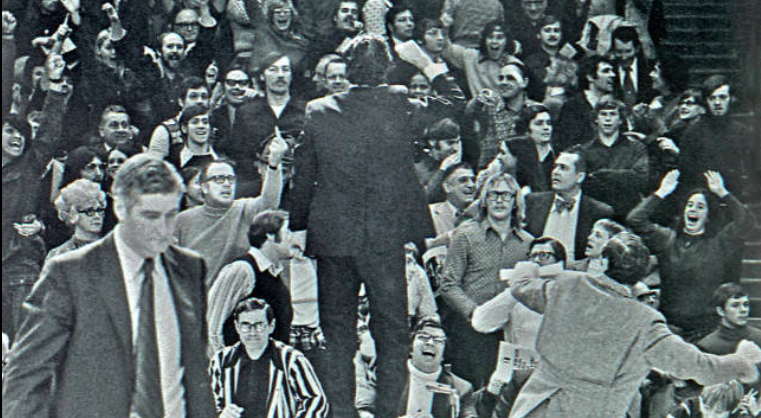 Mike Gonring’s copy of the photograph is signed by Al McGuire and reads, “Happiness is beating Wisconsin.” Bob Wolfley has a copy of the picture at his home. Even former Wisconsin guard Dale Koehler possesses a copy of the image marking one of the most grueling losses in Badger history.

Forty-three years later, the photo lives on and dives deep into the heart of the now-century old Marquette-University of Wisconsin-Madison rivalry.

It’s a Tuesday night in February 1974. The Wisconsin Badgers traveled 80 miles east for a chance to score a victory against their in-state rivals for the first time in five years. Milwaukee Sentinel photographer Bob Miller knew the best way he could capture the moment was to follow Al McGuire.

Several minutes before the photo was taken, McGuire found himself down 52-45 to the Badgers with 4:48 left in the game. Wisconsin saw a victory on the horizon, but three consecutive turnovers allowed Marquette to pull itself back into contention. Down 58-57 with 17 seconds left, Marquette fouled Wisconsin big man Kim Hughes, who missed a bonus free throw just a few minutes prior. Before he could redeem himself, McGuire called timeout.

Maurice Lucas, a 6-foot-9 power forward with NBA-ready basketball skills but hardly any perimeter shooting skills, grabbed the rebound and began dribbling the ball with only seconds on the clock. He briefly fumbled it, regained control, and let it fly. The ball soared about 20 feet across the court.

“The place, it was the loudest indoor noise I have ever heard,” said Mike Gonring, Marquette basketball’s sports information director at the time. “It was incredible roar with this blizzard going on outside. I know friends of mine that conceived that night and named their child Luke. It was unbelievable.”

In the midst of the mayhem and jubilation, McGuire knew how to feed the crowd more. He jumped up on the scorers’ table and hoisted his fists to the crowd.

“All I remember is turning around and I’m like, ‘Coach is on the damn scorers’ table. What hell are you doing up there?’” Marquette guard Lloyd Walton said.

“Well, I thought it was a little over the top,” Badger forward Dale Koehler said. “But, whatever, everybody celebrates in their own way.”

Miller took a photo of him that would have already been iconic, but it became even more so when Glenn Hughes, father of Wisconsin’s 6-foot-11 centers Kerry and Kim, rose up from his seat and raised his middle finger toward McGuire.

“That’s very atypical for him,” said Kerry Hughes. “A very conservative man, great father, real good businessman who never imagined in a million years that he would do that. I could understand how he would after being a father and stuff; he was so disappointed for his sons. But that did surprise me.”

Glenn Hughes, a former Air Force veteran, gas station owner and president of the school board, had never missed one of his sons’ high school or collegiate games. Despite the 16 inches of snow in Milwaukee that evening, Hughes was sitting about two rows behind the scorers’ table in time for the tipoff.

Kim and Kerry had never beat Marquette and McGuire. Their last chance to see the look of defeat on McGuire’s face just slipped away. The Hughes family were reserved, humble Midwesterners. Only the flamboyant actions and perceived arrogance of McGuire caused the elder Hughes to crack.

“McGuire was particularly loathed by Wisconsin,” Wolfley said. “They had disdain for Marquette basketball, but they loathed McGuire because of his personality. He was from the east. Obnoxious is a word you would hear a lot, that he was a showman. He just didn’t fit well with some Midwestern basketball fans.”

Marquette’s coach was known to be disinterested in practices and often had side conversations as his assistants Hank Raymonds and Rick Majerus ran the show, but he was at his best during games. “He understood the theater of basketball, and game time is showtime,” Wolfley said.

“It was like that with Al where ever we went,” Walton said. “‘He would always say ‘Just play the game, I’ll take care of the crowd.’ And he’d walk out there make some kind of face or say something and then the crowd would focus on him and not on the players. He was a master of it, man. He knew how to do it, get the crowd on him, get them focused on him, and just let the team go to work.”

Most coaches are concerned with their players’ preparation. McGuire was equally concerned with the arena attendance. He didn’t require dress codes while traveling and encouraged his players to speak their minds. He was not a coach of his era, or any era for that matter.

Despite the organized chaos McGuire fostered in the program, his players displayed on-court discipline and precision, as did Wisconsin. The difference is that McGuire ended games chest-thumping on the scorers’ table.

“John Powless would have to be on LSD to (get on the scorers’ table),” Gorning said. “He would be the last person in the world to do that.”

The morning after the game, the Milwaukee Sentinel decided to take a more drastic approach and run Miller’s photo with Hughes’ finger airbrushed out, but Dwyre decided to run the full photo that afternoon in the Journal, much to the dismay of Badger fans.

“The Wisconsin fans were horrified,” Dwyre said. “If every one of them cancelled their subscription who said they would, we would’ve gone out of business. The Marquette fans were delighted.”

Time is unable to completely wash away a rivalry, but it softens the sting of the moment.

“It’s almost become predictable because (when) they sent it to me after it first happened at the end of our senior year, it wasn’t funny then,” Kerry Hughes said. “Then, after 10 years it was funny; after 20 it was hilarious. My brother and I talked about it and I finally talked to my dad about it. He passed away two years ago, so I can’t tell him that he’s still famous 40 years after the event.”

“He’s probably up in heaven looking down and finally laughing about it.”