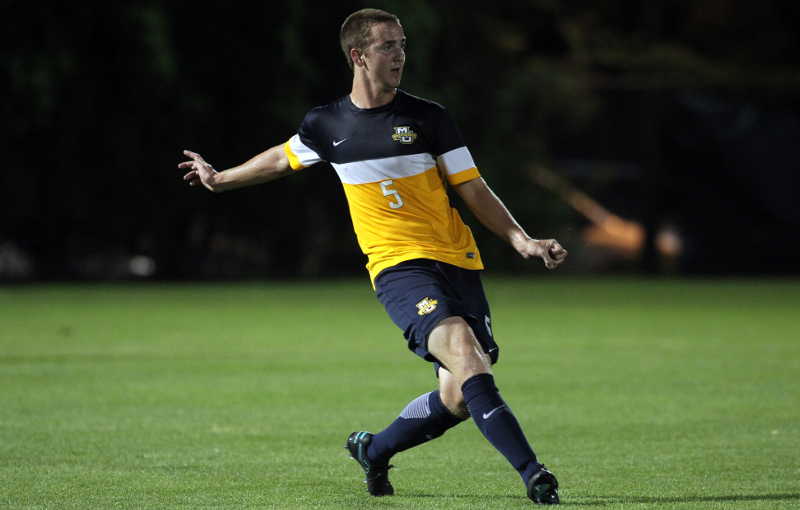 Danny Jarosz played only 13 games at Marquette before retiring from soccer.

Danny Jarosz always knew the concussions would catch up to him. By his redshirt sophomore year he was already diagnosed with five, including one that kept him out of the entire 2015 men’s soccer season.

It could have been sudden. His position, center back, made him highly susceptible to collisions. One more big hit or funny fall, and his career could have ended on the spot.

But it wasn’t like that. The concussions crept up on Jarosz, with lingering side effects from his previous ailments dragging his playing time to a halt.

“It was never something where I had to go to the dark room or anything,” Jarosz said. “It was impacting my concentration and my focus. … That may have been the most frustrating part of having these nagging headaches that just keep going on. They’re not debilitating, but they’re not going away to have that headache-free day.”

He didn’t tell anyone because he knew what it probably meant. But staying silent didn’t make the headaches go away. Eventually it started to affect both his schoolwork and his play on the field.

With four games left on the schedule, he accepted reality. He went to the team’s medical staff, hoping to fill them in and finish out the season. The team doctor had different plans, telling Jarosz he was done on the spot.

“You kind of go through all the emotions: being sad, being mad, being frustrated, being in shock,” Jarosz said. “Those first couple weeks were tough. … There were many sleepless nights, just trying to grasp it and trying to think about never being able to play soccer and all the time and effort and sweat that you put into it over the years.”

The doctor’s decision brought an end to a promising but short-lived career. Jarosz was the Milwaukee Journal Sentinel’s Area Player of the Year as a senior in high school. He was expected to be a valuable piece before he was injured in his redshirt sophomore season, and he lived up to the billing as a redshirt junior.

“I had a dream of playing college soccer and a dream of playing professional soccer,” Jarosz said. “It started back when I was wearing cleats to mass on Sunday. … You feel like you had so much more to prove, so much left in the tank, and all that work you put in, it’s not a waste but it’s kind of unfulfilled.”

“It slices a bit of your heart out,” said head coach Louis Bennett, who has known Jarosz since he was 8 years old. “It’s an arrow in your heart, and it’s not cupid. There’s a lot of pain.”

Jarosz and the coaching staff decided to keep quiet about what was going on so the team wouldn’t be distracted.

It turned out not saying anything was an even bigger distraction, as Jarosz’s teammates wondered why one of the team’s top defenders wasn’t on the practice field.

Jarosz finally spilled the beans prior to Marquette’s match against Xavier.

“A few of us just started crying in the locker room,” Daniel Szczepanek said. “Danny was an unbelievable teammate, the heart and soul of our team.”

“That’s one of the moments I’ll never forget in my life,” Jarosz said. “That was the official end.”

There is a silver lining for Jarosz, though: Bennett wants to keep him in the program, and the young defender had expressed interest in coaching. The two sketched out a plan, and at the beginning of the spring semester Bennett offered Jarosz a student coach position. It’s given him an early start to build experience.

Jarosz is helping manage the video from the team’s practices and is working as an unofficial liaison between the coaching staff and the roster. Having sat in on the coaches’ meetings and been a player this year, he sees both sides.

“As a student coach, you hear things players don’t hear but you also hear things as a player and a friend,” Bennett said. “We’re bouncing things off so we know the perception that we have is accurate.”

“I know a lot of the younger guys especially will go and talk to him,” Szczepanek said.

Jarosz plans on staying in the role until he graduates at the end of next year, and he’s already made an impact. His persona as a player has helped him make an easy transition. Jarosz was a team leader and as a center back he had to see the whole field.

That doesn’t mean he still doesn’t yearn to get on the pitch again, especially when he wasn’t able to exercise over the past few months because of the concussion protocol. Remaining ingrained in soccer is a double-edged sword. He fuels his love of the sport, but is constantly reminded of what he no longer can do.

Even the 6 a.m. workouts are seen through rose-colored glasses.

“I just want them to get a perspective of how great their situation is as a Marquette student-athlete,” Jarosz said. “It can all be gone overnight.”