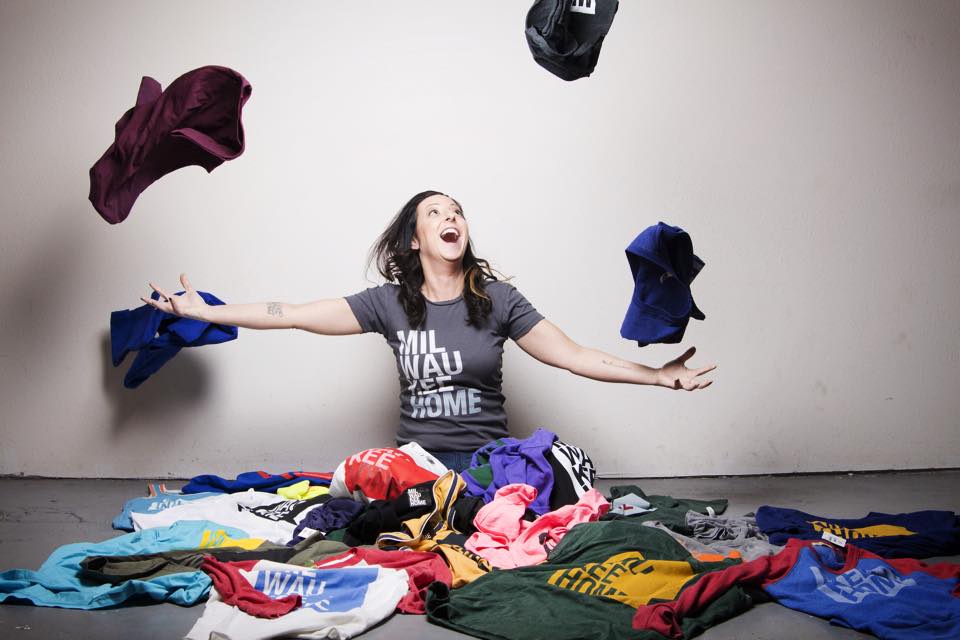 After living in Orlando, Florida, for five years and working as a creative consultant for a company called Cult Branding, Kuykendall came home to a completely different Milwaukee. Kuykendall hails from Mukwonago and graduated from the Milwaukee Institute of Art and Design in 2002.

“Not a lot existed in Milwaukee awhile ago,” Kuykendall said. “Most people didn’t know where it was. I came home to a much bigger nightlife and arts scene. I think this can be credited to bright youthful people taking pride in the city and wanting to build it up.”

After discovering this newfound excitement, Kuykendall designed a sweatshirt for a friend on zazzle.com as a Christmas present in 2011. The sweatshirt said “MilwaukeeHome” with the two words stacked vertically in all capital letters: MIL-WAU-KEE-HOME. The simple design stuck and is still the template Kuykendall uses for her designs.

When her friend wore the sweatshirt around town, people came up to him and asked where he got it. Kuykendall decided to design more apparel and sell the items out of the trunk of her car at local bars and coffee shops.

To spread the word even more, she started giving shirts away to local DJs, who got questions after shows about where they got the shirt.

“Soon my apartment was filled with hundreds of boxes of MilwaukeeHome apparel,” Kuykendall said. “I took that as a sign that it was time to get a store.”

Kuykendall rented out a storefront at 159 N. Jackson St. in 2012, which is still the store’s location. At the time she lived in half of the space and used the other half as her store. While initially trying to launch MilwaukeeHome, Kuykendall still worked for Cult Branding from her home in Florida. After the company had to make cuts, she was laid off and began dedicating all her time to further develop the brand.

Kuykendall’s mother Chris Thornton serves as the store manager for MilwaukeeHome. Thornton said it is amazing to watch the brand grow over the years. Kuykendall only has one other part-time employee to help maintain the shop.

“If you asked her father in the beginning, he would say it was just a T-shirt,” Thornton said. “It really means so much more to people.”

Over the past five years, MilwaukeeHome expanded through numerous partnerships. In 2013 the Milwaukee Bucks reached out to Kuykendall and other T-shirt designers to help create the Milwaukee Originals T-shirt line.

“The idea was to help bring a local aspect to the Milwaukee Bucks,” Kuykendall said. “It was amazing to see something I created on such a large scale as the NBA.”Photo by Austin Anderson

This will be Kuykendall’s fourth year working with the Bucks. Each year she gets new colors and logos to work with and create fresh, new designs.

“As a local business owner I have to be involved in the community,” Kuykendall said. “If you’re not supporting the community, they won’t support you.”

Nonprofits have not been left out of MilwaukeeHome collaborations. For September 2015, suicide awareness month, Kuykendall worked with Prevent Suicide Greater Milwaukee to launch a purple MilwaukeeHome T-shirt. Each shirt included a tag that explained the organization’s mission and how the community could get involved. For World Suicide Prevention Day, Sept. 10, Kuykendall offered a buy one, give one deal so customers could give the free shirt to a friend and help start the conversation.

Nathan Gerred, the public relations and marketing head for Prevent Suicide Milwaukee, said he wanted to work with MilwaukeeHome because the brand is so ingrained in the community.  Prevent Suicide didn’t ask for any profits, although Kuykendall offered. The shirts sold out within two weeks.

“When I first approached Melissa it was a little bit of a long shot,” Gerred said. “Her brand is so huge that really everyone and anyone is asking her do collaborations. Some organizations are also wanting to piggyback off of her popularity and I didn’t want to be that organization. I really wanted to drive home the fact that it was just for awareness and not for making a profit.”

The Prevent Suicide MilwaukeeHome collaboration didn’t happen in 2016 due to the organization’s busy schedule, but Gerred said he would like to try and collaborate with Kuykendall again this year.

Although Brew City will always be the heart of Kuykendall’s brand, the label went national in 2015 when the graphic designer launched Our Home City to help other cities show off their hometown pride. Each shirt includes a printed tag that reads “Established in Milwaukee,” reminding customers that the Home brand started in Milwaukee, while still enabling others to celebrate their homes.

Some cities represented by the brand include St. Louis, Philadelphia, Minneapolis, Austin, Atlanta, Boston and Chicago.

Kuykendall’s goal for the first half of this year is to put more merchandise online before it goes in the store. This will allow people around the world to have access to new designs if they can’t make it to the physical location.

Thornton often sees people with MilwaukeeHome shirts when her and her family are on vacation, which makes them feel like they are still at home.

“I’ve lived in many different states, but the people and history is what makes Milwaukee feel like home,” Thornton said.

Kuykendall said she loves Milwaukee for its tight-knit community. She said Milwaukeeans are always coming together to help improve the city.

Mercedes Meza, a Marquette 2015 graduate from the College of Nursing, still wears her MilwaukeeHome shirt with pride in New York City, where she works as a nurse.

“When you go off to college, that is your opportunity to make your own home, not the home your parents chose for you,” Meza said. “I always found Milwaukee very welcoming. I just moved to New York and I already miss Milwaukee.”