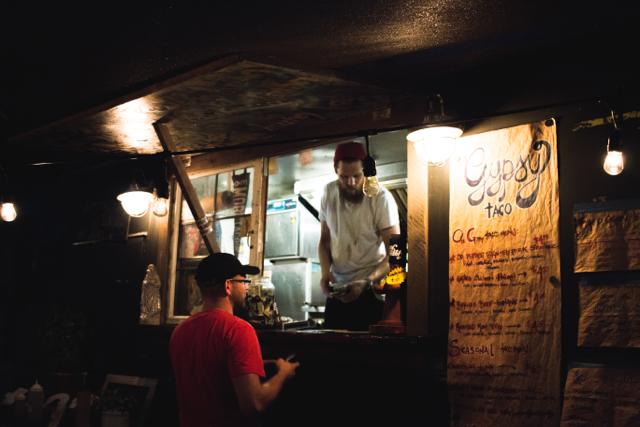 Chef Mitchell Ciohon’s creativity and authenticity stems from his “unapologetically unauthentic” attitude toward Gypsy Taco, Wisconsin’s only food truck that has regular, legal occupancy on a bar property.

In developing and sustaining Gypsy Taco, Ciohon has never wanted his food truck to be categorized as an authentic Mexican restaurant, nor to be consumed by the perfectionism of upscale dining. Gypsy Taco is located in back of Boone & Crockett on 2151 S. Kinnickinnic Ave and will be open year-round.

“Forget the labels and stop trying to put a name on what makes us so different,” Ciohon said. “Instead, focus on creating and serving powerful and delicious food.”

In May 2016, Gypsy Taco officially launched its partnership with Boone & Crockett, a craft cocktail lounge. The grand opening made Gypsy Taco the first food truck to have a “taco bar status” in the state of Wisconsin and was a huge success. Blocks of people lined up and down Kinnickinnic Avenue in Bayview to taste the quintessential Dr. Pepper pork and beef’s tongue tacos.

“There were so many people, and the tacos were so popular, we had to turn some of them down,” Ciohon said.

Ciohon developed the idea while living in Austin, Texas. Being immersed in a city that had an oversaturated food truck market, Ciohon knew not to open his own in Texas. Instead, he used his time down south to formulate business plans and complete research and development by sampling products from established food trucks. He observed potential ways he could differentiate his food truck from others in the Wisconsin market.

Soon after, Ciohon moved back to Door County, Wisconsin, where he sold tacos at local farmer’s markets.

“I started making breakfast tacos which parlayed into both breakfast and lunch tacos,” Ciohon said. “I knew I could make and sell anything at a farmer’s market. I went with my favorite food.”

His decision was well-received. This positive feedback continued the progression of Gypsy Taco.

When Ciohon decided to begin selling tacos under the Gypsy Taco brand, he started out in a trailer that was so small, he could barely stand in it. Soon after, the trailer was upgraded and “looked like an ice shanty that someone would ice fish out of.” It was much more sophisticated than the first, and included a window.

About a year and half ago, Ciohon decided to invest in Gypsy Taco’s evolution. He committed to a company that would provide, customize and fabricate a food truck.

“I decided to go with a company that seemed affordable and credible,” Ciohon said, “(The owner) sent me a full design of what the expected truck would look like and other renderings. He seemed very legitimate, so it had seemed like a perfect situation.”

Ciohon invested over $12,000 of his savings into a Georgian company that promised his truck in six weeks. By the sixth week, the owner of the company fell silent, and left Ciohon expecting the worst. He had been conned and was added to a list of over 20 other businesses and individuals who were also swindled.

In the midst of devastation, Ciohon illustrated perseverance.

“I had two options. I could lay around and feel sorry for myself, or I could get Gypsy Taco back on track,” Ciohon said.

Ciohon chose the latter and got back to work on Gypsy Taco. With his own hands, Ciohon converted one of his old catering vans into the Gypsy Taco truck that is used today.

“There are silver linings in all of this. Of course, it was incredibly defeating. But, I know (now) that what I have in the back (of Boone & Crocket) is mine,” Ciohon said. “That’s a very fulfilling feeling.”

This impediment was the necessary punch for Gypsy Taco’s success. Today, the taco stand averages 150-200 customers a day.

“The regulars of the bar were able to see the progression. They were there, with me, through it all,” Ciohon said.

What makes Gypsy Taco unique compared to other competing food trucks is Ciohon’s ability to bend classic culinary rules and infuse innovation to create beautifully constructed tacos. Ciohon has a lot of fun behind the window and admits that he doesn’t take himself too seriously.

“I wouldn’t say I am a rebel, but I don’t like to follow the rules. I understand rules, I appreciate the rules, and I like to learn the rules, but I also like to do my own thing,” Ciohon said.

Ciohon’s blending of traditional culinary rules are evident in many of his dishes. Interestingly, a go-to ingredient for Ciohon has been soda. He claims the fizzy beverage helps bring out a depth of flavors that could not be conjured up with traditional stocks or water.

One of Gypsy Taco’s most popular tacos is the Dr. Pepper braised pork taco, a concoction of flavors created by braising the pork meat in the black cherry soda. Another favorite is the braised beef tongue taco, which is flavored by balsamic vinegar and Coca-Cola.

With unique flavors and culinary style, it is fitting that the food truck has a unique name to match.

The name “Gypsy Taco” arose when Ciohon and his friend turned business partner John Revord, owner of Boone & Crockett, were in a biker gang called Gypsy Skulls. Ciohon’s brothers were also part of the biker gang.

“(We) viewed ourselves as self-proclaimed rebels,” Ciohon said.

Although the name “Gypsy Taco” is significant to Ciohon’s past rogue adventures, it more appropriately symbolizes his movement between cities and states, impacted by encounters with many different people and past travels. To Ciohon, the name characterizes his life as a chef.

Expansion of Gypsy Taco is expected in the future, though the van that sits in the back of Boone and Crockett will not leave anytime soon, according to Ciohon.

“Although we would love to have a brick and mortar or physical restaurant, the van is Gypsy Taco’s legacy,” Ciohon said.

Ciohon’s main hope for Gypsy Taco is to make some of the tastiest food in Wisconsin.

“All I want to hear is people talking about Gypsy Taco, all I want to see is people wearing Gypsy Taco merchandise and all I want to know is that people are enjoying the experience of Gypsy Taco,” he said. “If I am lucky enough to see any of these, I am happy and I know I have done my job.”

Genevieve Kenah, a sophomore in the College of Business Administration, said she visited Gouda Girls, a food truck location, in order to obtain food that wasn’t made by Sodexo.

“I tend to get bored with dining hall food, so trying something new at a food truck sounded good,” Kenah said in an email.

Bridget Drufke, a sophomore in the College of Communication, went to the Gouda Girls food truck in Morgan Park and at the Homecoming concert Oct. 8.

Because Drufke is a vegetarian, it is sometimes difficult for her to find food options that are suitable to her needs. However, she found mac and cheese and the grilled cheese sandwich on the menu at Gouda Girls.

Like Kenah, Drufke said that she found the workers of Gouda Girls to be very friendly, down to earth and that they cared about their customers.

“They were just like, ‘Oh, sure, darling. It’ll be right up for you, love,” Drufke said.

Drufke said that one doesn’t always get that kind of service at a fast food restaurant. She added the fact that a food truck is a small business, which makes it fun to support.

Drufke said that she would buy another meal from a food truck, and that she is open to trying a different food vendor.

“I think that they serve good food for a reasonable price that you can’t always get in the dining halls, which is definitely why I’ll go back again,” Kenah said in an email.