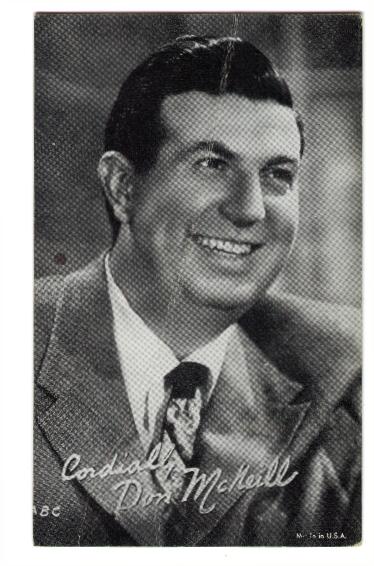 It’s April 9, 1953, and Marquette students gathered outside the train station, signs and placards in hand. The Marquette band waits in anticipation for the cue to begin playing its welcoming march, and that year’s prom queen stands with a bouquet of flowers in hand. A fleet of sparkling new Buicks, also lavishly decorated, lined up along the curb, waiting to whisk away Marquette’s guests of honor to Schroeder Hotel. And in huge letters, blanketed across the administrative building, a sign reads, “Welcome Home, Don McNeill.”

In an age when the wonders of film began to overshadow radio, Don McNeill, a 1929 Marquette graduate, set the standard with his hit variety show “The Breakfast Club.”  The Chicago Tribune once called McNeill, “The pioneer of talk shows.” And his radio show, beginning in 1933, certainly acted in many ways as the starting point for shows like “The Tonight Show” that followed in its footsteps. McNeill’s personality and charm was the glue that held together the show’s deft melding of comedy, music and guest appearances.

A one-time newspaper cartoonist, McNeill was always a radio man at heart. By the time McNeill graduated Marquette, in fact, before he had finished his junior year, he’d already solidified a job in radio at WISN. Over the years he’d rack up radio gigs at WTMJ, the Milwaukee Journal’s station, and WHAS in Louisville. After only five years of experience in radio, he was given the opportunity to go to Chicago and take up the emcee position on the flailing NBC morning show, “The Pepper Pot.” No one would have predicted that McNeill would not only save the show from failure, but turn it into the consummate success that was “The Breakfast Club.”

“The Pepper Pot” eventually gained enough traction and audience to allow McNeill to reorganize the show and change the name to “The Breakfast Club,” a nod to its early morning air time of 8 a.m. and to the fact that many listeners would eat breakfast while listening to the show.

That type of intimacy was something the show was known for throughout its tenure. Every show had a live audience. McNeill would make a point to walk through the stands during the show to ask questions and have audience members tell their stories.

McNeill’s guests also highlighted his varied and energetic approach to the show. On one show he spoke to Julie Andrews about her role as Mary Poppins. On another he hosted a Korean orphan children’s choir, and yet another, the secretary of the late president Kennedy. Over the years he welcomed doctors, reverends, political and government employees, celebrities and other notable people of the time. Never one to shy away from topical and popular happenings, either in his guests or his jokes, McNeill continued to appeal to a wide audience year after year.

So it’s no wonder that in 1953, Marquette, his alma mater and the place he first got his start in radio, welcomed McNeill home like a hero. His radio show was still going strong after 20 years, and to celebrate that and Marquette’s newly built student union, McNeill came “home” to broadcast an episode of “The Breakfast Club” directly from the union ballroom.

The event was a hit. The entire country listened to the broadcast, and McNeill was his charming self, talking with old friends and introducing his troupe to the Milwaukee audience. McNeill also called attention to the progress he saw across Marquette’s campus, highlighting the creation of the new Memorial Union. Then-president of the university, the Rev. Edward J. O’Donnell presented McNeill with an award of merit.

By the time McNeill’s show ended in 1968, he had been on the air for 35 and a half years, longer than any other emcee of a network entertainment program. Despite the unscripted, ad-lib nature of his show and the unchanged format throughout the years, “The Breakfast Club’s” numbers and popularity rarely faltered. The only major fault in all its years was an unsuccessful transition to television in the 1950s, a failure that perhaps speaks to the uniqueness of radio and the power of the devotion of the show’s audience to the original format.

Although the passing years have changed the way we look at radio, the influence of McNeill and his show in the media industry is undeniable. When it was announced “The Breakfast Club” was ending, news outlets from Chicago and Milwaukee all the way to Dallas, Omaha, Sacramento and everywhere in between reported of the sad news, lamenting the “end of an era.”