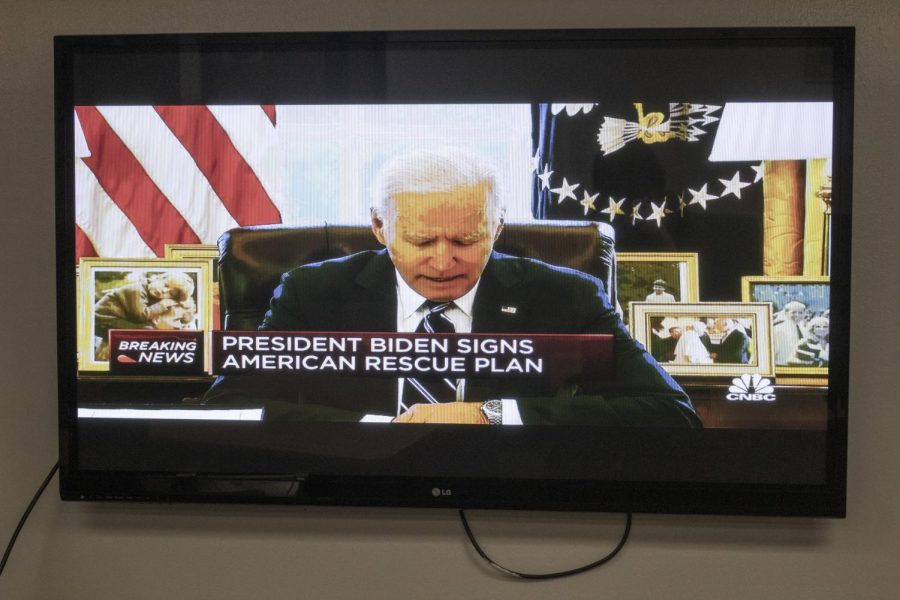 A new stimulus bill was recently passed in the Senate to help Americans navigate the COVID-19 pandemic. It is a $1.9 trillion plan designed to help stimulate the economy

This bill is also known as the America Rescue Plan, and according to the Washington Post it is aimed to help in a few major areas. These include unemployment benefits, child tax credits, aid to state and local governments, pandemic responses, housing assistance, school support, aid for multi-employer pension plans, new provisions and stimulus checks.

The America Rescue Plan was authorized on a 220-211 vote. The vote was split along party lines aside from one Democratic representative, Jared Golden, voting no.

Rob Miller, a sophomore in the College of Arts & Sciences and president of Marquette Democrats said that he is disappointed that the Senate could not find bipartisanship when it came to stimulating the economy and helping Americans get through these difficult times.

“It’s kind of shameful that the vote was party lined and the House passed it at 220-211 with only one Democrat voting against it. I hope that in the future we see bipartisanship with passing through legislation such as the economic relief bill that the president signed into practice,” Miller said.

Paul Nolette, an associate professor and chair of political science, said that this package includes a number of things that benefit individuals affected by the pandemic. One of the most well-known pieces of the bill is the stimulus checks that will go out to most Americans. He said that the idea is that these checks are supposed to help stimulate the economy.

Nolette also said that the bill provides things like child tax credits that are aimed at reducing childhood poverty, which is something that has increased during these difficult economic times. It will also go towards money for state and local governments, which is $350 billion.

“It is a very large amount of money for state governments, cities, municipals, etc … but it is meant to keep these operations afloat so they do not have to let anybody go” Nolette said.

A lot of money also went toward COVID-19 responses, Nolette said. It went to funding COVID-19 testing, contact tracing and helping states and localities get vaccines into people’s arms as quickly as possible.

“$1.9 trillion is a huge amount of money, but you need something huge to address something as disruptive as this pandemic,” Nolette said.

Nancy Flaherty, a first-year in the College of Communication, said that when President Joe Biden entered his presidency he inherited a nation ruined by an economic crisis and a pandemic that continued throughout the country. The premise of his campaign was convincing voters that he would be the best choice to handle the COVID-19 health crisis.

“That’s why it was introduced (the stimulus bill), as a comprehensive and multi-faced bill that answers to the nation’s needs in the ongoing catastrophe of the pandemic. It was passed because the Democrats hold a majority in the House and Senate. Both the House and Senate voted along party lines” Flaherty said in an email.

Nolette said that the American Rescue Plan is an appropriate response to a major nationwide problem. He said that this problem has resulted in lots of health consequences, as over half a million people have died as a result of this pandemic, but it has also had a huge impact on day-to-day life.

“(The pandemic has had a) big impact on everyday life. On the economy, jobs have shifted virtually, schools have shifted virtually. Thinking about instruction at Marquette, we haven’t had a normal semester in quite some time” Nolette said, “We are wearing masks, socially distancing in the classroom and on campus, we have shifted online. It has been really disruptive, so the federal government needed to act here on this act of crisis with this legislation and they did that here.”