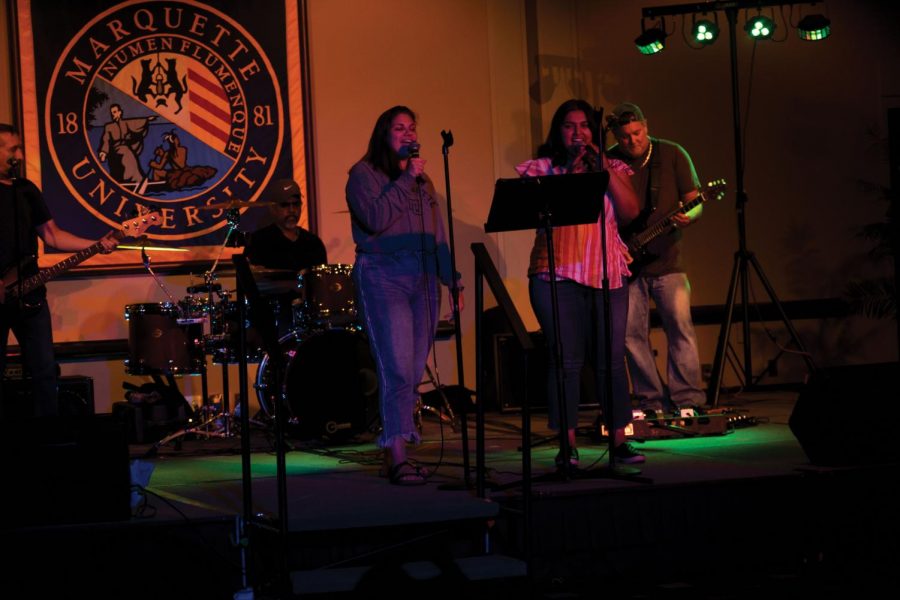 Students sing a duet onstage accompanied by a live band.

The lights were low as a group of Marquette students bustled into the Alumni Memorial Union ballrooms, cheering, whooping and dancing up to the stage. Two students belted out “Don’t Stop Believing” by Journey. The band was played behind them, the whole room filled with footloose energy.

This year, Mania Weekend consisted of a Taste of Milwaukee event Thursday that took place in the Ray and Kay Eckstein Common in front of Schroeder and had food places such as Ian’s Pizza stationed for students to grab food. There was also a comedy show Friday and live band karaoke Saturday.

Hicks got the idea to bring live band karaoke to Marquette when she attended the National Association of Campus Activities conference in the spring. NACA is a large convention for campus programming. There she witnessed live band karaoke, a step up from traditional karaoke in which a live band plays music behind the singers, rather than speakers playing a pre-recorded track.

“Think karaoke, but full send,” Hicks said. “It’s a chance for you to get up and be up there with the band.”

Hicks said MUSG has tried to come up with new programs, and this seemed like a fresh take on karaoke.

“I feel like people think of karaoke as a classic (event),” Hicks said. “We’re putting a twist on it with a live band, and I thought … it’s much more interesting.”

Along with live band karaoke, the event included a mac and cheese bar with different toppings. There were also different activities for those who weren’t into the singing scene, like board games.

MUSG has put on karaoke before but wanted to make it unique, Hicks said.

“We try to offer something for students, end the long week of school and bring the things (students) want to do in the city here,” Hicks said.

“Karaoke is always something really fun and really laid back,” Manjee said. “It’s also a different activity that you don’t tend to see a lot of other college activities put out.”

Both said they were intrigued by the idea of live band karaoke. Hudson said she was excited for the sometimes-awkward atmosphere that karaoke tends to bring but had a positive mentality and was excited to have a blast.

“The only thing that worries me is staying on tempo with the band,” Sniadach said.

“We wanted to take advantage of what campus offers,” Sniadach said. “(It’s an) opportunity to meet some people and have some fun.”

Hudson, a self-proclaimed bad singer, said she thought it was very endearing to watch people sing, whether or not they have any vocal ability.

Sniadach, on the other hand, grew up singing.

“My parents used to say my life was a musical,” Sniadach said.

Though neither had ever participated in karaoke, both had songs in mind when they got onstage.

Hudson said she would revert to her childhood, aiming for songs from “Hannah Montana” or “High School Musical.”

The setlist had a wide range of music, spanning from Blues Brothers to Taylor Swift.