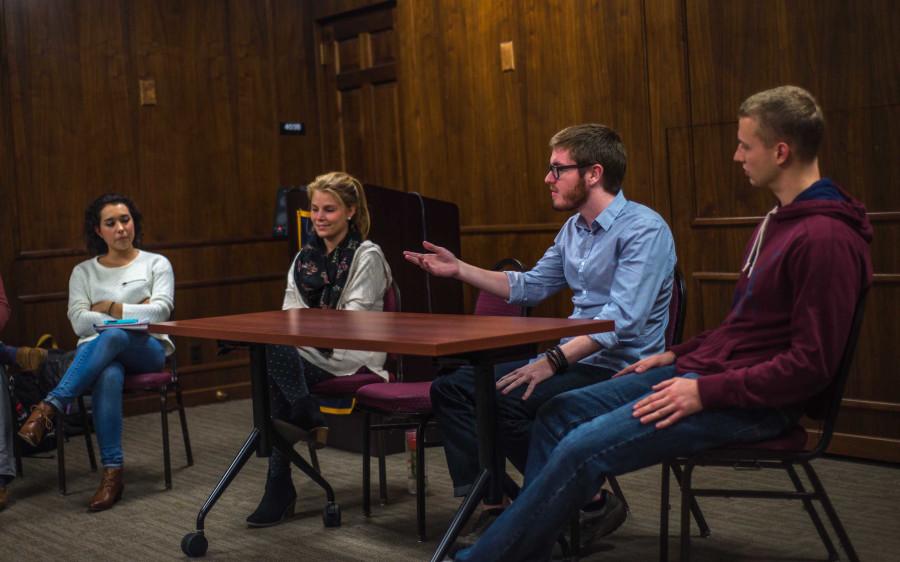 Studying abroad can be a transformative experience, but what changes when you come back?

I compare studying abroad in Madrid to being in a Pablo Picasso painting. His art outlines a clear subject, but the details of the painting are open for interpretation. Like his art, my experience was waiting for me to fill in the details.

When I returned to the U.S., I felt like I was in a Salvador Dali painting that melts realities into dreams. I felt like I was living in two worlds. I desperately tried to recreate my life in Madrid while feeling forced to succumb to the American lifestyle I left behind.

I moderated a panel Oct. 27 to ask eight students about their experiences with reverse culture shock after studying abroad in Australia, Asia, South America and Europe in the past year. When I asked them what they missed the most, they mutually agreed: the people.

Noah Simpson, a junior in the College of Communication, said the communities defined his experience in the Philippines.

“Any Eastern culture is going to have a totally different mentality regarding community,” he said. “It’s just crazy, especially as an American, because we’re highly individualistic.”

“People aren’t asking me how my day is anymore,” he said.

Where is the community for returning students at Marquette? Where can they go to remember their experiences with people who understand the formation of a new perspective and its divide with their former life?

Jessica Lothman, a study abroad coordinator at Marquette’s Office of International Education, acknowledges studying abroad as a process, not an experience. She said sometimes students don’t anticipate experiencing another type of culture shock when they return.

“I don’t think students expect the reentry shock,” Lothman said. “They don’t recognize that it is going to be different.”

The OIE offers a range of resources for returning students. These include a mixer, a two-credit class and an invitation to make appointments with one of the three study abroad coordinators to reflect on their experiences.

None of the resources are required, but students have expressed a need for a mandatory meeting or event to help them with the return process.

“I definitely think there is a disconnect between services that are available and students reaching out to use those services,” said Lothman, who specializes in programs for Spanish and English-speaking countries.

Nuri Navarro, a senior in the College of Communication, said she felt out of place at Marquette when she returned from Chile.

“The (OIE) gives you so many meetings before you leave,” she said. “They talk to you a lot but then when you come back, you’re just completely alone.”

“I think that’s maybe something we need more feedback from the returnees (for),” said Karli Webster, associate director and manager of study abroad, in regard to how the OIE can improve its reentry programming.

Lothman said the office communicates with students passively and actively, but Webster added that the extent of a student’s involvement could make a difference on their return.

“It really depends on the student and how much they want to interact with our office after they get back,” Webster said.

The office has initiated two passive ways of communication: a new email series that prepares students  for reverse culture shock while abroad and a website addition that defines reverse culture shock and the resources that are available, specifically for returnees who want to stay involved in an international setting.

In contrast, the office started a pilot program that hires student ambassadors for seven programs. Each ambassador helps those who are preparing to go abroad for their prospective program. In addition, the student ambassadors volunteer at the open house and larger events.

Nick Favreto, a graduate student at the University of Oslo in Norway, said the earliest study on reverse culture shock was done in the 1950s. He is interviewing 20 students and eight faculty members from Marquette and the University of Wisconsin­-Green Bay to research more about this phenomenon.

After he studied abroad in Denmark, he interned in the OIE at his alma mater UW-GB, and then at Marquette.

He said the OIE at Marquette is understaffed and has limited funding as a private institution. These factors make it difficult to provide students with everything they need before and after they go abroad, especially if they don’t work in the office.

“I feel fortunate that I was able to have access to resources, but I felt like it was just a convenience factor,” Favreto said. “That’s why I’m doing this study.”

His interviews revealed that students who worked in the OIE had a positive reentry process. “Now they’re in this international atmosphere and the staff has helped them to think about future career endeavors,” Favreto said.

Anya Toledo, a senior in the College of Arts & Sciences, has been a global student assistant in the OIE since her semester abroad in Germany, spring 2015. She said working in the office helped her through her reverse culture shock.

“I think working at the office has helped because I’m continually in that environment of people who share the same interests and passions,” Toledo said. “You feel much more comfortable talking about what happened without feeling like you’re bragging or annoying people.”

Toledo is in the process of applying for graduate schools abroad with advice from her bosses and mentors in the office.

“They have been so helpful in terms of getting me information that I need and offering to read personal statements,” she said.

The OIE collaborates with the Career Services Center. They co-sponsor a website called “Going Global” that provides information about working abroad post-graduation.

“We collaborate a lot with Career Services because . . . a big part of the back-end piece for reentry is how this experience integrates into your résumé and your professional profile,” Lothman said.

Monika Cinch, a junior in the College of Business Administration, said she talks about what she brought back from studying abroad in Cordoba, Spain, in interviews often.

“I learned the most about work/life balance and how you really need to treat yourself like a human, not just a student,” Cinch said.

The University of Michigan has an international center that identifies opportunities for students to work, study and travel abroad outside of the school or a specific college. Favreto commended the UM for its study abroad programs.

“We’re in a unique position on campus,” said Audrey Buswell, the education abroad coordinator at UM.

The center has a summer internship program that is available for students who have or have not studied abroad.

Buswell said the most popular reentry program at UM is the International Career Pathways. It is a series of about 40 events in collaboration with study abroad offices from different colleges across campus.

“It receives really high attendance rates,” Buswell said. “We get people who are interested in going abroad and people who have returned and want to decompress.”

With a student population of more than 40,000, the university has about 1,500 students attend at least one event as part of the series.

The series includes several panels that talk about topics such as global health and international internships. Going Beyond Awesome is one of the many programs Buswell said was specific to reentry. She explained that it aims to encourage students to reflect on their study abroad experiences and talk about it with their peers in more than just one word.

In appointments, Lothman engages with students in a similar way to the reentry panel at UM.

“I can help students identify what they actually liked about that experience,” she said. “I think there are ways to connect that to . . . the rest of their Marquette experience, or integrate that into their major.”

These reflections can seem useless when family and friends can’t relate to a student’s time abroad. “People did not understand that while I was done, while I was back from being in France, I was still experiencing study abroad,” said Rose Zetzman, a junior in the College of Arts & Sciences. “They just want one word.”

Cody Bauer, a senior in the College of Arts & Sciences, said he had the worst Thanksgiving when he returned from his time abroad in Australia on the Monday before the holiday.

“All my family members when I talked about Australia… looked so disinterested,” he said. “The people who want to listen are the people who studied abroad because they can relate to how that experience changed you.”

Navarro said the panel was beneficial for her and helped her understand that what she was feeling was normal.

“It’s definitely something that the study abroad office should implement,” she said, referring to the panel. “If you don’t have that support system coming back, it’s hard.”

The eight students at the panel came together as strangers and found a common ground. They bounced off each other’s ideas and shared their experiences, feelings and insights to create a community.

The same element that they agreed they missed the most – the people – can be the outlet to keep their experiences and new cultural identity alive.

“I think, personally, if reentry isn’t given the limelight that it deserves, that students are going to not get the full potential of the international experience that they have,” Favreto said. “(The solution) is creating the outlets for them to be able to keep it growing.”