Faith is what keeps me here

A somewhat unconventional theology professor and priest, the Rev. Bryan
Massingale explores why his is called to
Marquette—and to the Catholic Church. 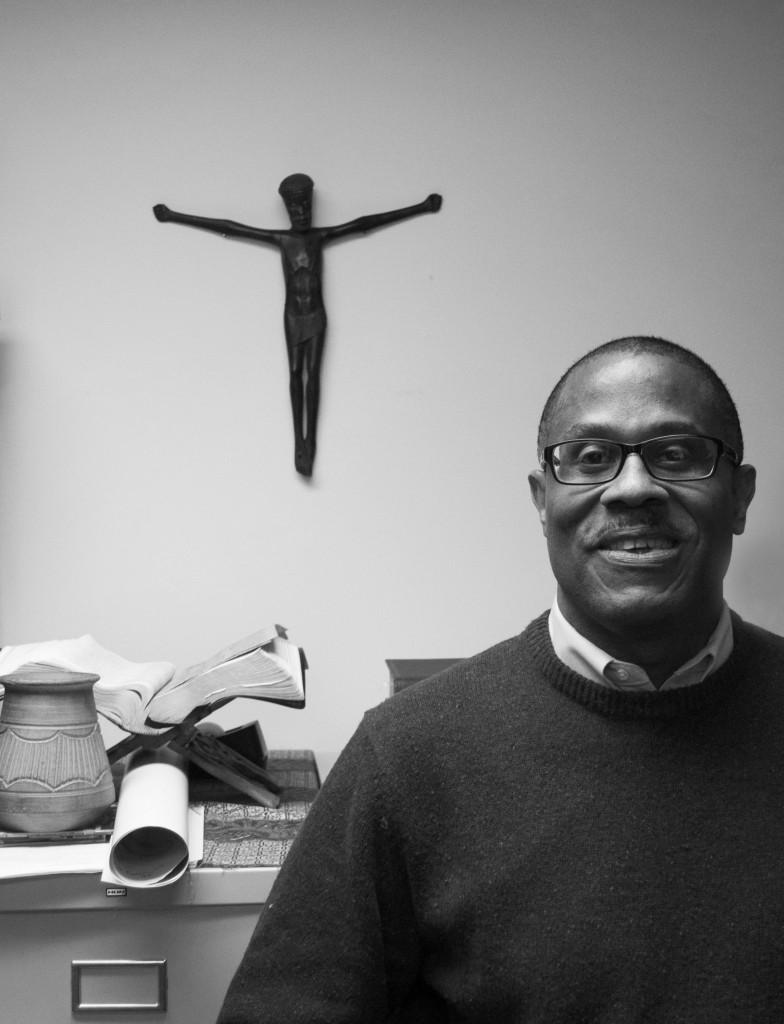 In Bryan Massingale’s office, there is one picture hanging on the wall. It’s printed in black and white, outlined by a blue frame. The picture hangs lonely in an office that is not short of character. If you don’t take time to look around, you’d probably miss it. It’s the only picture Massingale hung up. When you ask him about it, he does his best to act surprised.

He is more likely to respond with a question himself. “Why do you ask?” or “Why are you wondering?” as to protect himself from a response that’s lacking in depth or dimension. He is always protecting himself from those answers — the ones that just make you shrug your shoulders, the ones that empty the questioner of any real
satisfaction. His responses are always thoughtful. His answers are always sufficient.

He looks at the picture as if he is meeting it for the first time, like it wasn’t there yesterday. He has no idea why it’s the only thing hanging.

Massingale points to the wall opposite the picture—to a wooden cross hanging from a nail—as if to point out that the lone picture is not the only thing on his wall. But the wooden cross is a generic decoration in
these parts.

He leans back in his chair and studies the photo. He has moments in his thought process where his entire face squints with focus. He wants to respond but knows there are few words that can describe what that photo means to him.

That photo is his life. That photo is the day he dedicated his life to something bigger than himself. Photos that are worth 1,000 words would do anything to be worth as much as this one. Massingale continues his stalking glare of what lies in the frame. He has no answer.

And finally he arrives at a justification for the photo.

“Obviously,” Massingale starts, “because faith is pretty important to me.”

He stops and continues to stare. His answer didn’t satisfy himself. That was apparent. It was as if for the first time in his life he was stumped. He doesn’t get stumped. He’s read enough books to know the answer to every question the universe could throw at him. Here he was though, lost in a moment he couldn’t explain.

He looks back at the photo.

Today, he is a priest, a professor and an activist. If he was in the E-Street band, he would be Bruce Springsteen—always out in front, challenging the way everyone understands his craft. Around Massingale, the status quo is never safe.

He was a junior at Marquette when he first started thinking about becoming a priest. He admits to being as surprised as anyone. He kept it a secret as long as he could. He didn’t tell his friends or his relatives. He didn’t tell his parents. He had excelled at Marquette, among some of his class’s brightest students. His academic record had earned him a fellowship from the university that would pay for four years of any type of graduate school.

“I wanted to serve and help people,” Massingale says. “People say you’re called by God,” he says in a matter-of-fact tone as to try and dismiss the stigma of the cliché. “But I felt that. I felt this was right.”

Massingale turned down the fellowship. It could not be applied to the seminary. That’s where Massingale was headed.

He never told his parents he was offered the fellowship. His father, as Massingale remembers, wanted him to be a psychologist or a lawyer.

It wasn’t until the week of graduation that Massingale’s parents found out that he had turned down a fellowship, that he would never become a psychologist or a lawyer.

“He thought I was wasting my life,” Massingale says of his father. He sits back to think, elbows bent, hands folded and resting just in front of his chin. His father told him that almost 35 years ago. Massingale still doesn’t like to hear it played back in
his head.

“He would make comments sometimes when we would get together,” says Massingale, “that priests get lonely and sometimes or they tend to have drinking problems.”

But Massingale doesn’t hold it against his father. “He was doing what a lot of fathers would do,” he says.

Massingale attended St. Francis Seminary in Milwaukee and followed it with a moral theology degree in Washington D.C. He would study in Rome and eventually return to St. Francis to teach after three years as a parish priest.

“Teaching was very much a calling for me,” Massingale says. It was 1986 when Massingale began teaching. Three times at the St. Francis Seminary he taught a
course he created on gay rights and the Catholic Church.

One of the first funerals Massingale worked after becoming a priest was for a young man in his 20s. He had died of AIDS.

At the time, that meant he had immediately been thrown into one of two categories: gay or a drug user. It meant that if he spent any time in a hospital before he died, he did it without much human contact. The lack of understanding surrounding AIDS at the time only bred fear. For a while, it was thought the disease could be spread just by being in the same room as an AIDS carrier.

“I remember talking to those parents before the funeral and as we were setting up,” Massingale says. “And the parents wanted no mention of AIDS.”

The request was common during the ‘80s and into the ‘90s as Massingale continued to work funerals of young men who had died of AIDS. Massingale also spent time in hospitals, visiting with AIDS patients.

“Those experiences stuck with me on a gut level,” says Massingale. “What stuck with me is that this issue of AIDS wasn’t being taken care of because we didn’t feel free to talk about it.”

So he talked about it.

He talked about it in the classes he taught, in the Catholic archdiocese, in the local newspaper. He talked about it
with colleagues and students. He was
gaining followers and developing enemies. He disagreed with bishops in Wisconsin, who in 2006 supported a bill that would make gay marriage unconstitutional.

“I thought (the bill) opened up an opportunity for more discrimination,” Massingale says. “People, whoever they are, are
still human.”

Massingale’s stance appeared in a guest editorial he wrote for the Milwaukee
Journal Sentinel.

“I definitely think it made me suspect in some corners of the church,” says Massingale. “But it seemed like the right thing
to do.”

Gay rights have been a continuous battle for Massingale. It is still part of the curriculum today in his moral theology class. He is not always pleased with the way the Catholic Church has handled the topic. In those moments he has not been afraid to separate himself from the masses.

The only book collection that can rival Massingale’s books on gay rights is his collection on racial justice. It stretches down an entire row on his office shelf. In 2010, he published one of his two books titled “Racial Justice and the Catholic Church.”

Racial justice is another one of Massingale’s “hopefully transformative” missions. Yet this one he will often identify as
more personal.

So Massingale addresses them himself—in his literary works, as well as his classroom. In his moral theology course, he spends an entire class period letting students play Monopoly in small groups.

Massingale applies his own rules, however, where students are given certain amounts of money and property to start the game, based on a socioeconomic class they randomly choose.

“And then they play,” Massingale says.

The socioeconomic classes that are typically better off start with more money and property. Those less fortunate start with much less. And as the game rolls on, Massingale says the same outcomes take place each time. Those who start with less are not given a fair shake; they can’t overcome their socioeconomic distinction.

And the same thing happens in life.

“So now, students who may have never experienced these obstacles in life can see they are very real,” says Massingale.

Every course Massingale teaches is done with the same learning objective, an objective called the “hope for transformation.” His goal is to teach in a way that students are inspired to examine their faith. He also aims to describe the relationship between religious faith and the struggle for justice.

His classes also operate under an “academic Miranda warning,” in which students are warned that during the semester, their beliefs on church, faith and God will be challenged. It also assures them that no matter whether they change or stay the same, they are always entitled to and will always receive personal respect.

In 2009, Marquette awarded him the highest honor for teaching excellence.

“I love teaching as part of my job,” says Massingale. “I am not here to tell students what to think, but rather encourage them to think.”

The way in which Massingale frames all his points makes too much sense. He is innocently rational and independent. He is highly critical of the Catholic Church. He even appears fed up at points.

But the picture of his ordainment hangs on his wall. The photo is a lonely reminder that he has made the ultimate sacrifice for the Catholic Church. He has devoted his life to an institution with which at times he appears to so deeply disagree. An institution whose history makes him “angry.” An institution that has questioned his beliefs and framed some of his most important stances to be dissenting opinions.

He is highly critical of the Catholic Church’s current leadership figures, who he says are not being honest with themselves regarding the current crisis the church faces.

“It is a demographic collapse that the church is facing,” Massingale says. “People today want to know why go to church, and the issue is that the Catholic Church can’t answer them.”

There is a sense that Massingale’s battles present greater obstacles than David had against Goliath. He is going head to head with an institution steeped in political and cultural dominance—with a history of not backing down.

But Massingale’s struggle is so different. Different in that he battles the very institution to which he has devoted his life. The institution he is supposed to value over everything else. The one to which he voluntarily chose to belong.

And so he admits that he gets the question a lot.

Why are you a priest?

He has gotten it from friends and family, students and journalists. They wonder, because the reality is that he doesn’t have to take on any of these battles.

And to answer the question, he goes back to that same mysterious intangible word that he uses to justify the photo hanging on his office wall.

He gets up from his chair to grab one of his books.

“I’m sorry but this is just important that I get this right,” Massingale says. “This quote will answer this question of why I am doing this.”

He grabs a book, which has a copy of Dr. Martin Luther King Jr.’s “Letter from Birmingham Jail.”

Massingale scans the page with his index finger, following the lines of text.

“Ahh, here we go,” Massingale says. “There can be no deep disappointment where there is not deep love.”

He looks up from the page, satisfied with his answer. With both his hands he closes the book and looks up. He breaks the silence that follows with a final justification.