No. 19 Marquette kicks off Big East season with clean sweep over DePaul 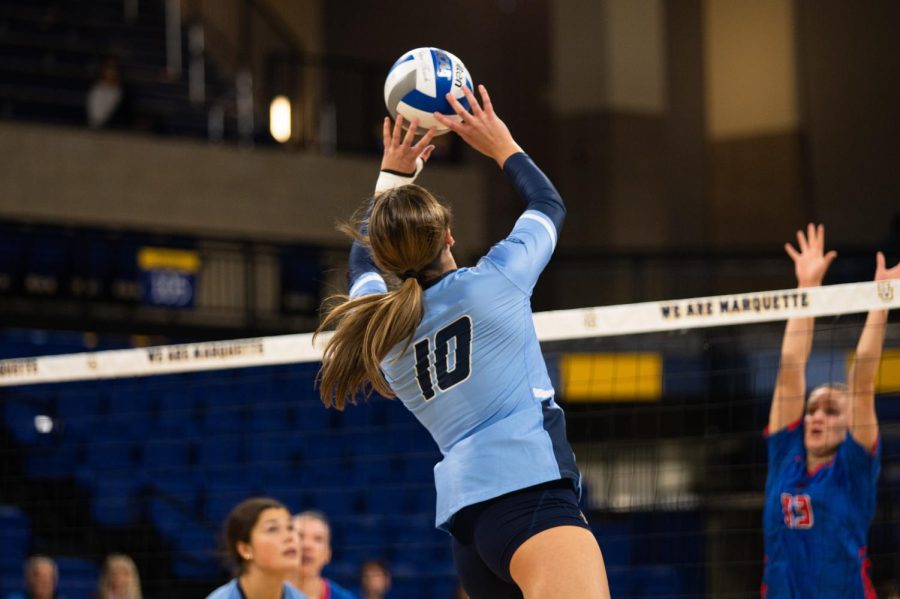 After getting off to its best start in a season since 2009 with a 9-1 non-conference record, No. 19 Marquette began Big East play Wednesday night at the Al McGuire Center against I-94 rival DePaul in search of its eight straight victory.

With the win, Marquette ties a program best 10-1 start to a season since joining NCAA Division I in 1986.

“I thought we were efficient tonight, nice job offensively, first and second touches, they put a lot of service pressure on Jenna (Reitsma) and she handled it really well and Yadi (Yadhira Anchante) put people in good positions and that allows you to hit at a good clip,” Marquette head coach Ryan Theis said.

After a competitive start to set one, Marquette built some breathing room as it took a 17-13 lead late in the frame forcing DePaul to call a timeout. Coming out of the timeout, the Golden Eagles continued their momentum putting together a 8-2 run to take set one 25-10.

Marquette looked to have been in control in the second frame, maintaining a six-point lead for majority of the set. However, DePaul wouldn’t go down easy as it attempted to mount a comeback cutting the deficit to 21-19 forcing Theis to call a timeout

The timeout swung momentum in the Golden Eagles favor as they ended the set on a 4-1 run to take set two 25-20.

“The key was getting stops,” Theis said. “In the second they killed 13 on us and so we just weren’t getting stops. I thought our assistant Ryan Walthall made a great comment which (was) our defense is acting like it should be easy and so in between (sets) two and three we just said it’s not going to be easy, get on the floor, get after the ball, let’s let some of these kills that are falling right now stop.”

And Marquette did just that.

After falling in a 6-4 deficit, the Golden Eagles outscored the Blue Demons 21-9 to take the match. In the third set alone, Marquette recorded 19 digs and held DePaul to just nine kills.

“We stop letting the ball hit the floor, and so we applied service pressure, defense got a little easier and then we were able to score in transition,” Theis said.

“I was just trying to work around the block and try to find the open floor, if I had to go off hands I would but I saw the seams and it worked,” Bray said.

Marquette (10-1, 1-0) will go for nine straight Saturday when it hosts Butler at 6 p.m. CST at the Al McGuire Center.

“We just have to keep focused and go into practice every day ready to perform and come back out again and do it again, three up, three down,” Bray said.

This story was written by Jackson Gross. He can be reached at [email protected] or on Twitter @JacksonGrossMU.