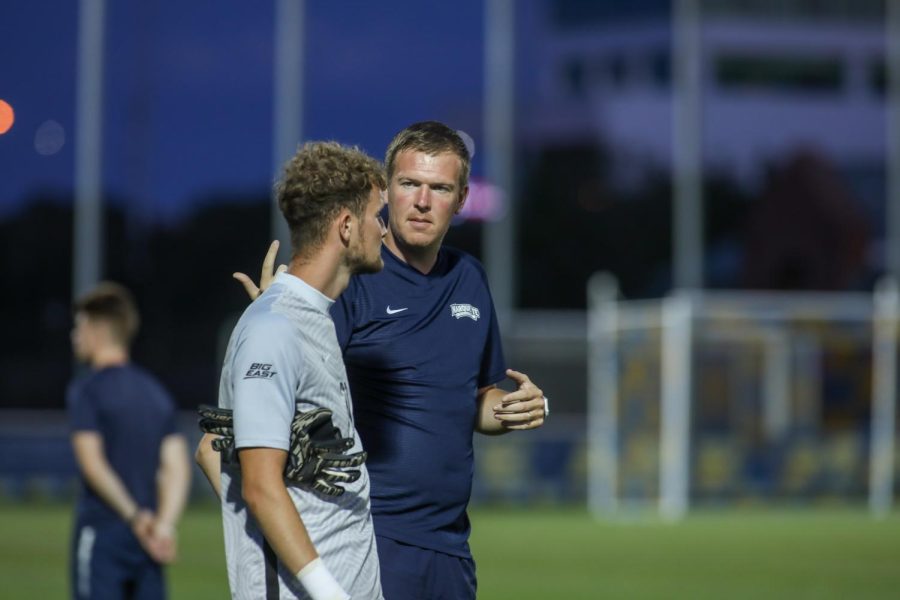 Cricket has been the national sport of the UK since the 17th century, but it falls to second place in popularity among the English. Football, also known as soccer, takes the trophy for England’s most popular sport, from playing to watching.

“For anyone in England, soccer is the only sport you really play as a young person,” Marquette men’s soccer volunteer assistant and goalkeeper coach Graham Shaw said.

Shaw, a Liverpool, England native, enjoyed a successful soccer career of his own while growing up.

“At the age of maybe six or seven, I went in goal one time and since then throughout my playing career, that was the position that I only ever played,” Shaw said.

Before Shaw traded in his own cleats for coaching, he represented Tranmere Rovers F.C. Academy and Liverpool School Boys.

“Once my playing career had finished it was always a passion that I wanted to stay around the game as long as possible and obviously coming to the U.S. it probably prolonged my coaching career, which is a good thing,” Shaw said. “It’s probably something that I’ll do for the rest of my life.”

Shaw has been a member of the men’s soccer program for five seasons, where he shares his own knowledge with his goalkeeper group.

Senior goalkeeper Chandler Hallwood is just one Marquette player who has benefitted from the extensive knowledge of Shaw.

“Graham pushes me to command my area and be that dominant force at the back. Be loud, be vocal and do what I do at the back. In the last two years with Graham I’ve been able to see that I got much better at things like that,” Hallwood said.

During the 2020-2021 season, Shaw’s keepers simply refused to concede as the Golden Eagles went on to win the Big East Midwest Division Title. Hallwood concluded the season setting single-season records for Marquette with the fewest goals allowed (8) and goals against average (.65).

“Graham has taught me the importance of being a good influence for the rest of the team,” Hallwood said. “Being the oldest guy on the team, it’s important to have that leadership.”

But the position of goalkeeper is not just one lone soldier in the net, but an army of supporters.

Beyond the perimeters of Valley Fields, Shaw is also a goalkeeper coach for FC Wisconsin.

“The timing was very fortunate to have Graham come work for us,” co-director of FC Wisconsin coaching Ben Shepherd said. “I am good friends with Louis Bennett and he spoke highly of Graham. It was just a really good fit for everybody.”

The club program vision of FC Wisconsin is to represent the best players throughout Wisconsin, with an emphasis on technical ability, long-term player development, and success. FC Wisconsin was founded in 2013 as “the re-structured and re-focused successor to FC Milwaukee Nationals,” with new philosophy, structure, and vision.

“We’ve had quite a number of players that have gone off and played for Marquette coming from our club. FC Wisconsin and Marquette have a good relationship anyway, so it makes sense to have one of their staff on our coaching staff,” Shepherd said.

For Shaw, there is a notable difference between club play and collegiate.

“For the goalkeepers at the club, it’s a lot more technical coaching because the younger ages especially need it. In the early teens, it’s really about focusing on the development of the players and their technical side,” Shaw said. “Obviously the older they get up into market, a lot more of it is tactical.”

But no matter the age or level that Shaw is working with, he said he aims to develop a personal relationship with each and every pupil.

“To me, coaching is about getting to know each individual. Some goalkeepers may need an arm around the shoulder and a word of encouragement, but other goalkeepers may need a screamer and yeller at times,” Shaw said. “It’s about forming those relationships as quickly as I can with the players, so I know what the player needs. Each player needs a different me at different times.”

Beyond the expertise and knowledge that Shaw brings to the field, it is his personality that makes him stand out.

“His personality is funny, being from Liverpool, they’re always funny people from up that end. Everyone on the team likes him. Everyone likes having him around. Everyone goes to him for advice too,” Hallwood said. “Whenever I need him, he’s always there, he’s always got his door open and always answer his calls, texts whenever you need him.”

Not to mention, the coach knows how to finish a team meal.

“We go on road trips and my word, he can eat! All I can say is Marquette men’s soccer must have a great budget for food because he can eat,” Shepherd said.

All Shaw had to say in response was, “He’s not wrong. I judge a restaurant on if their chicken parmesan is good. If it’s good, then I’m happy.”

This article was written by Ava Mares. She can be reached at [email protected] or on Twitter @avamaresMU.