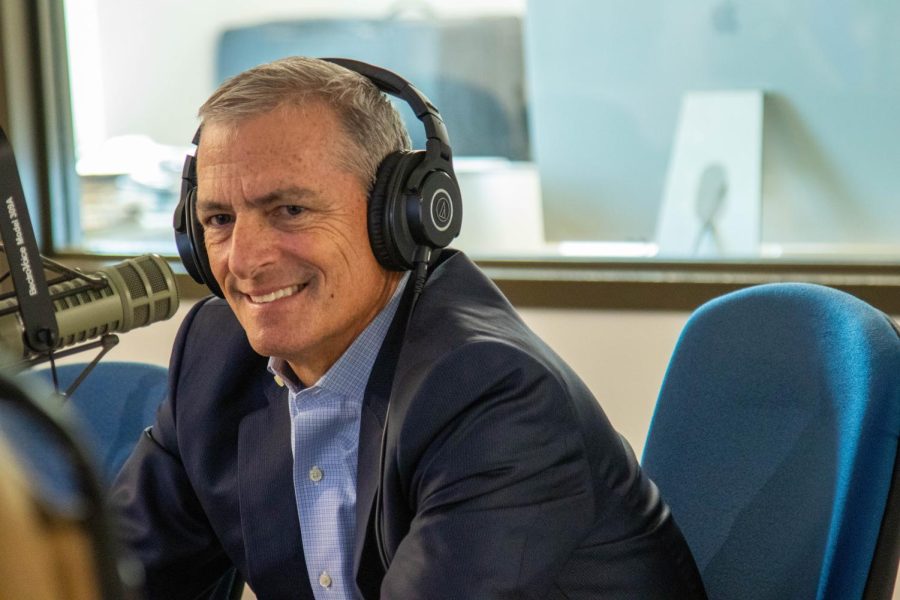 President Lovell is interviewed in the Marquette Radio studio.

Former President of the United States Barack Obama has a yearly tradition where he shares a list of songs and books he’s listened to or read during the summer since 2015. It’s a way for him to not only share his interests with people, but to connect with his followers and to bring them together.

Inspired by Obama’s summer time tradition, Marquette University Radio interviewed University President Michael Lovell to showcase his favorite songs of the summer. His playlist includes songs from The Killers, Imagine Dragons, The 1975 and The Strokes.

“You can probably tell from my playlist, I’m a big fan of alternative music,” Lovell said. “In the 1980s, I was very much inspired by groups like The Smiths and New Order. I’ve continued over time to follow the alternative music scene.”

Lovell said his favorite era of music is the 1980s, which brings back old memories from when he was younger whenever he listens to them.

“When I hear that music, it takes me back to when I was a teenager and maybe I was struggling with things and it helps me think through. There’s a song called ‘Life In A Northern Town,’ it’s a little bit of a sad song but it reminds me of what it was like to grow up,” Lovell said.

Lovell also recommended an audio book that he listened to over the summer, “Why” by Simon Sinek.

“I’ve read some of his books before. He speaks with great leaders that have a real optimism to them. Often times when I read, I read about leadership, or something about how I can be a better leader myself,” Lovell said.

Lovell also said he enjoyed the book, “Man’s Search for Meaning” by Victor Frankl, which was recommended to him by a student.

“For me, it was a very powerful book. The student, he knew what I was going through. One of the things that you find meaning in life is through suffering. With the health challenges I had, he was very thoughtful, the student,” Lovell said.

His health challenges refers to his battle with sarcoma, which he announced he was diagnosed with it during August of 2021. Despite his health complications, Lovell still used music to help him venture through his journey with this form of cancer.

“When I’m down the most, I think New Order is probably my go-to group. I saw them when I was a sophomore in college. It kind of takes me back. I find it to be inspiring,” Lovell said.

To see President Lovell’s full playlist of his favorite songs from the summer, you can listen to it on Marquette Radio’s Spotify account, marquetteuniversityradio.

This story was written by Rashad Alexander. He can be reached at [email protected]