Graduate students get ready to take next steps after Marquette 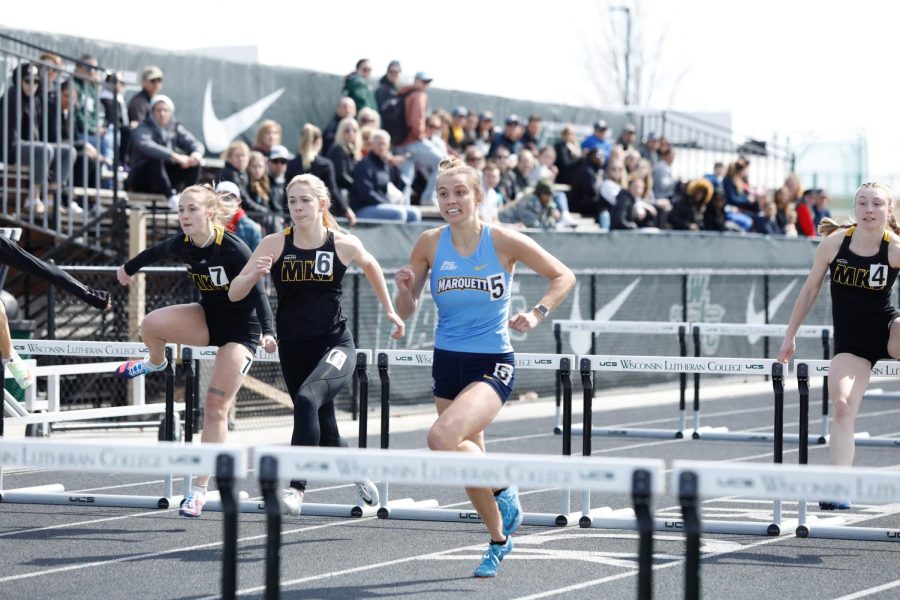 Upon graduation, college students far and wide have important decisions to make regarding their future. And for the graduate students on the Marquette track and field team, there is a month remaining of their eligibility before entering the working world.

“I’ve been a student-athlete basically my whole life. I’ve been doing sports and have been involved in lots of activities ever since I was super young,” graduate student multi-events Megan Wallace said. “It’s kind of a bittersweet moment to know that these are my last final days, final weeks of practices, bus rides, traveling with the team, and just competition in general,” Wallace said.

She said she is pleased with her decision to join the Golden Eagles after transferring from University of Wisconsin-Eau Claire this past year.

“The academics here at Marquette are great for the master’s program and is the reason why I transferred here,” Wallace said. “The grad program has a lot of great opportunities both on-campus and off-campus placements that will help set us up for success. They give us the best opportunity to get a job in the future.”

Head coach Bert Rogers said outside of his duties on the track, he does everything in his power to help his athletes in their professional careers.

“I write lots of letters of recommendation and those types of things or accept calls from potential employers,” Rogers said. “Occasionally, we’ll have individual conversations about what their future might look like or if they are having an existential crisis about what they want to do in the future.”

Bendel said with his time coming to an end, it has been a “love-hate relationship.”

“It’s hard to stop doing something I’ve been doing for so long,” Bendel said. “So, I am a little bit anxious. It’ll be like a sad but a good, goodbye. I am happy to be done but sad that it will be officially over.”

Wallace said by the time the season comes to an end, she wants to leave everything on the line.

“I intend on giving everything I have in these last few hours, days, and weeks with practices and competition,” Wallace said. “I will give everything I have while leaving it out on the track because we all know that we don’t want to leave without any other regrets in any shape or form.”

Bendel said he has been preparing for his future role in physical therapy by participating in clinical’s at Marquette.

“It’s like an internship and through the program, there is a 99% job offer rate,” Bendel said.

Rogers said only a handful of athletes compete professionally after graduation, as the level of competition at the professional level is hard.

While Wallace and Bendel are both at the tail end of their careers, both have different perspectives on their feelings of their career being nearly over.

“I will find ways to stay active, whether that’s still competing with track or finding a different activity, I will always be interested in the sport.” Wallace said.

As for Bendel, he said he shares similar feelings as he enters the next chapter of his life.

“Its sad to phase it out, however it is a good, goodbye from the sport,” Bendel said.

This article was written by Johnnie Brooker. He can be reached at johnnie.brooker@marquette.edu.