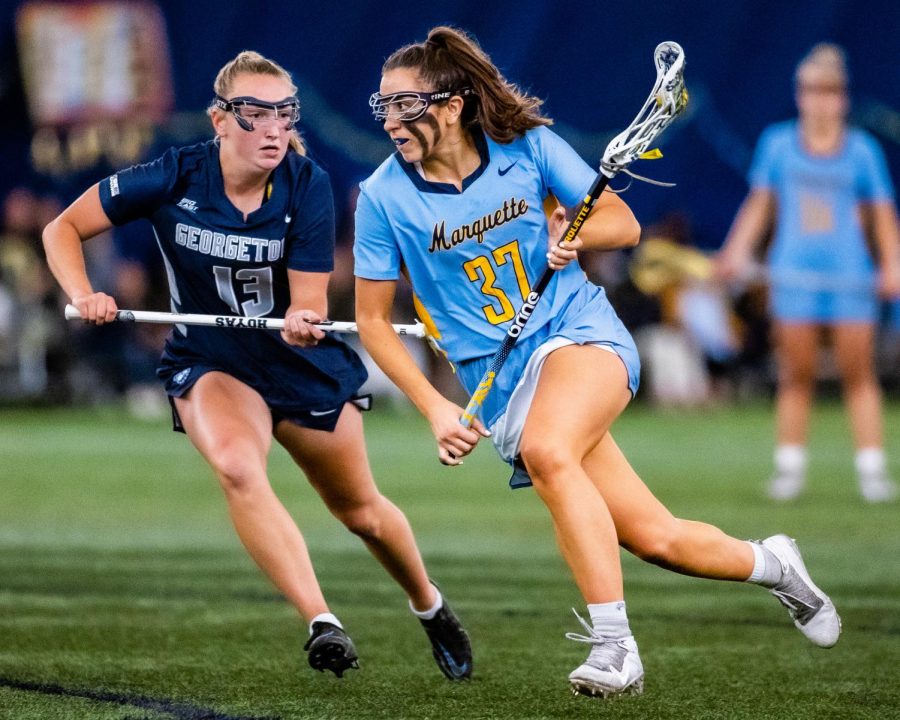 In its final home game of the regular season, the Marquette women’s lacrosse team hosted the Georgetown Hoyas at Valley Fields on Senior Day.

And in what was a tightly contested game, the Golden Eagles pulled out a 14-12 victory over the Hoyas to secure its first winning season in BIG EAST play since 2019.

“The team played so hard, they played together. All week we have been working on connection on our defense especially after letting up a bunch of goals against Butler and Notre Dame, we wanted to tighten up the ship a little bit with the defense and just start working together and we did,” Marquette head coach Meredith Black said.

It was a low scoring affair in the first quarter as both sides combining for just five goals. Of the five goals in the frame, Marquette found the back of the net four times, two of which came from graduate student attacker Kyra LaMotte.

The Hoyas were able to flip the script in the second quarter. After senior midfielder Lydia Foust scored her second of the day at the start of the quarter, Georgetown’s defense held Marquette scoreless for over 13 minutes.

Offensively, the Hoyas’ used a 5-0 run to take a 6-5 lead with 7:05 remaining in the frame. Both sides would then go scoreless for the next six minutes until Foust completed the hat trick to tie the game at 6-6 with 1:07 left in the half.

“I definitely think it was our shooting that wasn’t hitting, we were aiming right at the goalie, right at the goalies stick, so once we had a timeout we stepped back and we were like we need to go harder, move the ball faster and so going into the third quarter that’s when we were like we’re going to goal and we’re going to shoot to score,” LaMotte said.

Senior attacker Shea Garcia attempted to beat the buzzer on a 2-on-1 breakaway but a stick check from graduate student defender Nicole Massimino sent the shot wide and kept the game tied 6-6 heading into halftime.

The Hoyas began the frame with a goal from senior attacker Ali Diamond to take a 7-6 lead but Bireley would later tie it at 7-7 with her second goal of the game at the 6:57 mark.

Both sides would head into the final quarter tied at eight goals a piece.

After trading early goals in the fourth quarter, the Golden Eagles went on a 4-0 run to take a 13-9 lead with 6:27 left in regulation.

The Hoyas continued to chip away, scoring three straight goals in a span of a minute and 10 seconds to bring the deficit to 13-12.

Georgetown’s comeback would stop there as Soccodato scored with 1:45 remaining to secure the win.

Rumsey finished with 10 saves on 22 shots while allowing 12 goals.

“Mandy (Rumsey) did great, Mandy was fired up and had good energy and we had a good talk this week,” Black said. “She’s feeling good and she needs to build that momentum heading into the BIG EAST tournament.”

With the win, the Golden Eagles finished the season with a 6-1 record in home games at Valley Fields.

Marquette (8-8, 3-1 BIG EAST) will now travel to Colorado to round out the season against Denver next Saturday at 2 p.m. CST where there is a potential chance of a BIG EAST Regular Season title for the Golden Eagles.

“We got to drink a lot of water. We’re really lucky to play Denver last because now we stay out there for the BIG EAST tournament, so we’ll be there for a full week so hopefully that will help with our adjustment (to the altitude),” Black said. “That first game (against Denver) will be tough, it will be an adjustment for them and hopefully people handle it well.”

This story was written by Jackson Gross. He can be reached at jackson.gross@marquette.edu or on Twitter @JacksonGrossMU.