Class of 2022 recruit gives versatility and maturity to Golden Eagles 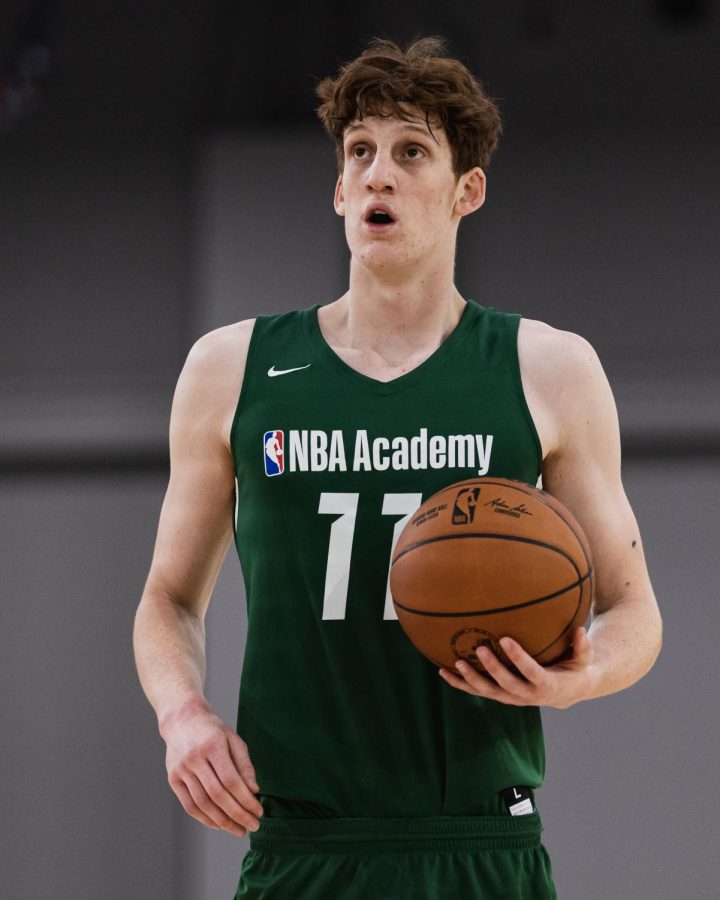 After losing three members of last year’s roster either to graduation or the transfer portal and potentially a fourth in Justin Lewis, Marquette men’s basketball head coach Shaka Smart picked up some gold in Class of 2022 forward Ben Gold.

Smart announced last Wednesday the Wellington, New Zealand native had signed his national letter of intent that day and will join the Golden Eagles late next month.

“I’m super excited about Ben Gold,” Smart said in a media availability last Wednesday. “There’s a lot of attributes that he has that I believe, once he gets his feet under him here, and that does take time for any freshman, but once he makes the transition, it’s really exciting what he can become as a player.”

Gold, who announced his commitment to Marquette in February, joins guards Sean Jones and Chase Ross in Smart’s first recruiting class at Marquette.

“I’m excited to announce my commitment to @MarquetteMBB. Thank you to everyone that’s helped me along the journey,” Gold said on his Twitter when he committed to Marquette Feb. 14.

Gold comes from a basketball family as his dad and two older brothers played the sport in New Zealand.

“As the youngest of three, he’s used to trying to compete with those guys but he’s kind of passed them up in terms of height and size,” Smart said. “The way his body’s changed in the last two, three years is amazing. You always try to get guys that are trending upward.”

Along with his level of maturity, the 6-foot-11 forward brings a level of toughness to Marquette’s roster.

“One thing I like about him (is) he’s got a rugby background,” Smart said. “Which to me is like football players in this country. They’re (rugby players) not going to be soft.”

Gold joins redshirt first-year forward Olivier-Maxence Prosper as members of the Golden Eagles roster who are products of the NBA Global Academy.

Currently, Gold plays for the NBA Global Academy in Canberra, Australia, while Prosper played for the NBA Academy Latin America.

“Those NBA academies have a lot of good players, so there’s a lot of talent on those teams,” Smart said.

Smart said he got to see Gold play in person back in December at the Tarkanian Classic and the G League Showcase in Las Vegas when he was playing with the NBA Latin American Team for that weekend.

“He was playing a little bit out of position (as) it was his first couple of weeks with that team and fortunately, we had watched a lot of tape on him so we knew what he was all about as a player,” Smart said. “(It) was just getting a chance to kind of see him in person. “We had already offered him a scholarship and he’s a high-character guy, who has a chance I think to become a terrific player.”

In a game against NBA Academy Africa in Las Vegas, Gold racked up 22 points and eight rebounds in 25 minutes at the showcase.

Along with playing in the NBA Global Academy, Gold has represented his home country on the national level several times. In late February, Gold played for Basketball New Zealand at the FIBA Basketball World Cup Qualifiers in Manila, Philippines.

With New Zealand’s senior national team, Gold played with a group of professional basketball players in their 30s.

“And one of the reasons they included him, he was by far the youngest guy that was included when he played a couple months ago with that group, is that they see a bright future in him and potentially long-term could be a significant piece on their national team. Maybe even in the Olympic Games or big, big international competitions.”

As for where Gold might play on the court next season, he lists himself as a small forward. Smart said like others who play the one through four on the team, Gold will be interchangeable in rotations.

“He’s gotten stronger so the way that the game has evolved, you want as many guys in the game to have versatility,” Smart said. “But I think you’ll see him playing kind of the four, but for us he’s multi-positional and (we’re) excited about moving him around some.”

As a big man, Gold is able to stretch the floor with plays inside the paint and beyond the arc poising some interesting options on how Smart might use him on the floor come November.

“One of the best things about him is he could really, really move for that size,” Smart said. “He’s what we call a clean mover and that’s so important in basketball. He’s got a lot of positive attributes and I think his best basketball, like a lot of these guys, is still ahead of him.”