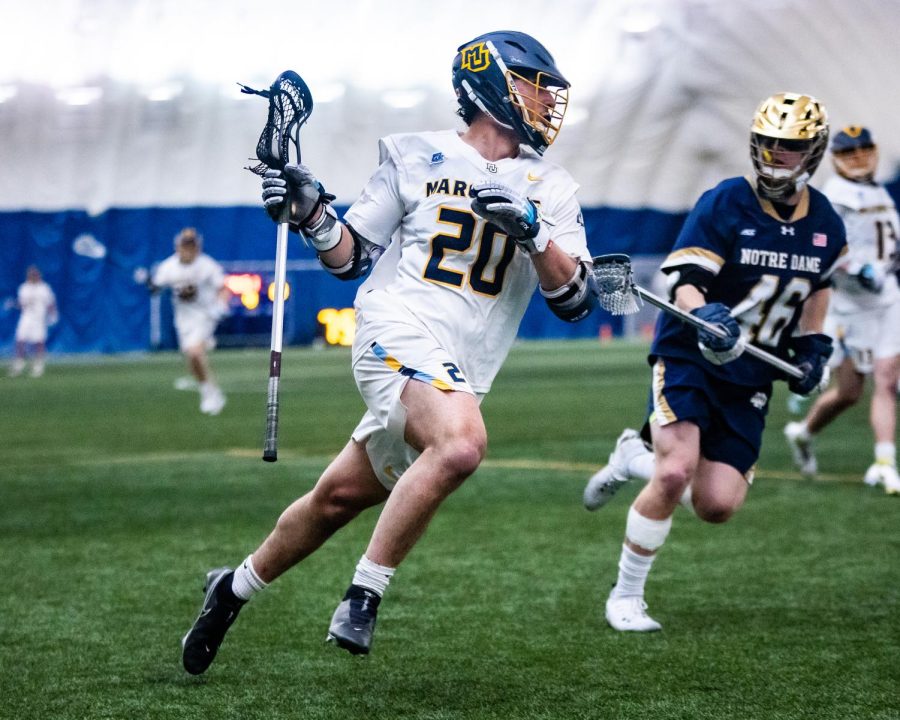 Just over a minute into the first frame, redshirt sophomore Devon Cowan put one past Notre Dame goalie Liam Entenmann to give Marquette an early lead. It was Cowan’s 12th goal of the season.

Cowan then saw his second goal of the game, but it was then followed by a series of goals by Notre Dame, that forced a Marquette timeout. Despite Marquette’s two man-up opportunities, the first quarter closed with the Golden Eagles down by four goals, 6-2.

The second quarter followed a similar pattern as the first, with Notre Dame controlling much of the game as the Fighting Irish outscored the Golden Eagles six to three in the second quarter alone.

Marquette’s three goals in the frame came from Cowan, sophomore attack Justine Mintzer, and first-year attack Bobby O’Grady. For Mintzer, it was his first goal of the season.

“Justin has been a guy that has been patiently waiting for his opportunity. Though some of the injuries that we’ve had, Justin had the opportunity now and it’s great to see home step-up and take advantage of that,” Stimmel said.

At the halftime break, Marquette trailed behind Notre Dame, 12-5.

The third quarter opened with goal number two by O’Grady, but the Fighting Irish posted two more goals to widen its lead.

The final frame began with Marquette down, 14-7 and despite the lone goal from redshirt first-year attack Luke Blanc, the Notre Dame’s addition of four goals in the quarter led to its second road win of the season.

“The boys battled and gave it everything they had,” redshirt sophomore Noah Verlinde said. “We played with a lot of heart.”

Stimmel said he was pleased with the effort from redshirt sophomore face-off specialist Cole Emmanuel.

Emmanuel won 15 of the 20 face-offs he took, while also notching 20 ground balls. As a team, Marquette was out-shot 50 to 34 and had just two assists compared to Notre Dame’s 11. Both assists for Marquette came from redshirt sophomore attack Jake Stegman.

This article was written by Ava Mares. She can be reached at ava.mares@marquette.edu or on Twitter @avamaresMU