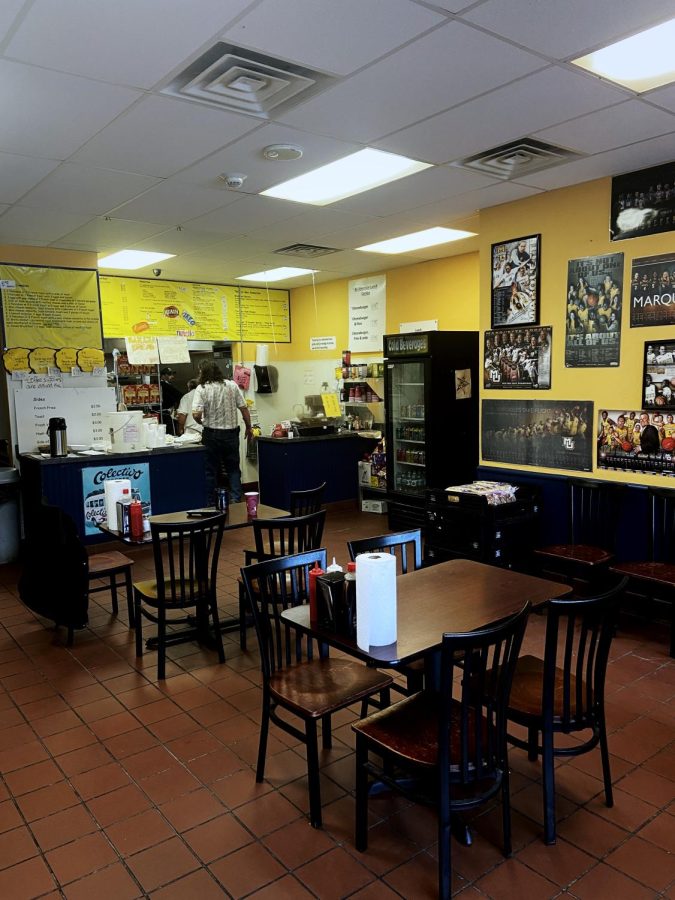 BroYo is located on Wells Street on Marquette University's campus.

Jim Gatto is a trooper. At 74, he has had strokes, concussions and even a hernia. Yet, he still comes to work with a smile on his face.

Recently, the public learned of its closure due to Gatto’s health issues through a sign posted outside the restaurant. It read: “Several medical issues are forcing me to sell ‘BroYo.’ Mentally, I can still do it- physically, I can’t.”

Although times are tough, Gatto is quick to lighten the mood with a joke.

“I feel like somewhere I must’ve wandered into the garden with Adam and Eve and had some forbidden fruit the way I keep getting injuries,” Gatto said. “I like to joke around. Too many of us, we don’t laugh enough.”

Kelsey Gramins, a sophomore in the College of Nursing, was upset when she heard about the closure.

“I texted a lot of my friends and people that knew about it (BroYo) and everyone wanted it to stay open. It was really upsetting because the owner and his workers always worked hard to keep it open. It’s just really sad that he’s going through these medical issues,” Gramins said.

Iain McCarter, a senior in the College of Arts and Sciences, has been going to BroYo since move-in day of his first year. His go-to order is the house breakfast with bacon and hash browns.

“I normally get takeout, but the couple of times I’ve been inside it was a good atmosphere, and it was really busy. It’s a cool little breakfast place on campus, I love the aesthetic,” McCarter said.

Gramins’ favorite order is a croissant breakfast sandwich with ham, egg and cheese, and a side of bacon.

“The first time I went to BroYo was fall of 2021, I just remember walking over there with two of my friends who wanted to get brunch there. The owner is so friendly and really working hard to keep open his business, all the workers are super nice too,” Gramins said.

She explained the reason she went back was the big portions of food offered for such an affordable price.

“I would say the food is probably the biggest pull just because it’s so good, really good prices too. The food alone would be the main reason I would go back, and you can support a local business too,” Gramins said.

McCarter also mentioned the effect BroYo closing might have on students.

“There’s not a lot of food options on campus, and it would be one less food option which would suck. Students would have to rely more on dorm food,” McCarter said. Marquette’s website lists six on-campus restaurants.

Gatto explains that if he could work it out, he would prefer not to sell it.

“If we had more workers it would be less of a problem, and because of the pandemic we can’t have stuff delivered to us we have to go pick it up which is hard to do in my condition,” Gatto said.

If he found the right buyer or seller, Gotto says he might sell BroYo but so far there are no takers. Gatto’s goal is to keep working while he can and keep BroYo open.

“People should definitely go and try to help them find an owner or do whatever you can to try to support them to try to keep BroYo alive as long as we can,” Gramins said.

For those who are interested in supporting BroYo’s business while they’re still open, visit their website broyocampustown.business.site.

This story was written by Jolan Kruse. She can be reached at jolan.kruse@marquette.edu.