Heiser and Harrow vs. Flowers and Price 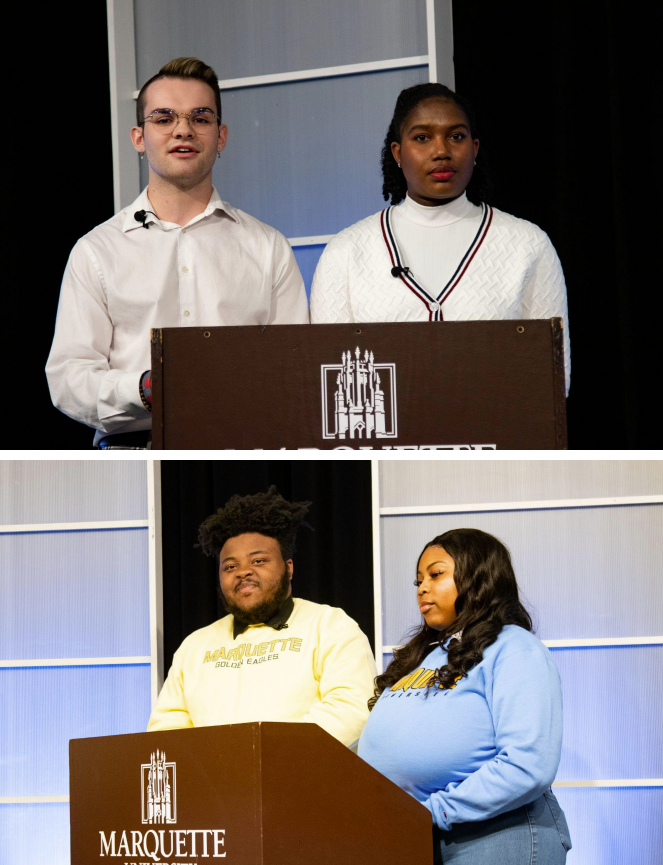 Both tickets had a change to explain their campaigns in the MUSG debate on Sunday.

“We believe that Marquette students always strive for greatness, but it should not be at the expense of their mental and physical health, as well as their personal, intellectual, and social well-being. Cam and I, if elected, would like to focus on mental health programming and creating ways to enhance the student experience and bolster student success,” Harrow said in the MUSG debate.

They also want to work to combat microaggressions on campus, better prepare students for service learning and combat food insecurity among students.

“As a Black woman I came into this campus as a freshman and automatically I was already targeted. I was targeted because I grew up in 53206 zip code, because I was first generation, I was low income, I was an educational opportunity student and a lot of that has put stigma on Black women but also marginalized communities on campus,” Price said in the MUSG debate.

Both tickets have improving student mental health as one of their main campaign goals. Heiser and Harrow want to have student voices involved in the planning of the new wellness center and bring back Mental Health Days.

“We know that the weekend sometimes isn’t enough time to de-stress and get ready for the next week and a lot of times both of those days are spent doing homework,” Heiser said in the MUSG debate.

The Heiser/Harrow ticket want to create a campus community that flourishes at Marquette.

The Flowers/Price ticket want to ensure that every student is comfortable on campus and that their voice is heard.

“We want students to feel included and amplified here and that their voices matter, they deserve to be here and that this is a space for them,” Price said in the MUSG debate.

All eligible voting students will receive an email in their Marquette email inbox with a link to vote. Voting will be open from 12 a.m. to 10 p.m. Senior students will also be voting for a commencement speaker.

Election results will be announced in a press conference March 30 at noon, with the location to be determined.

This story was written by Megan Woolard. She can be reached at megan.woolard@marquette.edu or on Twitter @MeganWoolard4