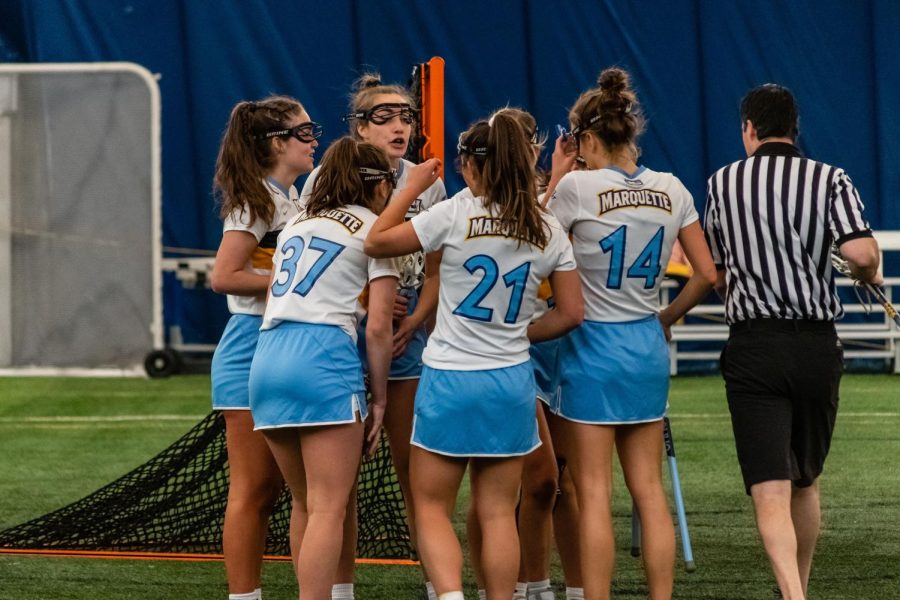 Marquette women's lacrosse in its win over Central Michigan March 27.

After dropping both games on its west coast road trip, the Marquette women’s lacrosse team returned to Valley Fields  hosting Central Michigan Sunday afternoon. With nine different players finding the back of the net, the Golden Eagles took down the Chippewas 19-13 to improve to 3-0 at home on the season.

“I’m really proud of our team today, I think we fought really hard, it was a true team win,” head coach Meredith Black said. “Every single player from the bench to the field had an impact on the game and we need that, we don’t have enough super stars to beat teams with one or two players having six goals.”

It was a quarter of runs to begin the action, as Central Michigan jumped out to a 2-0 lead in the first five minutes of the game with goals coming from midfielders Maggie Diebold and Kendall Hoyt.

Marquette responded with five-straight goals in a span of just under three minutes to take a 5-2 lead with 6:17 left in the opening frame.

The 5-0 run for Marquette was powered by just the third hat-trick of the season for senior midfielder Lydia Foust.

Foust finished the afternoon with five total goals, the most she’s scored in a single game this season.

“I worked this week on finishing my shots, I’ve had issues this season putting it (the ball) in the back of the net and I think that once I went by someone I really just looked to capitalize on that opportunity and not turn the ball over because that hurts my teammates,” Foust said.

The Chippewas responded to the Golden Eagles’ run with a 3-0 run of their own to tie the score at five goals a piece with 2:08 left in the quarter.

The two sides would exchange goals to end the frame before heading back to their benches tied 6-6 after the first quarter.

At the beginning of the second quarter, Marquette would make a change in net as first-year Brynna Nixon replaced  graduate student goalkeeper Amanda Rumsey. Rumsey allowed six goals in the first quarter without recording a save.

It wasn’t the best start for Nixon as she allowed the first two goals within the first four minutes of the second quarter.

After the first two shots got past her, Nixon went on to save four of the next five shots on goal, which helped Marquette go on a 4-1 run and take the lead into halftime at 10-9.

“She was awesome today, (I) definitely gave her (Nixon) a shoutout in the locker room,” Black said. “She was ready, being a backup goalie it’s hard, you always have to be ready for whatever is happening. And our starter (Rumsey) wasn’t feeling it in the first quarter, (it) happens but Brynna gets called on and she was ready and (she) crushed it.”

Marquette’s defense turned up the pressure on Central Michigan in the third quarter, shutting out the Chippewas 5-0 in the third.

The Golden Eagles took a 15-9 lead heading into the final 15 minutes of play.

Trying to mount the comeback, Central Michigan scored three of the first four goals of the fourth quarter to bring the score to 16-12 with 8:37 left.

That is as close as the Chippewas would get as the Golden Eagles flipped the script and scored three of the next four goals over the final eight minutes to close out the game.

“We changed our focus to be rather than 60 minutes of play, 15 (minutes of play) just win the quarter,” Black said. “That change of focus… really worked, I think it’s easier for our team to focus on a shorter period of time rather than the whole game, so we did, we finally played four good quarters.”

Foust led the way for Marquette with six total points, followed by junior attacker Mary Schumar, who scored her second hat trick of the season while adding one assist.

Marquette (5-6) will now begin BIG EAST play and a stretch of four of its next six games at home. Before that stretch the Golden Eagles first conference opponent will be a road matchup with the UConn Huskies April 2. at 11 a.m. CST.

“UConn is huge and so I think since we have been home for two weeks now it will really help us be ready to go when we get to that UConn away game and then when we get back home hopefully we’re rolling and ready to get those wins here (at Valley Fields),” Foust said.