The Meladies: female a cappella group 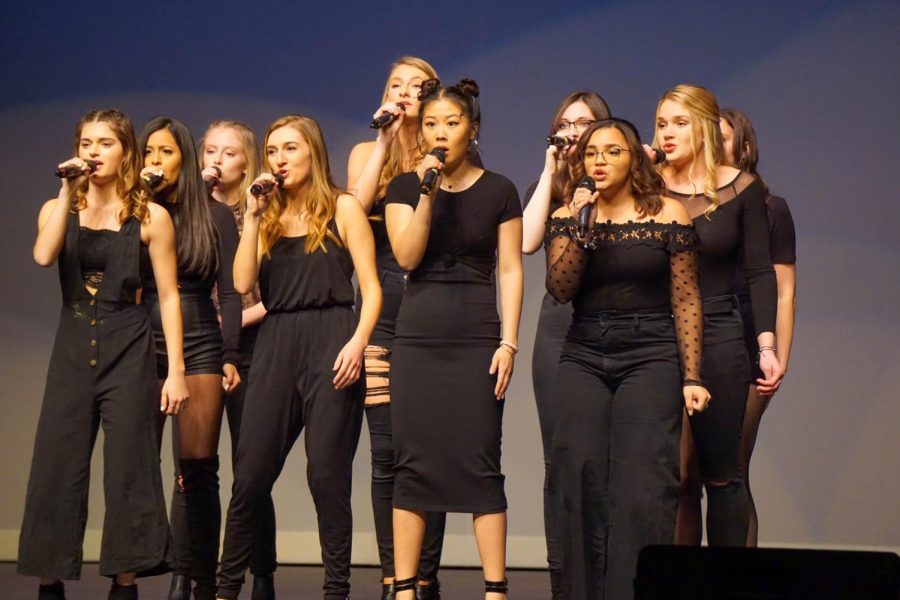 The Meladies are an all-female a capella group on campus

Marquette University students take the stage performing with one single instrument: their voices. The Meladies is an all-female a cappella group at Marquette that focuses on building sisterhood and bonds through music.

Michaela Brooke, a junior in the College of Health Sciences, is the music director of The Meladies. This is her second year in the group and said that the organization has made the world of a difference to her time at Marquette.

“I finally feel as though I have found my place and people and throughout my time as a ‘Mel’, I have grown so much as a musician, a leader and simply as a person,” Brooke said. “I feel so lucky and grateful to have been given the chance to become part of this special group.”

The Meladies put a lot of emphasis on the sisterhood that forms between performers. The Meladies said that it’s easy for them to feel so close to each other due to their universal passion for music as well as the encouragement for all-female groups to feel empowered.

Molly Buzzelli, a sophomore in the College of Arts & Sciences, has been a part of The Meladies for almost a year . She said that the group has had a huge impact on her time at Marquette because it has given her the chance to make some of the best friends and memories she has.

“My favorite part about the Mels is our bond and how well we work together. It’s so amazing to see a song through start to finish and work together to be the best that we can be,” Buzzelli said.

Buzzelli and Brooke had very similar reasons as to why they joined the group in the first place. Buzzelli said that she decided to join The Meladies because she has always had a love for singing and wanted to continue doing it in college. Brooke also said that she loves singing and knew that the group would fit for her.

“I knew the Mels were the right fit for me as I learned more about them: a group of women dedicated to lifting each other up and creating a space where everyone’s voice can be heard in more ways than one,” Brooke said.

Alejandra Rivera, a junior in the College of Arts & Sciences, has been a member of The Meladies for almost three years now. She said that this group has made Marquette a home for her, and she is very excited to see what’s in store for the future of The Meladies.

“Not only do we make music together, but we are friends who cheer each other on. We push each other and complement each other very well. It has been a safe place to relax and do something I enjoy in the midst of stressful weeks,” Rivera said.

The Meladies have a spring concert on April 9th in Varsity Theater on the Marquette campus at 7pm. She said that during the spring semester the group is planning on recording an album that will give people the chance to listen to the group’s voices whenever they wish.

“This will be my first concert as music director so I can’t wait for people to come and hear what we’ve been working on,” Brooke said.

The Meladies were established in 2012 by a group of women at Marquette University who wanted to form the first all-female a capella group in the university’s history. From what was once casual singing in stairwells to now events, competitions, and albums, The Meladies said that they have taken great strides in their accomplishments and have no intention of slowing down.

Because the group is the first and only all-female a capella group on campus, they have advice for other females who want to pursue singing.

Juliana Suarez, a first-year in the College of Art & Sciences, is the visual director of The Meladies. Suarez said that students who are interested in singing should take a risk and audition for the group.

“Just go for it. Put yourself out there as scary as it is. These girls are all so welcoming and accepting and it made the audition process so much easier. We would love to have you,” Suarez said.