BASELINE: Women’s basketball advances to second round in 20-point win 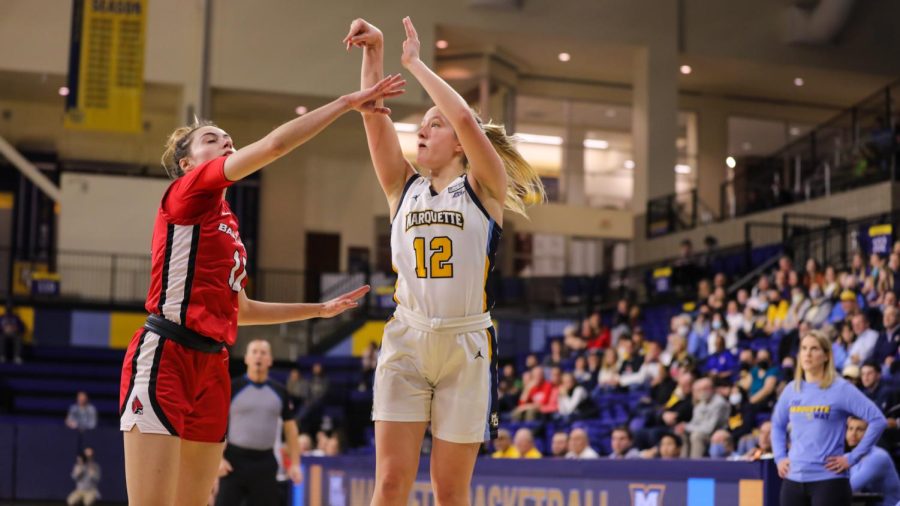 In its first game in 10 days since losing the conference semifinals to UConn, the Marquette women’s basketball team took on the Ball State Cardinals in the first round of the WNIT Wednesday night at the Al McGuire Center.

Behind four double-digit scorers, the Golden Eagles took down the Cardinals 93-70 to advance to the second round of the tournament.

Here is a breakdown of the Golden Eagle’s win:
Game MVP:
Senior forward Chloe Marotta put together a strong performance Wednesday night, putting up a season-high 19 points, a career-high 17 rebounds and four assists.

Marotta jokingly said that a lot of her rebounds came from” the ball just dropping into her hands.”

“I think when the ball goes in it’s great but when it doesn’t you gotta go up and get that rebound and I was fortunate to be in the right positions tonight,” Marotta said
Key Stats:

The Golden Eagles outscored the Cardinals 33-6 in fast break points.
Marquette out-rebounded Ball State 51-30 on the night, including a 20-12 advantage on the offensive glass.
Marquette had 24 assists on 36 made field goal baskets, while Ball State had 12 on 28 made field goal baskets.
Graduate students guard Karissa McLaughlin and Lauren Van Kleunen along with Marotta combined for 63 of Marquette’s 93 points.
Marquette shot 7-f0r-14 from the three-point line, six coming from McLaughlin.

Wednesday night was the 10th time that Marquette hosted a WNIT game. The Golden Eagles are now 8-2 in home WNIT games.
McLaughlin’s 24 points marks the eighth this season and 20th in her career where she finished with 20 or more points in a game.
It is the 74th time in her career that Van Kleunen scored in double figures.
It is the fourth time this season that Marquette scored 90 or more points. The last time the Golden Eagles hit this feat was in its BIG EAST Tournament quarterfinal win over DePaul, when they scored 105 points.
This was the third time this season Marquette finished with multiple 20-plus point scorers.

Quote of the Day:
“She (Marotta) was great, I thought she was at the right place at the right time in a lot of situations,” head coach Megan Duffy said. “When she’s always crashing and wanting that basketball, the basketball gods kind of look at you and say ok it’s gonna fall in your space a little bit today.”
Next Up:
Marquette will now host the Purdue Boilermakers in the second round of the WNIT Tournament Monday at the Al McGuire Center. Tip-off is scheduled for 7 p.m. CST.

This article was written by Jackson Gross. He can be reached via email at jackson.gross@marquette.edu or on Twitter @JacksonGrossMU.