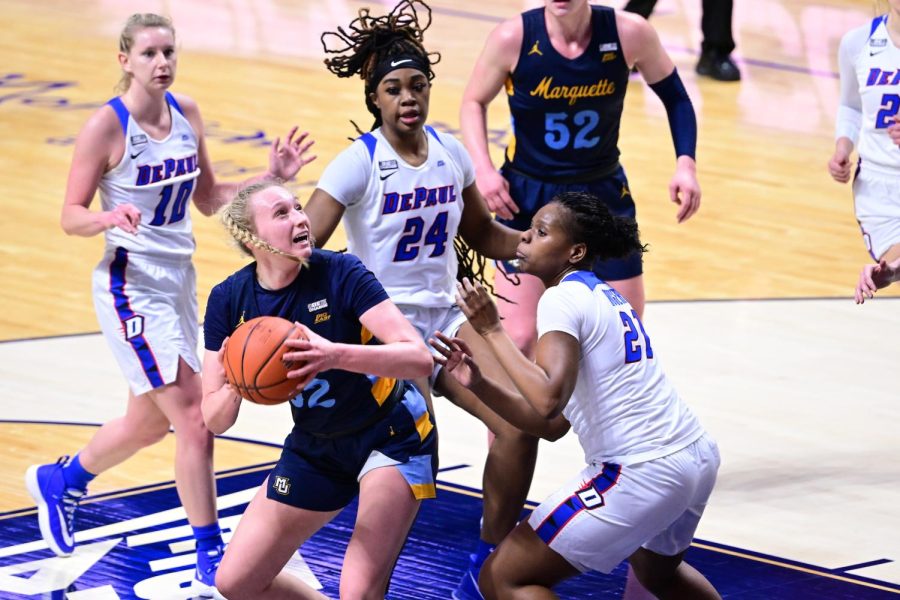 UNCASVILLE, Conn – It was a battle between two I-94 rivals at Mohegan Suna Arena as Marquette women’s basketball defeated DePaul 105-85 in the BIG EAST Quarterfinals Saturday afternoon.

“Just overall completely thrilled about our effort and performance this afternoon,” Marquette head coach Megan Duffy said. “I couldn’t be more proud of the collective effort of this Marquette team and the way we fought, the way we scored the basketball.”

It was a game where Marquette set new BIG EAST Tournament records for most field goals made (44) and highest field goal percentage (65.7%). However, DePaul head coach Doug Bruno said another stat defined the game.

“The score was really 49-17 and that was the rebounding numbers,” Bruno said.

The first five and a half minutes of the first quarter set the pace for the remainder of the game as DePaul led 16-15 at the under-five media timeout.

Then Marquette subsequently went on an 8-0 scoring run starting with a baseline jumper from junior guard Antwainette Walker, giving them a 23-17 lead with 55 seconds left in the quarter.

To close the final 40 seconds of the quarter, DePaul outscored the Golden Eagles 5-2 with Karlen scoring a layup at the final second to send Marquette up 25-22 heading into the second quarter.

The Golden Eagles continued to play at a fast pace and shot efficiently in the second quarter, as a 5-0 run in the frame increased Marquette’s lead to 10 at the 4:27 mark.

The Golden Eagles went on a 5-0 scoring run which included an and-one for Karlen and gave them a 10-point lead with 4:27 left in the first half.

Behind an efficient shooting half, 24-for-37 from the field including four 3-pointers, Marquette went into the half up 54-43.

Karlen went a perfect 7-7 from the field on her way to a team high 16 first half points. She said her play in the first half and throughout the game stemmed from knowing what DePaul is capable of.

DePaul opened up the third quarter with a 7-2 run forcing Duffy to call a timeout.

“As a coach when you prepare for DePaul you know the run’s coming,” Duffy said. “I think the overall theme of today is we kept responding, we kept bouncing back.”

Coming out of the timeout, BIG EAST Freshman of the Year Aneesah Morrow made a mid-range jumper to increase the Blue Demons lead.

After DePaul started the third quarter hot from the field, the Blue Demons were unable to score a field goal in the final 3:57 of the quarter. In that time, Marquette outscored DePaul 9-1 including a 5-0 scoring run, all coming from Van Kleunen.

The Golden Eagles opened the final frame on a 6-2 scoring run to increase its lead to 79-64, their largest up to that point prompting DePaul to quickly called timeout with 8:07 to go.

Marquette continued to keep it foot on the gas scoring 32 points in the quarter, cruising its way to the victory.

“I thought Liza Karlen was terrific,” Duffy said. “To see her kind of be the lead almost in some things today was great.”

To lead the way for DePaul was Morrow, who finished with 29 points and six rebounds.

With the win Marquette (21-9, 13-7 BIG EAST) advances to its sixth straight BIG EAST Tournament semifinal where they’ll play No. 7 UConn tomorrow at 2 p.m. CST on FS1.