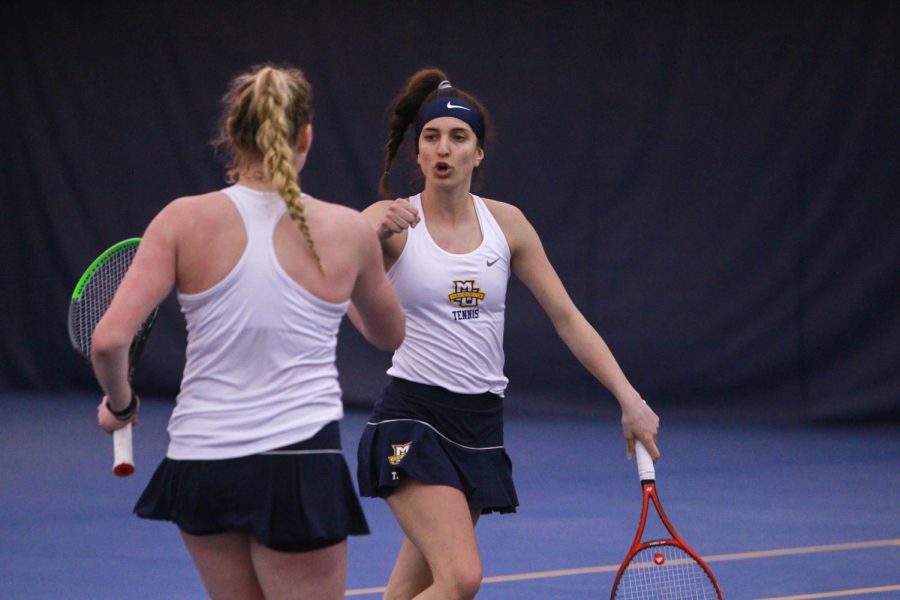 Hailing from Pancevo, Serbia with the dreams of one day becoming a professional tennis player sophomore Emilija Kojcic found her fit playing in the double’s lineup for Marquette women’s tennis.

For Kojcic, coming to Marquette as an international student was the easiest, but she said she found home on the team surrounded by other Serbian and international players.

“There were a lot of Serbian girls on the team which I really liked and the fact that I could speak my language and feel more comfortable with people around. It really helped me a lot in choosing Marquette,” Kojcic said.

Kojcic said as a kid she knew she wanted to take her tennis to the next level, she started to gain confidence over the years.

Coming from a small town, where it was a struggle to pay for the costs of tennis and find opportunities to play at a high level, she said the Golden Eagles provided her with the chance to make her mark.

“For me, the greatest thing I could have done for myself was to come and play tennis and also get an education,” Kojcic said. “Playing college tennis has helped me support my parents to stop dealing with the financial difficulties that come with playing tennis.”

Kojcic said she first heard about Marquette through assistant coach Dusan Medan, who is also Serbian. Medan closely followed her youth career as well as serving as the main point of contact with her coaches in the recruitment process.

“Talking to her coaches, I knew from a tennis standpoint what she was going to bring,” Medan said.

Medan said Kojcic’s competitiveness has been crucial for the lineup and is something he looks for in a player.

“The level of competitiveness and talent level is very high and that is what we are seeing so far this season,” Medan said. “She is a well-rounded player that has a lot of upside and experience at playing at a high level, which is very valuable.”

Kojcic said her relationship with her doubles partner Natalija Popovic makes for a good outcome on the court every time.

“She is there to back me up, support me always and it is very important that we are also really good friends so we can make an impression against teams,” Kojcic said.

Popovic said Kojcic’s biggest strength outside of her competitiveness is her volley.

“I like winning, and winning for my team, and also having Natalija as my support and sharing the court with her is something really special. I consider Natalija a great person and one of the greatest players I’ve ever played with,” Kojcic said.

“Last year I wasn’t as comfortable and didn’t have much confidence in myself playing doubles but I just doubted if I was good enough for this, so I just wanted to keep working hard and improving myself. This year is different than last year because I have more experience playing with Natalija,” Kojcic said.

Kojcic and Popovic both bring different strengths and qualities to the doubles court.

“I think that our net game is pretty good as well as our serves, we always bring energy to the court as well as to the games that are playing next to us,” Popovic said. “Since we are both Serbian we can communicate without people understanding what we are saying.”

Starting off the season 5-5, the main goal for Marquette’s number one doubles team has been focusing on each match individually and each day of practice to try to get better for the BIG EAST Tournament at the end of the season.

“As a team we are way better right now than last year. Now with new girls on the team we are more together as a family and we are going to have way better results at the end of the year,” Kojcic said.

In preparation for big games, Kojcic said she has been working on improving her returns at the back of the court and not being scared when the ball is being fired at her.

“I want to work on my returns because I think returns are really important in starting the point so Natalija can also move at the net off of my return, and I would like my serve to be more consistent so I can also help my teammate over at the net,” Kojcic said.

This article was written by Hannah Freireich. She can be reached at [email protected]