Marquette falls in close battle with No. 16 Michigan 12-10 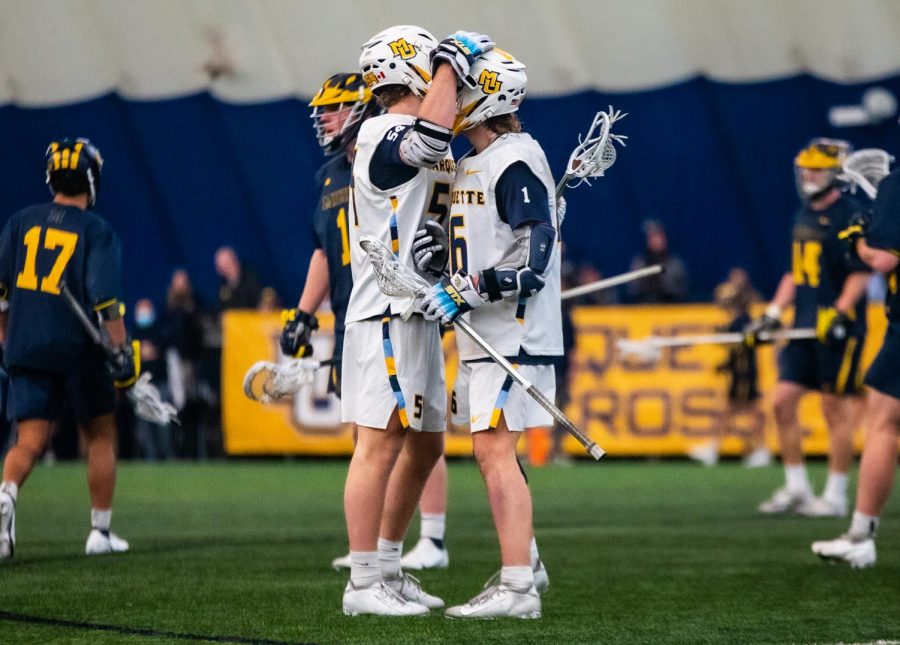 After falling to the University of Utah in its home-opener on Saturday, the Marquette men’s lacrosse team was back at home to face No. 16 University of Michigan Tuesday afternoon looking to snap its two-game losing streak.

However, Wolverines had other plans as they defeated the Golden Eagles 12-10.

“We very easily could have been intimidated against (the University of Michigan) based off their record and their ranking, but we went right at them,” Maquette head coach Andrew Stimmel said. “We went at them for 60 minutes.”

Early in the first quarter, sophomore attacker Russel Melendez struck first for Marquette as he got a ball past Michigan’s goalkeeper sophomore Shane Carr.

Melendez’s early goal sparked momentum for the Golden Eagles as redshirt sophomore midfielder Chris Kirschner found the back of the net less than a minute later. Then, redshirt junior midfielder Logan Kreinz followed up with his first goal of the 2021-2022 campaign.

“I was really proud of our guys fight, we never have any doubt that we are going to fight hard to the final minute. That’s what I love about this group,” Stimmel said.

Marquette held Michigan scoreless for majority of the first quarter until junior midfielder Michael Cosgrove put one past Golden Eagles redshirt first-year goalie Michael Allieri with 4:59 left in the quarter.

The Wolverines responded quickly, scoring two goals less than 30 seconds apart for each other.

The Golden Eagles lost their grasp on the lead late into the first half when the Wolverines scored a total of three goals in the span of under two minutes.

An early penalty release by Michigan resulted in a man-up opportunity for Marquette, which first-year attack Bobby O’Grady took advantage of as he scored his first goal of the game for Marquette and his eighth of the season.

The Golden Eagles trailed by two goals as they went into halftime, 8-6.

Rappis scored again to kick off the second half of play, to bring the score within one.

With 8:34 left in the third quarter, Marquette went two men-up again. And O’Grady scored his second goal of the game to tie the score at 9-9.

Unforced Marquette errors stained the fourth quarter. The score stood still with Marquette trailing by three, 12-9 until O’Grady scored with 3:46 left on the game clock.

“Being a first-year is stepping into the roles that you need too, you don’t ask questions,” Rappis said.

Rappis started in replace of redshirt sophomore attacker Devon Cowan, who was out with an injury.

The contest finished with Marquette taking a two-goal loss to the Wolverines, 10-12.

As a team, the Wolverines outshot the Golden Eagles 38-30.

“We want instant gratification, I do too, but my wife told me yesterday that that’s not how it works. So, it’s a great reminder that we just have to keep hammering away and chipping away,” said Stimmel.

This article was written by Ava Mares. She can be reached at Ava.mares@marquette.edu or on Twitter @avamaresMU