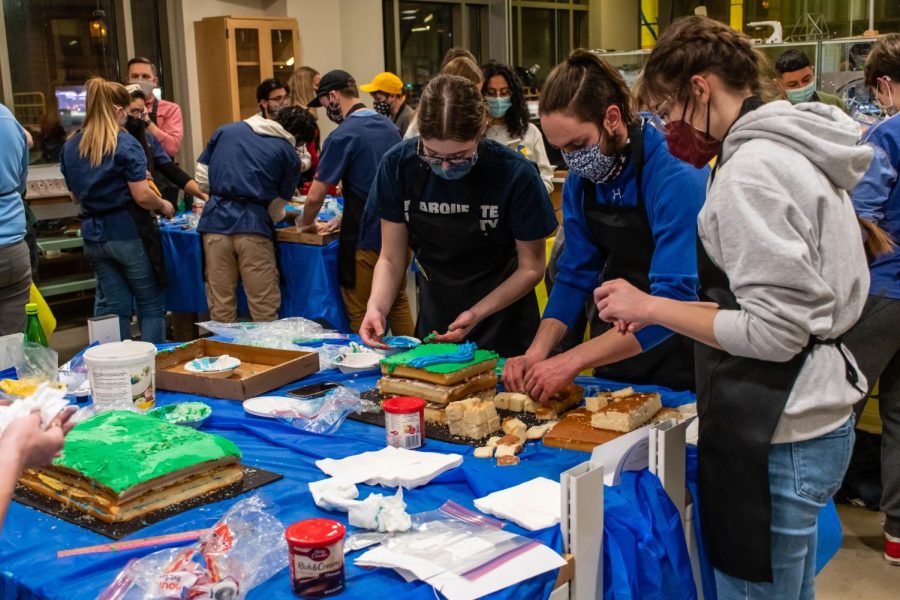 If you looked into the Discovery Learning Center Thursday night, you would have seen students running around with frosting and food coloring covering their hands rushing to decorate cakes, and you might have wondered what was going on.

For the first time, Engineering Cake Wars was featured in the events of Engineers Week 2022.

E-week, sponsored by the Engineering Student Council, is part of a national celebration to honor the many ways engineers make a difference through their profession.

“We like to provide some fun for everyone because we know they work really hard,” Tori Radermacher, president of Engineering Student Council and a senior in the College of Engineering, said.

Sarah Ernst and Shahd Sawalhi, vice presidents of Engineers Week and seniors in the College of Engineering, were inspired by baking competition shows to create an engineering styled “Cake Wars” for this year’s E-week.

“We are both very big fans of ‘The Great British Bake Off’ and so we thought ‘What if we do a bake-off’ but there’s no ovens in E-hall so we thought a decorating contest would be fun,” Ernst said.

Great fun to watch our @MUEngineering students challenge each other in cake wars for #eweek2022 @MarquetteU pic.twitter.com/NIwcFMeOZo

Teams were given one hour to decorate their cakes. They were provided with a cake, frosting, sprinkles and food coloring but what’s the catch? They had to 3D print or use engineering technology to create their own tools prior to the competition.

“I think it was really cool to see people inside and outside of engineering use their creativity in a new way,” Ernst said.

The competition was judged by Kristina Ropella, dean of the College of Engineering, Mark Federle, associate dean for academic affairs and Ben Correia-Harker, associate director of engineering and innovative leadership development.

“It was nice to be able to do an event around design and engineering that isn’t the traditional sort of thing,” Ropella said. “When you watch the cooking shows, you realize the amount of creativity and design and tools so we thought let’s give students something fun to just come together and do something creative and exciting and something different.”

Bonus points were awarded for each cake tier, for a creative and engaging demonstration of their final cake and if they worked well with their competitors to share resources.

“Zach focused on the tools and he helped 3D print a lot of stuff. Gabby and I did a lot of the smoothing and the piping and then Jordan just kind of ran around everywhere seeing where he could help, he made a lot of our icing and added details,” Kat Meza, a member of Shop Squire Squad and a senior in the College of Engineering, said. “It was just really exciting to see our hard work pay off.”

“Most of the time I’m just in my room studying so it’s nice to get out and do something else and break away from the habits of school, study, test and repeat,” Towe said.

Team Tom’s Circus Monkeys won second place with their McCormick Hall inspired cake. They were given a party at the Union Sports Annex Bowling Center and Restaurant for up to eight people with wings, samplers and drinks.

Third place was awarded to team Paul Hollywood, winning dinner with Dean Ropella, and the People’s Choice Award was awarded to team Half-Baked, earning them the title of “Stay Out of the Kitchen.” They won a cooking lesson with Mark Federle, associate dean for academic affairs.

Timothy Littau contributed to this report.