Women’s basketball comes from behind to beat Creighton 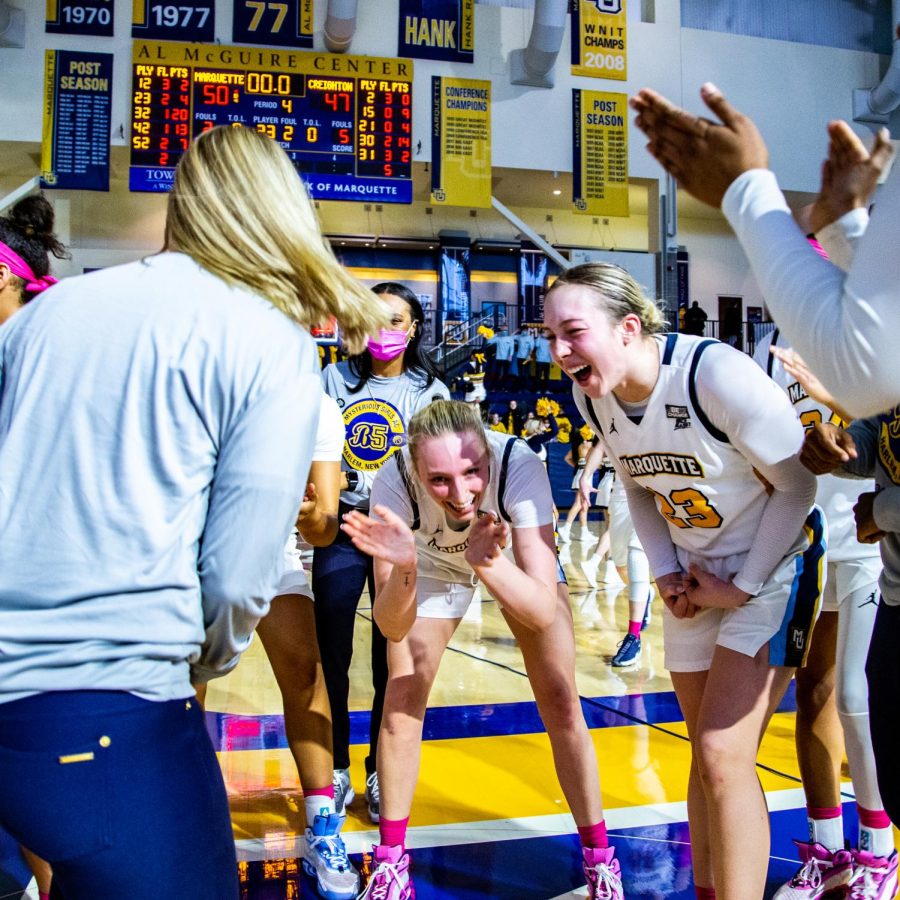 Marquette women's basketball celebrates after its come from behind 50-47 victory over Creighton Feb. 6.

With seconds winding down inside the Al McGuire Center, Creighton senior guard Tatum Rembao was searching for a teammate to make the inbound pass while down 50-47.

Sophomore guard Morgan Maly received Rembao’s pass at the top of the key and set herself in hopes of tying the game with a long 3-pointer. But then entered Marquette sophomore forward Liza Karlen.

Karlen blocked Maly’s shot, securing the Golden Eagles’ 50-47 come from behind victory over the Blue Jays on Play4Kay Day.

“Couldn’t be more thrilled about the performance this afternoon beating a really really good Creighton team,” Marquette head coach Megan Duffy said. “The moral of the story is our defense kept us in the game, we made some great plays down the stretch to execute.

Overall just really thrilled to get this home win on alumni day and as we celebrate the the Black Fives Foundation as well. A great one for our program.”

With the win, Marquette extends its winning streak to a season-high six games.

The Golden Eagles hopped out to an early 8-5 lead in the opening frame, but the Blue Jays responded with a 9-0 run to head into the second leading 14-8.

“Creighton got a lot of easy shots that they normally make, so to be only down by that honestly was a good thing,” Duffy said. “It’s just when they’ve got five players on the floor who can score in different ways, it puts a lot of pressure on your defense. And I think sometimes that then takes your offense a little slower and a little harder to make shots.”

Marquette would get within two at the 6:34 mark of the second quarter when Karlen hit a jumper to end a close to three minute scoreless drought.

Senior forward Chloe Marotta then hit a mid-range jumper to tie the game at 14-14.

Creighton would narrowly outscore Marquette 9-4 to end the half to take a 23-18 lead into the locker room.

Despite Marquette going 5-for-12 from the field in the second quarter along, Karlen finished the half making three of her last four shots to lead the team with eight first-half points.

“Liza had a great bounce back game from Friday night,” Duffy said. “Liza has found a really good chemistry to find those short jumper, that in a lot of ways feels like layups.”

The third quarter was a tightly contested frame amongst both teams. Toward the midway point of the quarter, Marotta fed a pass to Karlen for the layup to bring Marquette within one point, 26-25.

Creighton would then control during the final 3:29 of the frame. Both Karlen and Marotta combined to score seven of Marquette’s 12 points in the third alone, helping keep the deficit to six heading into the final stanza.

“When they’re face guarding Karissa (McLaughlin) or double teaming Lauren Van Kleunen, I’ve got to step up right there,” Marotta said. “I got to take advantage of what they’re giving me on offense and then also finding my teammate in any way I can.”

After being held scoreless through the first 30 minutes, junior guard Jordan King got on the board at the 7:44 mark of the fourth quarter. King’s jumper served to be a momentum shifting basket as it forced Creighton to call a timeout after the Golden Eagles trimmed the deficit to 38-36.

Coming out of the timeout, Marquette continued its momentum, building the run to 10-2. Graduate student forward Lauren Van Kleunen put in the second chance opportunity on her missed layup to tie the game at 40-40 with 5:26 left to go.

With time winding down in the game, Karlen worked the post on her way to hitting a contested jumper to bring Marquette back within one 47-46.

Then Marquette took its first lead since the first quarter at the 1:10 mark of the fourth when King hit a jumper, forcing Creighton to call another timeout.

As the trend has been during the Duffy Era, Marquette was able to etch out a victory behind its defensive efforts as the Golden Eagles held the Blue Jays scoreless over the final 2:50.

Marquette now holds a 12-1 record at home this season and is 33-6 all-time under Duffy at the Al McGuire Center.

“Hurts us a little bit with our bench (as) she’s been playing great,” Duffy said. “As quickly as we can get to get her back and healed up, she’ll be back out there.”

It is the 10th time this season that Marquette has held its opponent to under 50 points.

With the win, the Golden Eagles move into second place of the BIG EAST with a 10-3 record. Marquette will host first place UConn next Sunday at the Al McGuire Center.

“We talk a lot about February focus,” Marotta said. “That’s been our main goal these last couple weeks talking about how focused you have to be in February every single day, day by day. We knew that today, we got to take care of Creighton. On Friday, we had to take care of Providence.”

Marquette (17-5, 10-3 BIG EAST) will now travel to Villanova Friday in hopes of splitting the regular-season series. The game is set for a 6 p.m. CST tip-off on FloSports.

This article was written by John Leuzzi. He can be reached at [email protected] or on Twitter @JohnLeuzziMU.