First-year sprinter translating skills from one sport to another 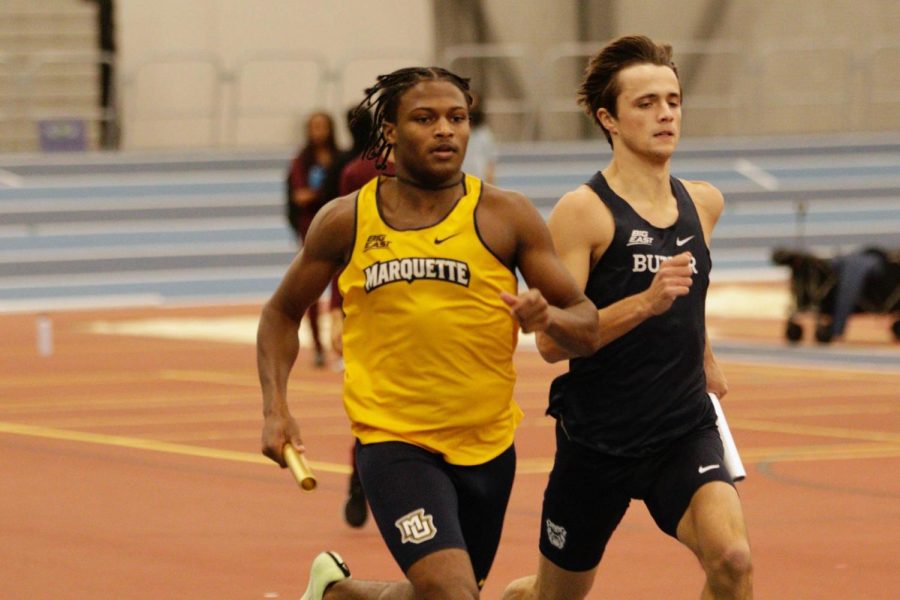 Being a defensive back at Evanston Township High School in Evanston, Illinois, to first-year sprinter at Marquette, K.T. Thomas made a transitional switch which landed him onto the Golden Eagle’s men’s track and field team.

“Like all freshmen, it’s a big learning curve. I think there’s a whole lot of a difference between the raw speed in terms of football and then the more of the technical aspects on the trackside,” head coach Bert Rogers said.

Rogers said Thomas came onto their radar late in the recruiting process.

“It was more sort of a situation where he was figuring out his stuff academically where he wanted to end up,” Rogers said. “He fell into our lap less than us having to really work on that end. We’re glad it all worked out in the end.”

“The biggest thing about K.T. is when you talk to him and you know him throughout this early season, you just realize how much he enjoys the sport of track and how he’s willing to work to be successful,” Cascella said. “It’s pretty hard to be around K.T. and not smile or laugh because he’s a really light-hearted kid.”

As a first-year in any situation, the goal is to always make an impact in some type of way. Rogers said that Thomas is making an impact through his work ethic.

“Right from the start, in the early fall when some of our workouts were just long and kind of grueling, he wasn’t afraid to just hop in there with the fast group of guys and just stick his nose in there and get after it,” Rogers said. “That mentality is nice to see.”

Cascella said Thomas is one of the first in the weight room during workouts.

Thomas said one of his goals for the remainder of the season is working on his starts.

“I was told that even professionals have this problem. Still trying to figure out what works perfectly for them,” Thomas said.

Thomas’s start can affect his goal of running sub- 50 seconds in the 400-meter dash.

“He’s realizing that he can improve his times just by improving his form,” Rogers said.

One thing that does come naturally to Thomas is how he is around his teammates.

“Just going to practice and seeing everybody brings me great happiness. I have no complaints,” Thomas said.

This article was written by Johnnie Brooker. He can be reached at [email protected]