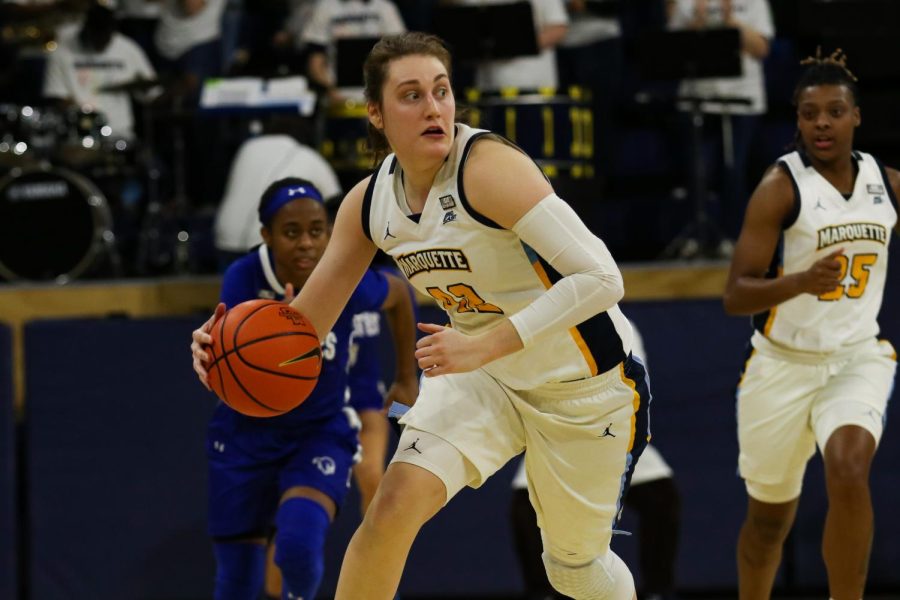 After a two-game road trip, the Marquette women’s basketball team returned home to the Al McGuire Center to host the Seton Hall Pirates looking to extend its winning streak to three-games.

Behind a strong defensive and rebounding performance, the Golden Eagles defeated the Pirates 62-43 Wednesday night to split the regular season series.

“Overall really thrilled with our bounce back win,” Marquette head coach Megan Duffy said. “We had a tough one out there, but I thought we made some really nice adjustments. Our defense was tremendous tonight. I love the way we defended and made things difficult for them.”

Both teams struggled to finds itself offensively in the opening minutes of the first quarter, before graduate student forward Lauren Van Kleunen hit a jumper to give the Golden Eagles a 2-0 lead at the 8:42 mark.

Despite Seton Hall’s defense inside the paint, Marquette put together a 9-0 run to finish the quarter to take a 13-7 lead into the second frame. The Pirates went 3-for-16 from the field in the opening quarter.

Marquette lead by five, 19-14, at the under-five media timeout in the second after Seton Hall got early quarter baskets from redshirt senior forward Sidney Cooks.

The Golden Eagles went on a close to four-minute stretch where they were one for their last 12 shots from the field.

“We were getting great shots, they just weren’t going in,” Van Kleunen said. “Thought our execution was great whether we made or missed it. We were really really good on the defensive end to keep them from scoring.”

Van Kleunen mentioned Seton Hall picked up its pressure on defensive in that stretch which caused some struggles for Marquette’s offense.

Marquette would then respond with a defensive stance of their own, holding the Pirates scoreless for the next 5:13 before taking a 27-16 lead into halftime.

Sophomore forward Liza Karlen led the team with 10 points at the half to go along with her nine rebounds and one block.

“We talked about what we thought was still going to be working but I think the big thing is this was a game where defense was fueling any kind of offense,” Duffy said.

Van Kleunen scored one-third of Marquette’s 21 points in the third quarter alone as the Golden Eagles took a 48-32.

Marquette kept their pace and their lead during the final stanza, leading 58-38 with three minutes left in the fourth quarter. Van Kleunen hit two free-throws and junior guard Jordan King hit a jumper to put them up 24 with little time left before sealing the 62-43 win.

Marquette combined for a total of 54 rebounds, out-rebounding Seton Hall by 29.

The Golden Eagles shot 40.7% from the field tonight with 21 assists on 24 made baskets.

“The other stat I love tonight was 21 assists on 24 made baskets,” Duffy said. “Thought we shared the ball really well.”

After putting up 25 points last time out against the Golden Eagles, junior guard Lauren Park-Lane was held to 11 points on the night.

“We had a lot of bodies around Park-Lane early and I thought that got to be a little bit contagious with how we were rotating and being active,” Duffy said. “Just loved the way we defended and made things difficult for them.”

Van Kleunen mentioned it was a point of emphasis coming into the game to slow Park-Lane down.

“The guards did a heck of a job on her and the post players understood where she was on the floor. She is such a great player, can get downhill and can shoot the three” Van Kleunen said. “We knew that was key coming into the game and the guards were able to step up and play great one-on-one defense.”

“We are going to take this high but (also) think we got to come down a little bit and understand we got a great team and we are going into their place to play at,” Van Kleunen said. “And again in the BIG EAST you never know so just being ready to go, locked in and continue what we did tonight and build off of that for the next game.”

This article was written by Kelly Reilly, she can be reached at kelly.reilly@marquette.edu or on Twitter @kellyreillyyy