The man who ‘made the program relevant again’ 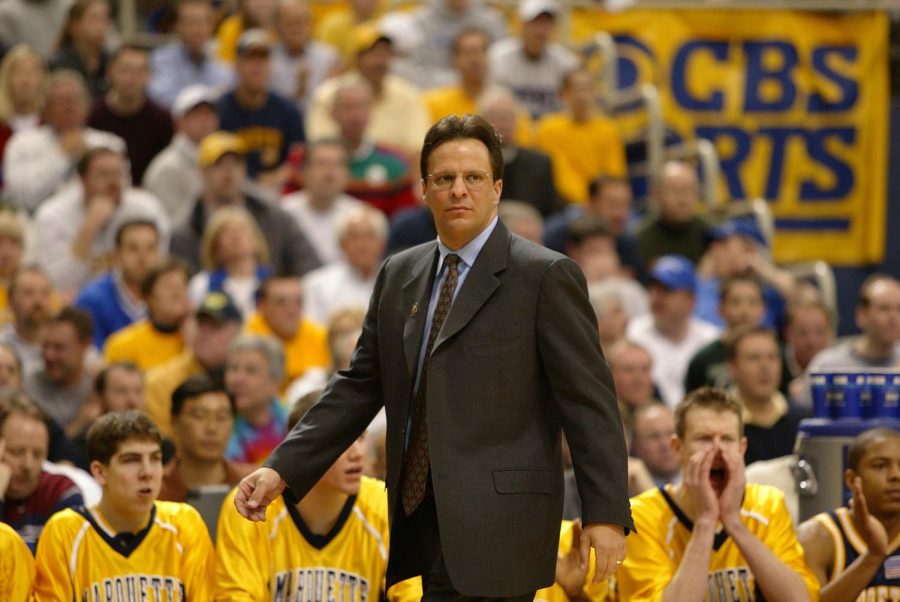 Travis Diener was sitting down, quietly listening to a young head coach present his vision for a program he grew up watching.

It was a vision that hit “right on the head” with the Fond du Lac, Wisconsin, native. And that head coach? Former Marquette men’s basketball head coach Tom Crean.

“He had this vision that he was going to help bring Marquette back to those days of the ’70s and compete for championships,” Diener said. “As far-fetched as that idea was at the time because Marquette wasn’t on that radar at that point, it was a middle of the road program when he took over.”

Crean would be right. Four years into his tenure, he would get there. He led the 2002-03 Golden Eagles to the program’s first NCAA Final Four appearance since 1977.

With Marquette, Crean finally had an opportunity to lead a group while establishing himself as one of college basketball’s biggest names.

While it has been nearly 13 years since he last coached the Blue and Gold, his impact on 12th and Wisconsin still lasts as he is set to be inducted into the M Club Hall of Fame Sunday.

“He had a lot to prove and he came from a program that was establishing itself and had a lot of success in Michigan State. (Tom) Izzo was very demanding,” Diener said.

It is common for coaches to bring bits and pieces of their past stops to their new program. Crean was no exception to that as he brought Izzo’s culture of demanding excellence from East Lansing to Milwaukee.

Broeker said the first thing he noticed about Crean was the command he had on the program.

“In my experience over the years with first-time head coaches, that’s the thing they struggle with the most,” Broeker said. “It’s not the basketball piece, it’s just that program management and coach’s ability to be engaged in multiple things and his appreciation for how all those things impact winning was evident from the get-go.”

Crean’s program management was clear to his players, including Joe Chapman.

“He’s that type of coach who’s going to push you to be the best version of yourself. You either can take it on the chin or you can leave. A lot of us who fought through those four years are better now in our adulthood.”

Diener said off the court, Crean was demanding two things: how they were going to act as a program and how people would view them.

His demand and how hard he was on us made us collectively come together because a lot of the times we weren’t very happy with him. So, it naturally brought our team together because he was the common enemy in a way. That made us better as a team.”

One area where Crean was seen to bring out his demanding presence was during the week in practices.

“To put it in one word, intense,” former guard Jerel McNeal said.

Diener recalls them being “down to the minutes.”

McNeal said Crean’s practice created a saying amongst the team which has lasted to today with those playing professionally.

“We had this saying of ‘Marquette guys are built differently,’” McNeal said. “We got guys that guard, guys that compete, guys that know basketball, understand the game and know how to make winning plays. It’s been beneficial for so many guys that come through our program.”

Chapman recalls a practice heading into the week of the UConn game his senior season, which served as Marquette’s first year in the BIG EAST in 2005.

“He had us diving for loose balls,” Chapman said. “It was just an intense week that really prepared us to face what the BIG EAST was going to be about.”

The intensity of that practice, along with the ones that would follow would translate into a fourth-place finish in the conference after being picked 12th in the preseason poll.

In addition to Crean being one of his mentors, Chapman said he has incorporated a lot of his old coach into his routine today with the Chapman Basketball Academy as well as the Golden Eagles Alumni Team in The Basketball Tournament.

“From intense practices to two to three-hour practices of not allowing guys to take a day off,” Chapman said. “I’m very intense with my practices with my guys and I build relationships with them. That’s all the stuff I learned from Coach (Crean).”

Diener said those who stuck it out for all four years and graduated from Marquette, including himself, are “having successful lives outside of basketball now that it’s over” thanks to Crean and how he prepared them for battle.

“That’s a real tribute to how he ran his program and how he helped develop us into young men,” Diener said.

“Of the coaches I’ve had the opportunity to work around, he is at the top of the pyramid when it comes to preparation,” Broeker said. “There’s nothing that he wouldn’t do to try to put our kids in a position to be successful.”

Crean was seen as a creative basketball mind by those around him.

“He was married to one thing in particular: trying to find ways for guys to score, put guys in a position to be successful and do it easily based on the personnel we had,” Broeker said. “He recognized how we could win, even as a first-time head coach, (by) just recognizing we can win here this way, recruiting these types of kids and that’s how we’re going to do it.”

McNeal called Crean a “student of the game” who “never stops learning.”

“I tell people we used to put in two to three more offensive plays before every game in shootaround,” McNeal said. “He (would) always tell us at the NBA level, you have to be able to put in a play the day of the game and be able to execute.”

Chapman said he learned how to become just not a one-dimensional player but instead learning “how to play every spot on the court” under Crean’s inspiration.

“He is a motivator,” Chapman said. “He motivates us to be the best versions of ourselves every day and that’s something that (happens) as soon as he walks into practice. You’re ready to go because he puts a belief in you that you can beat anybody, anytime as long as you’re working hard for it.”

“It’s actually difficult to kind of put in words what Coach Crean has meant to me,” McNeal said. “Without his relationship, without his guidance, the basketball program wouldn’t look the same. It would look different than what it is right now.”

As all four reminisced on Crean, camaraderie and relationships were at the forefront.

During his recruiting process, McNeal was able to see Marquette transcend as a program. He said he attended between four and five games during the 2002-03 season with his dad.

While he was able to envision himself playing with Golden Eagles’ talent on the court, he said what really drew him to Marquette was the relationship he built with Crean.

“He was the only coach that took advantage during those times,” McNeal said.

McNeal said he was able to build a special relationship with Crean as it was during the time text messaging became popular.

“I used to text him after every one of my high school games and it was so intriguing to me because he would always ask me weird things,” McNeal said. “He didn’t want to know how many points, assists or rebounds. He was like ‘did you get a lot of deflections? Did you play good defense?’

He struck a great interest from me because he was doing things differently from the way my rest of my recruiting process was going.”

For Diener, it was Crean’s ability to make him believe that helped build their relationship.

“That’s a powerful thing and belief he had,” Diener said. “From my own personal viewpoint, he had a belief in me as a player, as a person to potentially play in the NBA. That is something I never thought about until he brought it up to me and he was the driving force behind helping me achieve my dream.”

Diener would go on to being selected in the NBA 2005 Draft by the Orlando Magic with the eighth pick in the second round, playing five seasons in the NBA.

Whether you were a player, an assistant coach, staff member or administrator, Broeker said Crean treated everyone with loyalty, honesty, care and love.

“To give that amount of time to people invested in the program, when really your focus should be those kids as you are their lifeline while they’re here, but to have the time, the willingness and the compassion to invest in others is something I’ll always carry with me in my career that I learned just working around him,” Broeker said.

Whether it be the totality of his resume or who he is as a person, Crean’s legacy is still felt to this day.

In Broeker’s eyes, Crean’s legacy is “he made the program relevant again.”

“He invested in the community here, not just our Marquette community, but the Milwaukee community,” Broeker said. “He did it in alignment with who we are as an institution and I don’t think that’s unimportant either.

He never strayed a single day with the people in the program, the people around the program or the way he ran the program from the values of the institution, and at a place like Marquette University that is so meaningful.”

Diener shared similar remarks, mentioning that Crean was “the driving force” of bringing Marquette into a basketball-heavy conference like the BIG EAST.

“One of the greatest things he did when he got to Marquette was he made the campus life and the students very involved in basketball games and got them back into the fold,” Diener said. “Coming to basketball games was exciting again, we were going to have an exciting product and he just built that with his vision that he had that I don’t know if many people believed in.”

During his time in Milwaukee, Crean led the Golden Eagles to a 2003 Conference USA regular season title, five NCAA tournament appearances and three NIT appearances while compiling an overall record of 190-96.

Broeker said he’s been an advocate of Crean’s Hall of Fame induction and is pleased to see it is happening this year.

“The accomplishments on the court speak for themselves, but I really believe that the totality of Coach (Crean)’s time here, what he did for the program and how much he invested in the program both on and off the floor, that’s why he’s a Hall of Famer.”

And while there now have been three new head coaches at Marquette since Crean left for Indiana, Chapman is still set on one thing remaining the same.

“He goes down as one of the best coaches that ever came through here,” Chapman said.