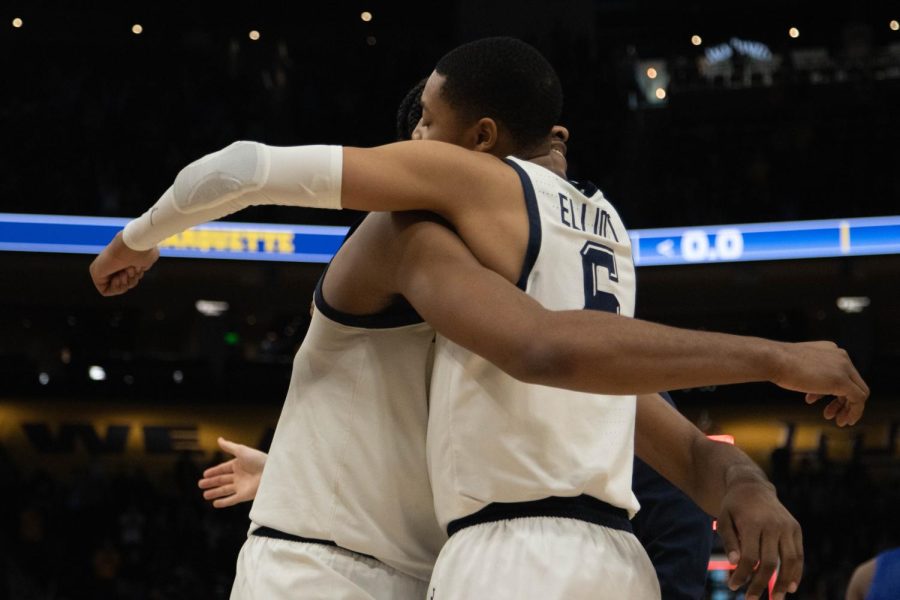 Coming in on a three-game winning streak after beating DePaul Tuesday night, Marquette hosted No. 20 Seton Hall Saturday afternoon and came away with a thrilling 73-72 victory at Fiserv Forum.

As a few games already this season have gone, this one came down to the final seconds as Marquette needed to comeback in the second half.

In the first half though, Marquette had their best shooting half of the season.

The Golden Eagles shot 9-for-14 from beyond the arc in the first half, including three each from first-year guard Kam Jones and graduate student guard Darryl Morsell. Redshirt first-year forward Justin Lewis also made two triples from deep in the opening 20 minutes.

Overall, Marquette shot 53.6% from the floor in the half. Nine threes in a half is the most in a single half this season.

“First half we had it going offensively,” head coach Shaka Smart said.

Defensively it was also a good half for Marquette as they forced 10 Seton Hall turnovers, many of those coming from their full-court press.

However, graduate student guard Bryce Aiken had a stellar first half, scoring 17 points on a perfect 6-for-6 from the field.

The start of the second half was not a similar story for Marquette, as they struggled mightily to score.

The Golden Eagles did not make a field goal without the help of a goaltend until the 11:28 mark of the second half when graduate student forward Kur Kuath made a layup.

Despite its offensive struggles, it was Marquette’s defense that kept the game close, forcing numerous Seton Hall turnovers, to trail only by three at that mark.

From there, Morsell took over and stepped up. He made back-to-back buckets to give Marquette a 67-65 lead with just over two minutes left to play. He’d finish with a team-high 26 points on 8-for-12 shooting, tie-ing his career high which he set earlier this season against New Hampshire.

“He was phenomenal,” Smart said. “Darryl gives our team more confidence. We’re not even close if Darryl doesn’t play the way he did today.”

Morsell added five rebounds and three assists in addition to his 26 points. He went a perfect 6-for-6 from the free-throw line and made a team-high four 3-pointers, the most he’s made in a game in his collegiate career.

“I just want to win at the end of the day,” Morsell said. “When the first one goes down for me, it helps my confidence. My teammates trust me, my coaches trust me so why wouldn’t I trust myself.”

With the game tied at 70, Lewis came through with one of the biggest baskets of the game for Marquette in the form of a floater that took multiple bounces on the rim before falling in. That gave the Golden Eagles the lead with just under a minute to go.

After Aiken tied the game again with two free-throws, Smart called timeout with the ball on Marquette’s end and an opportunity to take the last shot with 22.8 seconds to go.

Morsell then held the ball to run down the clock and eventually be put into the hands of redshirt junior guard Greg Elliott, who took a well-contested shot with the intent of drawing a foul on Aiken, which he did successfully to the dismay of the Seton Hall bench.

After a review, Elliott was granted two shots from the line and he made the first before intentionally missing the second in order to take a few ticks off the clock and not allow the Pirates to advance the ball to their end of the court.

“Greg did a good job creating and a good job getting fouled,” Smart said. “Darryl and some of the guys were adamant that they wanted him to miss the second free throw and it worked out for us. Good miss.”

With a one-point lead and 1.5 on the clock, there was nearly a Seton Hall turnover as the inbounder, graduate forward Alexis Yetna, moved along the baseline, which is normally considered a travel in that situation.

However, Smart said one official told Yetna he was allowed to move before the play so the officials came together and allowed the play to start over without a turnover.

On the inbound, Lewis then stole the pass and secured a victory for the Golden Eagles, forcing the Pirates 20th turnover of the game in the process.

“We always harp on defense as a team,” Morsell said. “When we’re not making shots offensively, we try to use our defense to make plays, get out in transition and help our offense.”

Lewis finished the game as the only other Golden Eagle in double-figures outside of Morsell. He had 18 points on 7-for-17 shooting as well as five rebounds and three assists.

Redshirt first-year guard Tyler Kolek finished with just two points on the afternoon, but once again led the team in assists with seven. That one basket he made turned out to be a big one in the second half as he made a tough reverse layup at the 4:53 mark.

“I feel like he had the biggest bucket of the second half,” Morsell said. “Today wasn’t his best day, but that gave us confidence going down the stretch.”

This win marks the fourth in a row in BIG EAST play for Marquette as they now push their conference record over .500 at 4-3. Their overall record goes to 12-6.

Next up for Marquette is a trip to Villanova on Wednesday to take on the No. 14 ranked Wildcats tipping off at 7:00 p.m. CT. Then they’ll be back at home next Sunday to take on No. 17 Xavier.

“Proud of our guys for hanging in there,” Smart said. “If you stay clear-minded and just stay at it, you give yourself a chance. Our guys played through some challenges, some adversity to win the game.”