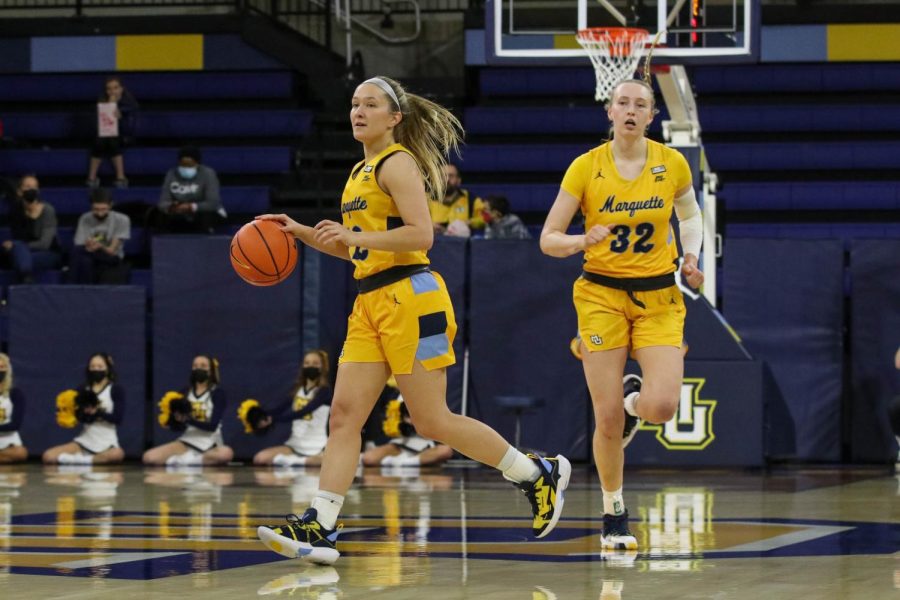 Marquette women’s basketball entered Sunday’s contest against Seton Hall looking for its first win at Walsh Gymnasium since the 2018-19 season.

However, the Pirates had other plans as they defeated the Golden Eagles 69-57 in South Orange, New Jersey.

It is the first loss of the season in BIG EAST conference play for Marquette.

The Golden Eagles came out hitting three of their first four shots from the field to begin the first quarter. Despite graduate student guard Karissa McLaughlin’s 3-pointer at the 5:19 mark of the frame to put Marquette up 10-9, a 2:51 scoreless drought to end the frame and six turnovers allowed the Pirates to etch out a 18-15 lead heading into the second.

After being held scoreless nearly the first 17 minutes of the contest, graduate student forward Lauren Van Kleunen made her first basket at the 3:03 mark of the second quarter as she got the layup to roll in.

Down four and time winding down in the half, King found McLaughlin wide open at the top of the key. McLaughlin would then hit the 3-pointer at the buzzer to send the Golden Eagles down one at halftime, 31-30.

It is just the third time this season Marquette trailed at halftime. The Pirates shot 40% from the field in the half while the Golden Eagles shot just 33.3%.

McLaughlin began the second half right where she left off in the first, as she made a backdoor layup in the first 12 second of the third quarter to put the Golden Eagles up by one.

The remainder of the third quarter was a chess match, with both teams using a balanced effort and separate runs in the frame. Heading into the fourth, Seton Hall lead 51-47 thanks to Marquette went on a four minute scoreless drought towards the end of the quarter.

The Pirates were able to gain some separate in the early part of the fourth quarter, using a 16-0 run to jump out to a 67-51 lead. Back-to-back 3-pointers from junior guard Lauren Park-Lane and sophomore guard Amari Wright put an end to any comeback for the Golden Eagles.

Marquette shot 33.3% from the field on the afternoon, which is its second-lowest shooting percentage of the season, while Seton Hall shot 49.2% from the field.

Park-Lane led the way on the afternoon for the Pirates with a season-high 25 points, shooting 9-for-20 from the field and 6-for-8 from beyond the arc. Additionally, she scored or assisted on 41 of Seton Hall’s 69 points in the contest.

For Marquette, McLaughlin put up a season-high 26 points on 9-for-17 shooting from the field and 6-for-10 shooting from beyond the arc. It is the fourth time this season, McLaughlin has scored 20 or more points in a game.

With the loss, Marquette leads the all-time series against Seton Hall 16-10.

This article was written by Kelly Reilly. She can be reached at kelly.reilly@marquette.edu, or on twitter @kellyreillyyy.