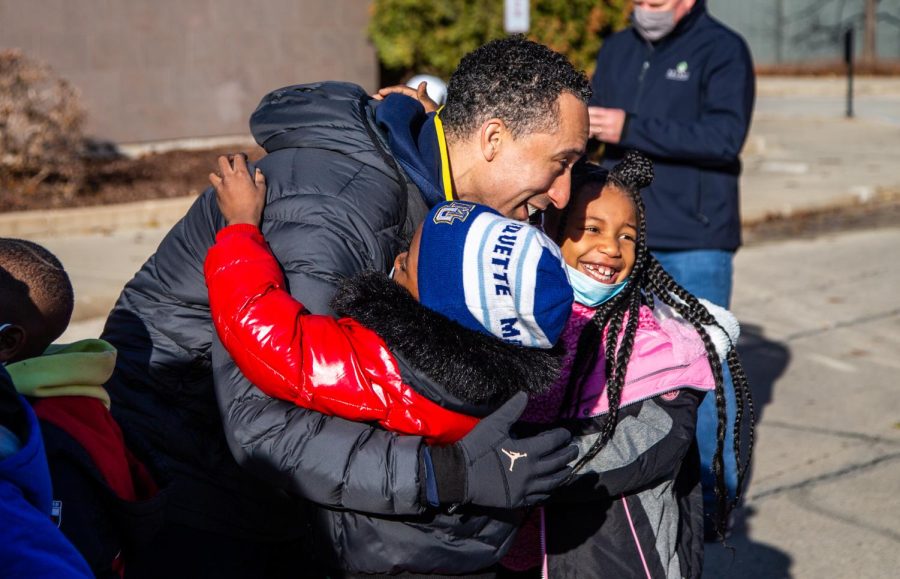 BAYSHORE — With Christmas just over a week away, the Marquette men’s and women’s basketball teams got into the holiday spirit a few days early.

Dec. 12, both basketball teams and Kohl’s teamed up to help students at Milwaukee-based St. Catherine’s Catholic Elementary School check off items from their holiday lists during a “Shopping with the Golden Eagles” event.

“This is a season of just giving and to be able to allow our kids to experience that in the flesh is amazing,” St. Catherine Catholic Elementary School principal Jade Cottrell said.

Over 50 students, ranging from first through sixth grade, each received a $200 gift card — $100 from Kohl’s and $100 from Marquette Basketball and Town Bank — to partake in the free in-store shopping spree at Kohl’s Bayshore location.

“It’s a terrific school with a great mission and this is something that I’ve had a chance to participate in for several years going back to when I was an assistant coach,” Marquette men’s basketball head coach Shaka Smart said. “I’ve always felt it was a win-win for everyone involved.”

Store manager Ben Goodness said that partnering with Marquette lined up with Kohl’s mission of improving the health and wellness of families in the local community and giving students the opportunity to give or receive gifts during the holiday season.

Being involved in “something bigger than yourself” and establishing relationships with the larger community are pursuits Smart is passionate about within his program’s culture.

“We’re part of the Marquette community but we’re also part of the community in Milwaukee,” Smart said. “There’s a lot of great kids in this city that, quite frankly, could stand to gain more opportunity. And they’re smart kids, bright kids and they have beautiful smiles. And when you spend time around them, all you want to do is see them just get access to opportunity.”

In the spirit of the holidays and the Advent season, the period of preparation over four Sunday’s for the celebration of the birth of Jesus Christ at Christmas in Christian church calendar, giving back and being thankful were at the forefront of the two-hour event.

“That’s just the motto of what Christmas is,” Morsell said. “And that’s kind of how our team is with Coach Smart and just the culture we have. We always talk about giving back.”

Morsell said being involved in community events, like helping Ms. Goss’s first-grade class at St. Catherine’s and Sunday’s shopping spree, has given him the opportunity to help influence the next generation.

“We were all younger kids at one point in our lives so to have role models and older people who have been there before and willing to help is very beneficial,” Morsell said.

Fourth grader Laniahja Patrick was paired up with Morsell. She said spending the morning with him was both “special” and “fun.”

Like Morsell, first-year forward David Joplin said giving back is important to him.

“You always grow up with people who are less fortunate, and I know a lot of people like that so it’s cool to just see what we can do for them,” Joplin said.

Being from nearby Brookfield, Wisconsin, Joplin said being involved in an event that is in his backyard was special.

“It’s a good feeling for sure,” Joplin said. “I’ve gotta appreciate it more for buying the toys and everything as I saw how expensive it got so it made me think of my dad. That’s pretty funny, but it’s really cool.”

Joplin said his favorite part of the day was his partnership with his assigned partner, another young girl from St. Catherine’s.

Despite not being able to make an impact on the hardwood, as she is still recovering from an ACL injury, women’s basketball junior guard Claire Kaifes said it was great making an impact in the community.

“Obviously I would like to be playing but doing something like this really just charges my battery,” Kaifes said. “It just gives me a lot of joy.”

Senior forward Chloe Marotta said giving back to the community is an important pillar in head coach Megan Duffy’s program.

In his introductory press conference in March, Smart mentioned one of the reasons he took the job at Marquette was its family atmosphere. That was evident on Sunday.

“The special thing about Marquette, particularly the athletic department, is it is a big family,” Smart said. “We wanted to make this event as big as we could. We wanted to open it up, certainly to any other sports teams that wanted to be involved.”

Marquette volleyball head coach Ryan Theis, along with two of his sons, Caleb and Colby, took part in Sunday’s event.

“I just love what Coach Smart is doing,” Theis said. “It’s great for the community and I wanted my kids to come be a part of it so we brought them today.”

Theis said making the initiative to be involved in an event like this lines up with the platform sports has in a community and even the nation.

“It’s part of the reason why we do it,” Theis said. “We do some youth clinics and stuff to try to bring kids in and just have them be more a part of it. Also (to) learn more about Marquette because I think there’s a lot of people out there who don’t know much about it.”

Goodness said his employees were excited to be a part of the event.

“You can hear my employees hooting and hollering on the registers just because it’s fun for them,” Goodness said. “We don’t do these events in store a lot because it’s a busy time of year for us, but to be able to do this, (they) sure are having a blast out there on the floor and they’re enjoying their time with the kids.”

Joplin said going around with his buddy reminded him of the importance of family.

“Family is everything,” Joplin said. “A lot of times, especially in sports, depending on how you play, a lot of people can get down on you so you could always lean on your family to be there for you.”

As for Smart, he said his favorite part of the event was walking around and seeing the interactions between players and the kids.

“There are some really touching moments where they talk about how much their family means to them, wanting to get different items for different family members,” Smart said. “To see our guys, participating and helping someone else go through their own process of shopping, is a lot of fun. I think it’s something our guys will remember.”

“The biggest thing is hope,” Cottrell said about the event’s impact on the St. Catherine’s students.

One area where Cottrell is hoping his students will take out of the event is being thankful for gifts given.

“We’ve been dealing with a lot,” Cottrell said. “Not just our school but every school. Not just the families within our building, but a lot of families. And so to be able to have, this is a definite silver lining of a lot of the things that have been plaguing us, so to speak, over the past couple of years.”

Morsell said he hopes students from St. Catherine’s will be able to see “everything is bigger than themselves.”

“We are here to give back to other people and I hope they realize that the world doesn’t revolve around them, it’s a lot bigger than just being focused on yourself,” Morsell said.

As for Smart, his hope for what his players will take out of the community comes from Benjamin Franklin: “A man wrapped up in himself makes a very small bundle.”

“We’re trying to really constantly get these guys, especially at this age, to understand that (you have to) get outside of yourself and focus on others,” Smart said. “It’s a great event from the standpoint of this holiday season is all about giving to others and connecting with others. And that’s exactly what our players are doing a good job of doing today.”

Aimee Galaszewski contributed to this story. She can be reached at aimee.galaszewski@marquette.edu or on Twitter @aimeegalsMU.