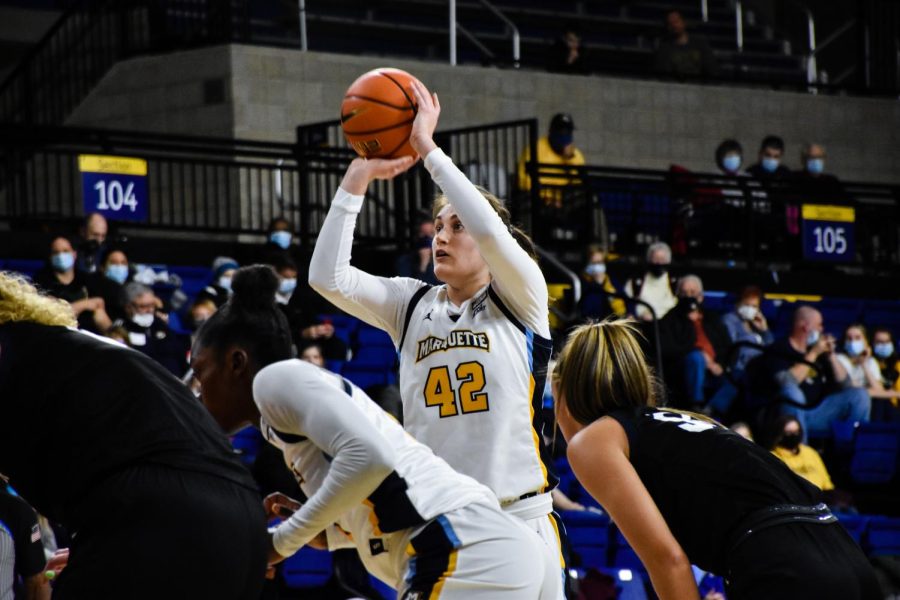 “Thrilled to finish up the weekend getting a win against Butler. It was a very difficult challenge and just a hard nosed, grinded out type of game,” Marquette head coach Megan Duffy said. “We know when we play Butler and their style of play, they want to keep it very low scoring and there’s a lot of physicality in the paint. On a day where maybe we didn’t play our best, we handled ourselves in a way where we were able to make enough plays down the stretch.”

“She’s won us a lot of games,” Duffy said. “Just her longevity here and who she is as a young-woman on and off the court, we’re so proud of her and I know she’s got a lot of great games ahead of her.”

Despite a poor and slow performance offensively by Marquette to open the game, the Golden Eagles used a prolific 6-for-7 showing from the charity stripe and defense to finish the first quarter with a 14-10 lead.

Butler shot 5-for-12 from the field in the frame while Marquette shot 4-for-12.

The Golden Eagles’ defense continued to come alive in the second, as they held the Bulldogs to 22% from the field and forced six turnovers.

Graduate student guard Karissa McLaughlin hit two 3-pointers off the fast break in a span of 1:09 to put Marquette up 23-12.

A 20-point second quarter sent Marquette into halftime with a 34-23 lead.

Butler put together a 7-0 run out of the gate in the second half forcing Duffy to call a timeout.

Coming out of the timeout, the Bulldogs continued with a 4-0 run to tie the game at 34-34. Marquette would then finish the third quarter with a 9-0 run of their own to take a nine point lead into the fourth.

“I just thought we didn’t have quite the balance we needed to,” Duffy said. “I probably should’ve called that timeout a little bit earlier and get them back locked in, but I thought the positive of that we brought some people off the bench to bring a little bit more energy.”

Marquette narrowly outscored Butler 16-11 in the final quarter and walked away with a 59-45 win to remain undefeated in conference play.

Sunday’s game was a defensive battle from the Golden Eagles as they forced 26 turnovers on the afternoon. Marquette committed just four turnovers, which was the first time since the 2018-19 season that they had less than five turnovers in a game.

“That was really a big focus for us this entire past week,” King said. “We knew that was something that had kind of been hurting us in the past couple games.”

Van Kleunen led the way with 15 points, shooting 5-for-17 from the field, while adding nine rebounds and a steal.

King finished with 12 points, a career-high six steals, four assists and four rebounds on the afternoon. .

“Jordan’s been working extremely hard to be in moments like this where we kind of need a little bit of everything,” Duffy said.

McLaughlin was the third player to finish in double digits as she finished with 15 points, three assists and a rebound.

Marquette (6-2, 2-0 BIG EAST) will travel to the Klotsche Center Wednesday to face cross-town rival University of Wisconsin-Milwaukee at 7 p.m. CST.

After losing to the Panthers last year, King said she is excited to get another shot against Milwaukee.

“We’re definitely ready,” King said. “I know that some of us experienced that last year and that’s definitely a game that we’ve been looking forward to.”