Joan of Arc is Prepped for Patronage 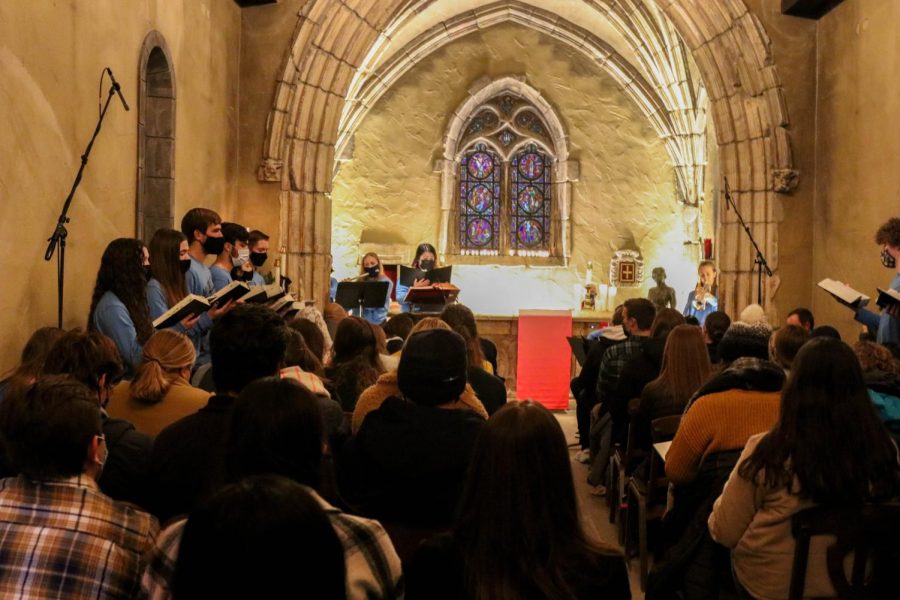 The St. Joan of Arc chapel was re-opened for Mass last Tuesday

After about 16 months of repairs the St. Joan of Arc Chapel is opening its doors again for patrons, and members of the Marquette community have said they couldn’t be more excited.

Multiple issues were fixed within the chapel, the outside including the steps and paving have been updated. The interior has also been renovated with improvements to the heated floor and ventilation systems.

Kurt Young Binter, the project manager for Facilities Planning and Management, worked on the chapel along with project members to get the improvements that were needed without losing the authenticity of the chapel.

“It all came together. If you squint it’s the same but if you look closely, we have made some significant moves that improve the space which will improve one’s worship experience,” Young Binter said.

Young Binter is especially proud with how the roof turned out. The roof dates back to 400 years ago when the building was originally constructed. Most of the roof had degraded, Young Binter said, and finding materials that blend beautifully into the roof is no small feat.

Renovations on the St. Joan of Arc Chapel started in spring 2020. Vince Micha, project architect for the Kubala Washatko Architect Inc., worked with Young Binter and is delighted with the result of their labor.

“I think Kurt should be pointed out for really holding on to the specialness of the space and not losing the deep sense of history, the story and the character of the building,” Micha said, “One could have easily made it all brand new and that would’ve been really inappropriate. In the end, it’s still a beautiful chapel.”

For some students, like Clyde Hollister, a senior in the College of Engineering, the feeling of coming back to the place he’s cherished since his first year at Marquette is incredible.

“It’s so refreshing to be back. It’s been a long time, I didn’t think I’d miss it for as long as it’s been.  To finally see it open, see that beautiful stained glass, it’s very exciting,” Hollister said.

For the reopening Mass, 40 seats were available inside of the chapel for students, accompanied by musicians, the heated floor and the .  Campus Ministry expected a large number of students to attend the 10 pm Mass.  An array of seats were also available outside for students and the rest of the Marquette Community. Volunteers like Hollister anticipated a good event with many happy faces.

Hollister said he was in attendance during one of the final Masses at Joan of Arc Chapel and he is thankful to be back in attendance now that it has come back.

“Having it back open reminds me of my freshman year, before COVID, it just brings a sense of normalcy back to Marquette,” Hollister said.

Marquette alums were also in attendance and said they couldn’t pass up the chance to miss the first Mass back on the grounds. Elizabeth Killian, Marquette alum, frequented the chapel quite often in her days as a student and was happy to see it back.

“It’s really nice to be back and see old friends. I’m coming back to a place that I’ve spent a lot of time in, I’ve prayed a lot and always loved coming to everyday,” Killian said.

Cara Fries, a first-year in the College of Communication, remembers walking past the chapel when she took a tour last year and was excited to finally attend a Mass on campus. Fries appreciated the heated floors and she was especially impressed with how the grotto came out.

The Grotto of the Virgin Mary is located behind the chapel and is free-standing and designed to blend with the surrounding greenery.

The chapel was originally constructed in the early 15th century and used as a place of worship in Chasse, France. During the time of the French Revolution it was in a state of decay. It was in the 1920s that architect Jacques Coelle completed a record in the hopes of restoring it back to its best, he writes about the chapel’s absolute uniqueness.

The village of Chasse sold it to Coelle who then sold it to Gertrude Hill Gavin, daughter of a railroad man, who brought the chapel over to her estate in Long Island, New York. Gavin was a devotee of Joan of Arc and dedicated the chapel in her name after she was canonized as a saint in 1920.

Gavin also added an altar, stained glass and the Joan of Arc stone, which was kissed by St. Joan of Arc and is believed to be cooler than all the other stones in the building. Gavin eventually sold it to Marc and Lillian Rojtman when the chapel miraculously survived a fire.

The Rojtman family then offered the chapel to Marquette University as a gift under the condition it was continued to be used for worship. In 1965 the transportation of the chapel from Long Island to Milwaukee began and reconstruction took place until it was finished in 1966.

To celebrate the chapel doors being opened, Marquette held a pageant where participants dressed up in 15th century clothing in dedication to Saint Joan of Arc. Nowadays the chapel is a staple to Marquette’s campus.

“It’s the literal and spiritual centerpiece of campus that welcomes all – from students, faculty and staff to alumni and visitors — inviting them to prayerful reflection or simply to enjoy respite from the world outside. It’s a worldwide historical treasure that graces Marquette and Milwaukee,” University President Michael Lovell said.