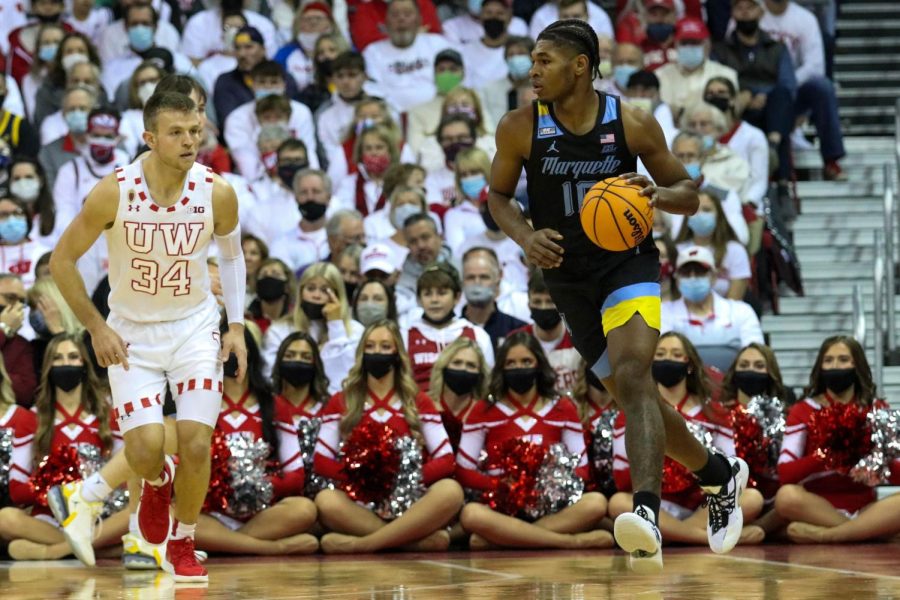 MADISON, Wis. — Coming off their seventh win of the season to Jackson State, Marquette traveled to its in-state foe No. 23 Wisconsin Saturday. The Badgers handed the Golden Eagles their second loss of the season by a score of 89-77 at the Kohl Center.

“Thought they (Wisconsin) were just a more aggressive, tougher team, particularly in the second half but even late in the first half,” Marquette head coach Shaka Smart said. “This game for our team is a really valuable lesson about how tough minded you got to be on the defensive end.”

The contest was tight throughout the entire first half with 11 lead changes and four ties but a 9-2 run to end the half by the Badgers sent them into halftime with a 34-31 lead.

Redshirt first-year forward Oso Ighodaro went 5-for-5 from the field in the first 20 minutes.

Ighodaro would be held scoreless in the entire second half.

The second half started with both teams trading basket for basket, keeping the score tied 38-38 at the 17:26 mark of the half.

Then Wisconsin took over hitting each of their next four field goals to reclaim a 43-40 advantage.

“We just weren’t locked in defensively,” Marquette redshirt first-year guard Tyler Kolek said. “I mean in the first half, we were up maybe five and they (Wisconsin) went on a 5-0 run on me personally. That kind of of really turned the game right there.”

The Badgers took over from there as they never relinquished that lead, as they led by as much as 23 at one point at the 3:03 mark of the second half.

“Obviously we made 70% of our shots, but really, I think it was the defensive side of the ball,” Wisconsin fifth-year guard Brad Davison said. “That’s what we were talking about at halftime and then after the first media timeout, just really trying to put our foot down, be assertive on that end and then you can get better looks on the offensive end.”

Marquette was led in scoring by redshirt first-year forward Justin Lewis, who finished with 14 points, shooting 5-for-11 from the field, while adding four rebounds and three assists.

Meanwhile for Wisconsin, they were led by sophomore guard Johnny Davis who put together a dominant performance. He finished with 25 points on 9-for-14 shooting from the field and 2-for-3 from beyond the arc, along with five rebounds, an assist and a steal.

“He’s turbocharged, he’s got a quick first two hand that makes him really, really tough to deal with,” Smart said. “He can score in different ways.”

Compare to previous games, Marquette struggled to score in the half court offense Saturday. Kolek said the struggles came from the team not flowing with the offense.

“We were kind of getting stagnant at points just looking around for the next guy to score and that’s not us,” Kolek said. “We don’t have that one guy who can go out and give us 25. We’ve got to play together and play team basketball.”

For the third straight game, Marquette received 30 or more points from its bench winning the advantage 40-9 off the bench. Smart also started first-year guard Kam Jones for the second straight game.

Smart said he is still looking for the correct combinations of guys to play.

The Badgers now have a 69-59 lead in the all-time series that dates back to 1917 after Saturday’s win.

Marquette (7-2) will look to rebound from its second loss of the season against Kansas State in the BIG EAST-BIG 12 Battle Wednesday at 7 p.m. CST in Manhattan, Kansas.