Marquette prepares for first true road battle against No. 23 Wisconsin 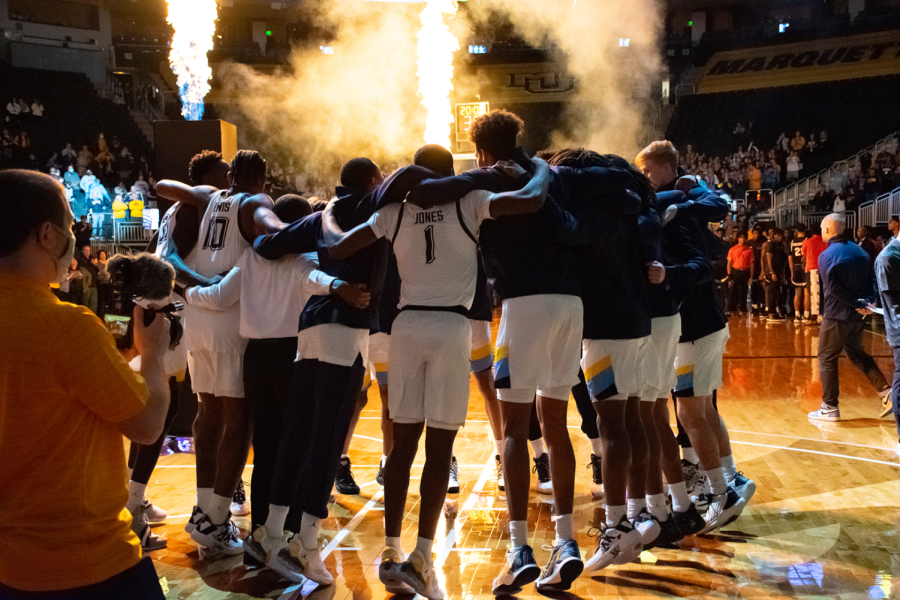 Marquette men's basketball during team introductions prior to its 83-54 win over Jackson State Nov. 30.

Marquette men’s basketball is set to take the trip up I-94 on Saturday as they face off against their in-state rival in the No. 23 Wisconsin Badgers.

The annual matchup will welcome back fans this season as last year with Marquette hosting at Fiserv Forum, the Golden Eagles took home a 67-65 win in front of an empty stadium.

That win came thanks to a buzzer-beating tip-in from redshirt first-year forward Justin Lewis off a missed free-throw with less than a second left on the clock.

“I wish I could have had the crowd there, I wanted to see them rush the court,” Lewis said. “At the end of the day though we won and winning is all that matters.”

This year’s matchup will look much different than last year, as Lewis is one of only a few players on either side that participated in the 2020 meeting.

The only player in either team’s starting lineup from last year’s matchup that will be returning is the Badgers senior guard Brad Davison. For Marquette, the only returning player who earned any minutes in the game will be Lewis.

Davison is in his fifth-year at Wisconsin and this season is second on the team in scoring at 15.3 points a game. The Minnesota native is also averaging 4.6 rebounds and 1.9 assists per game.

Marquette graduate student guard Darryl Morsell, who played against Davison for four years at the University of Maryland with both schools competing in the Big Ten, gave Davison credit for his leadership during his time at Wisconsin.

“He’s a great player who’s very versatile and can play multiple positions,” Morsell said. “Credit to him, the whole time he’s been at Wisconsin he’s been at the top of our scouting reports.”

The Badgers have been led this year in most categories by standout sophomore guard Johnny Davis. The La Crosse, Wisconsin native is leading the team in points (19.3), rebounds (5.7), assists (2.7) and steals (1.8).

“They’ve won every game they’ve played with Davis,” Marquette head coach Shaka Smart said. “They’ve got two established leaders (Davison and Davis), they’re hard to guard, make others around them better and play with a level of toughness that sets the tone for their team.”

Wisconsin’s only loss this season came against Providence at home back on November 15th. Davis missed that game due to a lower body injury.

The Badgers, with their 6-1 overall record, have a signature win on the season against then-No. 12 Houston. That came in the second round of the Maui Jim Maui Invitational, which the Badgers ended up winning after defeating Saint Mary’s in the championship.

Marquette has had a similar start to their season with their signature win against then-No. 10 Illinois and victories over West Virginia and Ole Miss, with just the one loss against St. Bonaventure.

Despite being eight games into the season already, this is the first true road game of the season for the Golden Eagles. It’s also the first time any player on this roster other than Morsell will play a game at the Kohl Center.

“You add in the element of the fans, it’s one of those things you can’t fully simulate,” Smart said. “It’s important to remember that in rivalry games, the same things go into winning that go into winning any other game. It’s a heck of an experience and opportunity for our guys.”

This will be a homecoming for Smart as well, as the Madison, Wisconsin, native will be coaching his first career game at the Kohl Center.

“My uncle, who lives in Madison, sent me a picture of Al McGuire on the scorer’s table after one of the games,” Smart said. “There’s a lot of great memories on both sides for sure.”

The overall series between Wisconsin and Marquette dates all the way back to 1917, with the Badgers owning a 68-59 edge. The teams are an even 4-4 in the last eight matchups, but Marquette has won three of the last four.

The contest tips-off at 11:30 a.m. CT. You can listen to the Marquette Radio broadcast at marquettewire.org/mur and follow along for live updates on the Marquette Wire Sports twitter account.