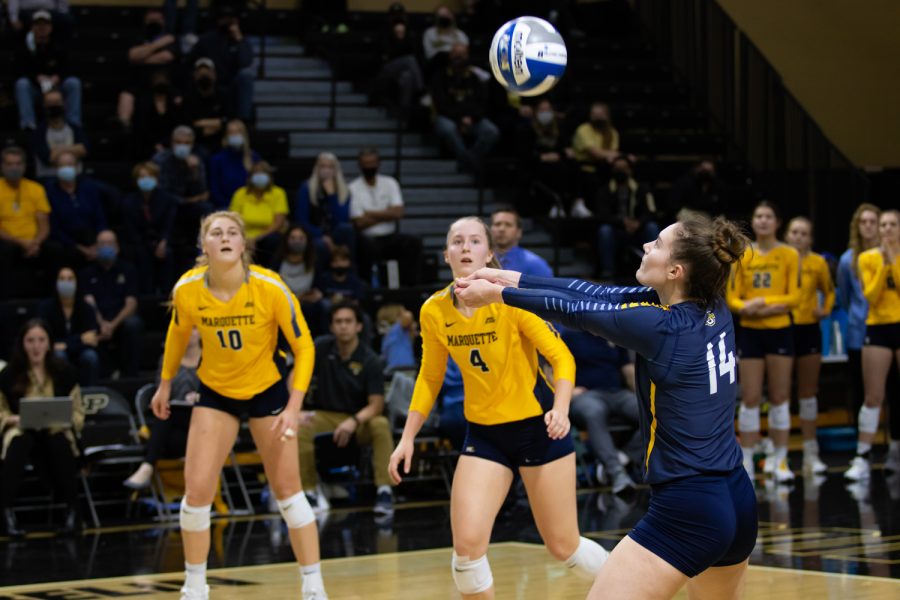 Redshirt sophomore Carly Skrabak (14) passes the ball in Marquette volleyball's 1-3 loss to Dayton in the First Round of the NCAA Tournament Dec. 2.

West Lafayette, Ind. — After losing in the BIG EAST Tournament Saturday, Marquette volleyball’s season came to an end in a four-set loss (25-20, 25-21, 26-24, 25-23) to the Dayton Flyers in the First Round of the NCAA Tournament Thursday afternoon.

“Credit to Dayton. I thought they served really, really effective in the first and I thought in the fourth as well,” Marquette head coach Ryan Theis said. “I thought they handled our serves relatively well.”

For the ninth time in program history, Dayton advances to the Second Round of the NCAA Tournament where they will face No. 9 Purdue.

Set one started out slow for Marquette, falling behind 7-3 forcing Theis to call a timeout. The Flyers would build a lead as much as eight before taking the frame 25-20.

Graduate student Savannah Rennie had five kills in the first set for the Golden Eagles. Dayton hit .382 in the frame while Marquette hit .225.

Neither team claimed to much of a lead early in the second set, with both teams trading leads and ties. But after a 3-0 run during the middle of the frame, Dayton took 15-14 lead. The Flyers then pulled away late, getting six of the final eight points in the set to take a 2-0 advantage in the match.

“Defensively we definitely could have been a bit cleaner, credit to Dayton,” Skrabak said. “They have a lot of heavy arms and they were kind of just exposing some of the areas where we could have been a lot cleaner on defense.”

In the third set, Marquette would jump out to a 11-4 lead but the Flyers battled back, eventually tying the set at 20. Several errors from the Flyers toward the end of the set gave the Golden Eagles the set 26-24. Marquette finished the frame hitting .156 while Dayton hit .244 in the set.

Marquette began the final stanza with a 4-2 lead before Dayton fought back to take a 9-7 lead. Theis’ squad then responded with 3-0 run, which included a block from redshirt first-year Carsen Murray, to bring the deficit within one 24-23.

“I just wanted to play for the senior because I didn’t want to go down a bad note or anything,” Murray said. “So my mindset was just to play as hard as i can and then focus on what I can control so that for the seven seniors I could be there for them and be that player who can keep the game alive.”

Then redshirt first-year Lexie Almodovar ended the set and match with a kill to keep the Flyers season alive.

Almodovar led the way on the night for Dayton with 21 kills.

With the loss, Marquette is now 6-10 all-time in NCAA tournament play.

The Golden Eagles finish their season with a 26-6 overall, 16-2 BIG EAST record.

Theis said it is sad to see the team’s seven seniors go.

“Just really proud of the effort that our team displayed through all the diversity that we’ve had. Just couldn’t be more proud and sad to see seven seniors go,” Theis said.