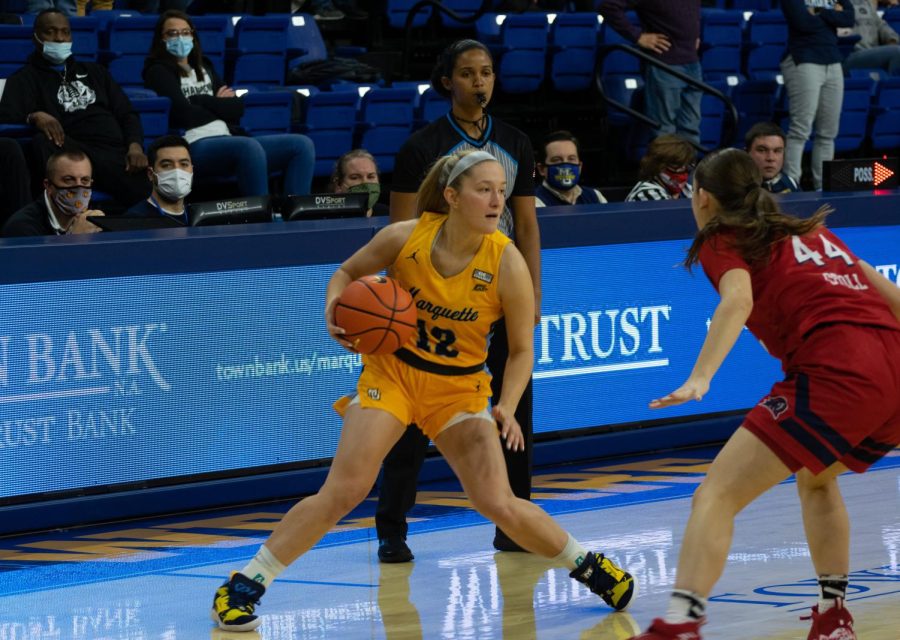 The Marquette women’s basketball team (4-2) looks to bounce back in its BIG EAST opener against the Xavier Musketeers Friday evening at the Al McGuire Center after falling to No. 20 Georgia 70-45 Saturday.

As has been the trend for the last three games, the first quarter was sloppy for Marquette which helped Georgia dominate on both sides of the ball. Graduate student Jenna Staiti hit a 3-pointer in the third quarter to spark a 14-2 run for Georgia and the Lady Bulldogs took control the rest of the way,leading as much as 27 points at one point.

The Musketeers are coming off a Saturday loss against Eastern Kentucky. Despite being tied 32-32 at halftime, Xavier outscored Eastern Kentucky 41-28 in the second half to earn their third straight victory.

Redshirt sophomore guard Nia Clark led the way for Xavier with 22 points, shooting 9-for-16 from the field, while adding four assists, three steals and three rebounds.

Under head coach Megan Duffy, Marquette is 27-9 in BIG EAST play.
Xavier finished the 2020-21 season with a record of 5-10 overall, including a 1-5 mark in road contests.
The Golden Eagles are 37-1 under Coach Duffy when leading at halftime and 26-2 when they turn the ball over fewer times than their opponent.
Marquette was picked to finish fourth in the Preseason BIG EAST Coaches’ Poll after posting a 19-7, 14-4 BIG EAST record last season.
Marquette currently sits fourth on the national leader board in rebound margin, out rebounding opponents by a combined total of 279-178 (46.5-29.7) for a +16.8 margin.
Since joining the BIG EAST in 2005-06, Marquette is 9-7 in conference openers.

Marquette leads the series with a record of 16-7.
Xavier is 1-5 all-time against Marquette in Milwaukee.
Marquette has won 10-straight games against Xavier, including a 65-56 road win in the lone meeting between both teams last year.
The past nine games between the Musketeers and the Golden Eagles have been decided by 10-plus points.

Marquette: Start with a strong offensive start to maintain a lead going into halftime. The past two games the Golden Eagles have produced an average 10 point deficit at the half.
Xavier: Limit Marquette rebounds. The Golden Eagles lead the BIG EAST in rebounding margin. Van Kleunen leads Marquette in rebounding at 7.3 per game. During Xavier’s three-game winning streak, they have limited their opponents to only 52 points per game.

Livestream: BIG EAST Digital Network on FloHoops.com and the FloSports App
Live Radio Broadcast: John Leuzzi and Kristin Parisi will have the call on Marquette Radio. Coverage will begin at 6:50 pm CST.
Live Updates on Twitter: @JacksonGrossMU, @avamaresMU and @MUWireSports