Marquette pulls away in second half, defeats Jackson State 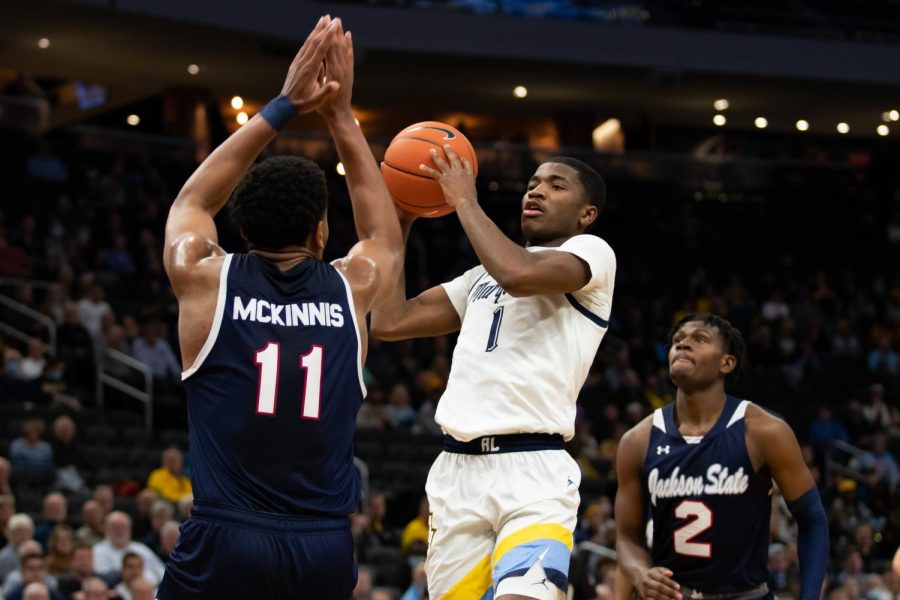 After defeating Northern Illinois on Saturday, the Golden Eagles returned to Fiserv Forum on Tuesday to host the Jackson State Tigers and came away with a 83-54 victory.

The contest was tight throughout the entire first half with both teams struggling at times to shoot the ball and neither able to get out on a run.

The score at the halftime break was tied 29-29. Both teams shot under 40% from the field and Marquette had missed five of their 10 free-throw attempts from the line. Neither team had any scorer in double-figures in the first 20 minutes.

The second half started in the Golden Eagles favor with graduate student guard Darryl Morsell going on a personal 7-0 run to force a quick Jackson State timeout. Those were Morsell’s first points of the night after going scoreless in the first half.

“Darryl’s a great leader, and we all feed off his energy,” redshirt first-year forward Oso Ighodaro said. “When he went on that run it inspired everyone to pick up their play and play harder.”

The Golden Eagles took over from there as they never relinquished that lead, as they led by as much as 32 at one point at the 1:32 mark of the second half.

“Thought in the second half our guys started with great defensive focus,” head coach Shaka Smart said. “We didn’t have the type of energy or connectivity we needed in the first half.”

Marquette was led in scoring by Ighodaro who had a career night. He finished with 14 points on 6-for-6 shooting from the field along with 11 rebounds and one assist.

“I was trying to stay active, I got a few offensive rebounds that got me some easy points,” Ighodaro said. “My guards did a great job finding me with drop-off passes.”

It was Ighodaro’s first career double-double, but the second time he’s finished with double-digit rebounds as he had 12 back on Nov. 12 against New Hampshire.

“Oso’s been great for us this season, super excited for him to get his first double-double,” Smart said. “He played with poise in our offense which is something that helps our team have a lot better flow.”

Smart switched up his starting lineup that he’d been going with every game this season prior to tonight by putting first-year guard Kam Jones in for his first career start over redshirt first-year Olivier-Maxence Prosper.

“The group that started those first seven games for whatever reason statistically wasn’t playing very well together,” Smart said. “Kam has played well, he had played well when he was in with those guys earlier this year.”

Jones only took four shots on the night, knocking down three of them including two from beyond the arc. He also tied the team-high with five assists and two rebounds.

“He’s got so much confidence, he’s going to score a lot of points here at Marquette,” Smart said. “He made some good decisions and putting him in the lineup gave us another playmaking guy that can shoot.”

Including Ighodaro’s 14 and Prosper’s 11, the Golden Eagles got 46 of their 83 points from players off the bench. That bested their season-high of 35 bench points that they recorded in their last game against Northern Illinois.

“We’ve got 11 scholarship players that are available to play that can all help our team in different ways,” Smart said. “For our bench to come in and give us a lift two games in a row is really big for us. It allows us to overcome low spots.”

Next up for the Golden Eagles is the annual in-state matchup with the Wisconsin Badgers, who are currently ranked No. 23 in the AP Top 25 Poll. They will travel to Madison for their first true road game of the year at the Kohl Center with the game scheduled to tip-off at 11:30 a.m. CT.