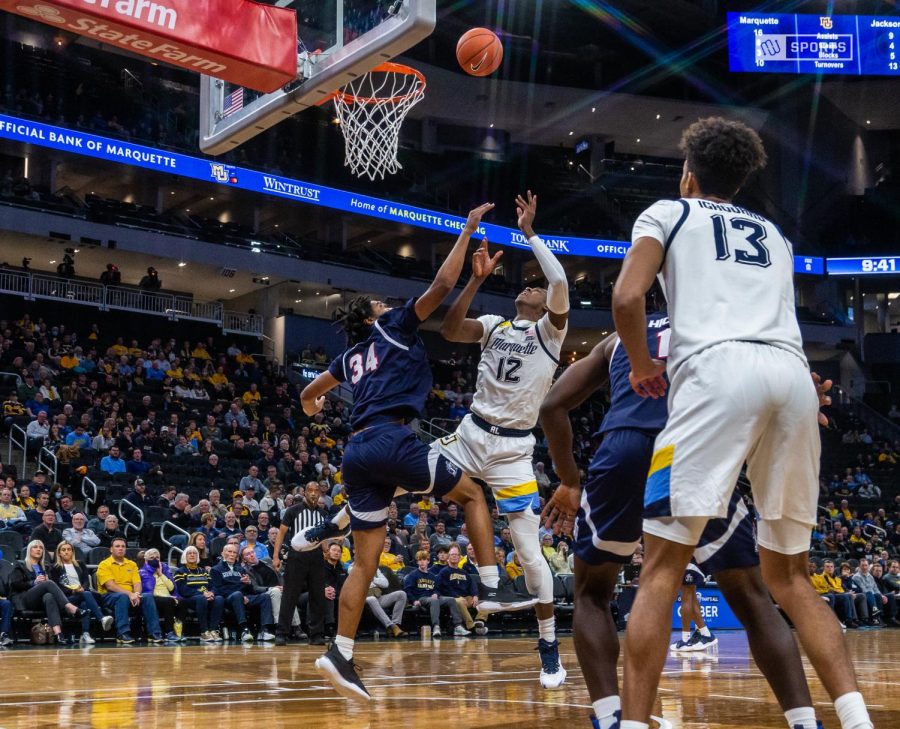 A strong second half performance helped Marquette men’s basketball to a 83-54 victory over the Jackson State Tigers to remain undefeated at Fiserv this season.

After a sluggish first half and being tied at halftime, the Golden Eagles quickly found themselves at the start of the second half as graduate student Darryl Morsell began the final 20 minutes with a personal 7-0 run.

Marquette would head onto outscore Jackson State 54-25 in the half cruising their way to their seventh win of the season.

Here is a breakdown of the Golden Eagles win:

Redshirt first-year forward Oso Ighodaro was effective in all facets of the game Tuesday night. The Chandler, Arizona, native recorded his first collegiate double-double with a career-high 14 points and team-high 10 rebounds.

“All year long his mentality has been to raise our team’s level when he comes in the game and I thought he did that. He went and grabbed the ball, he got a rebound every two minutes, actually less than that it’s terrific. We challenge these guys to get one every three minutes, he got one every two minutes.”

Smart said Ighodaro’s ability to play with poise in Marquette’s offense helped with the team having a better flow in the second half.

“I thought that’s part of why the second half we scored a lot more points,” Smart said.

After being held scoreless in the first half, redshirt first-year guard Tyler Kolek and Morsell combined for 13 second half points.
Marquette led for 25:51 of the night and their biggest lead came at the 1:23 mark of the second half at 32.
With the loss, Jackson State falls to 1-6 on the season.
Marquette shot 53% from the field, tying its season-best.
Redshirt first-year forward Olivier-Maxence Prosper finished with a season-high 11 points.
Redshirt first-year forward Justin Lewis, graduate student forward Kur Kuath and Morsell all combined for eight points on the night.
After scoring 35 points against Northern Illinois on Saturday, the Golden Eagles bench once again played a key factor into the win scoring 46 points against Jackson State.
Senior forward Jayveous McKinnis was the leading scorer for the Tigers. He had 13 points, 14 rebounds and four blocks.

Quote of the Day:

First-year guard Kam Jones finished with eight points, shooting 3-for-4 from the field and 2-for-3 from beyond the arc, while tacking on five assists and two steals.

“The only shot that he missed the whole game was a 30-foot bomb that I don’t think was so selective,” Smart said. “But the other ones were great.”

Marquette will now travel to Madison for a matchup against in-state rival No. 23 Wisconsin Saturday at 11:30 a.m. CST.