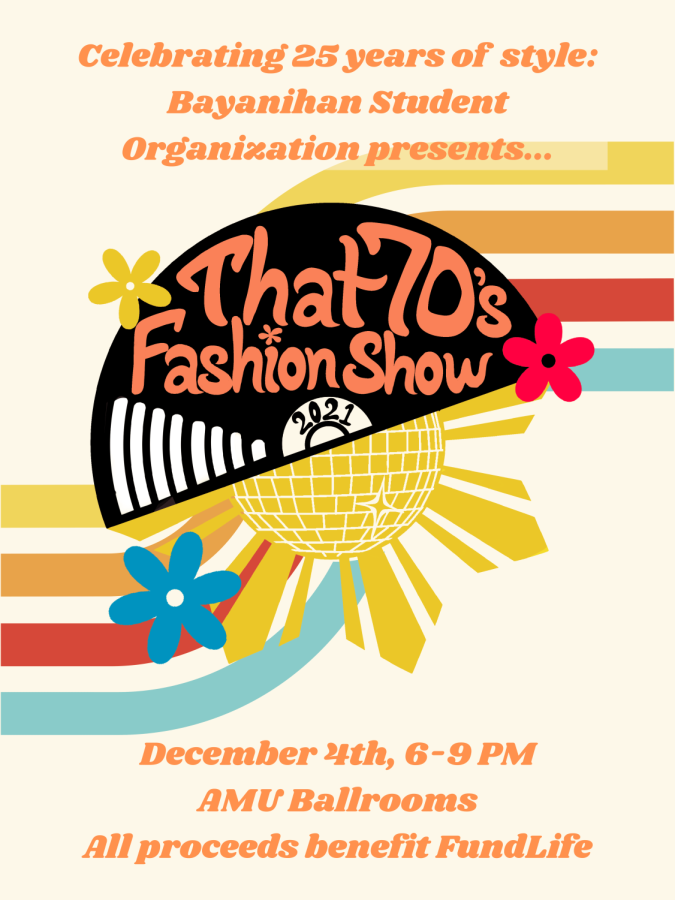 Fashion is a great medium to express yourself without communicating a word. Humanity has designed ways to share these feelings with the world through the invention of fashion shows.

This year marks the 25th anniversary of the Bayanihan Student Organization’s Fashion Show. Since it is such a big event, the students wanted a theme to fulfill that; the theme for this year is That 70s Fashion Show.

Michelle Cruz, a sophomore in the College of Health Sciences explained how the theme ties into what music is played and features in a segment where the models will wear theme-inspired clothing.

BSO is an organization on campus that aims to bring together students and educate them about Filipinx culture. The Fashion Show is designed to fundraise for a charity of BSO’s choosing, and, according to Cruz, over the years it has become Marquette’s largest student-led fundraiser.

The show coordinators, Cruz, and two other students, Gillianne Savella and Sean De Asis, both sophomores in the College of Engineering, started organizing the show in May . While she is only a sophomore, Cruz has experience from last year’s fashion show.

“I was in the Opening, Cultural and Modern [segments] and that was pretty much my first exposure to BSO and Fashion Show,” Cruz explained. “I think that was what got me interested in becoming a Fashion Show coordinator; I wanted to be a bigger part of the process.”

The organization collaborates with shops, such as Abakada, Milwaukee Home and All Goods, who lend clothing for the models. Additionally, to raise more money, BSO coordinated with restaurants around campus, including Serenitea and Tangled.

The BSO Fashion Show is organized into several different categories; three for dance and four for modeling. Each dance segment features different styles including formal, cultural and modern while each modeling portion has distinct genres of clothing such as casual and sportswear. Gabriel Del Rosario, a first-year in the College of Engineering, is involved with two segments, and he says that participating in the event has been a great experience.

“I get so excited every week to go to practice,” Del Rosario said. “It’s been very crazy because it’s a lot of practice time, but it’s all been super fun for me. I know a lot of people are stressed, but when it comes down to it, when it’s show day, everyone is going to have a good time.”

The proceeds from the event will go to help a charity of BSO’s choosing. This year’s charity is FundLife International, which is a Philippines-based organization that works to assist young women and children.

“[FundLife’s] main focuses are … to help educate them and get them ready for the workforce, make sure they have the skills to be employed and succeed,” Cruz said. “During the pandemic, they altered their resources to help offer students without proper study environments at home; they gave them resources to learn.”

BSO hopes to match the funds raised in 2019, but they would love to surpass that amount. Cruz explained that the 2019 Fashion Show brought in around $3000-4000.

Throughout the past few months, BSO’s members have put in weeks of practice and planning to present a riveting show for their audience.

While the pandemic didn’t affect much this year, there was significant impact left behind from 2020. Cruz shared that since all the social coordinators are sophomores, they have one Fashion Show under their belts, but it was virtual. However, they aren’t letting that hold them back.

“None of us have actually seen an in-person Fashion Show, so it’s exciting that we get to see our first Fashion Show but also put it together,” Cruz said.

The BSO Fashion Show will be taking place in the AMU ballroom Dec. 4. Remember to buy your tickets this week to support BSO and their dedication.

This story was written by Izzy Fonfara Drewel. She can be contacted at isabella.fonfaradrewel@marquette.edu.