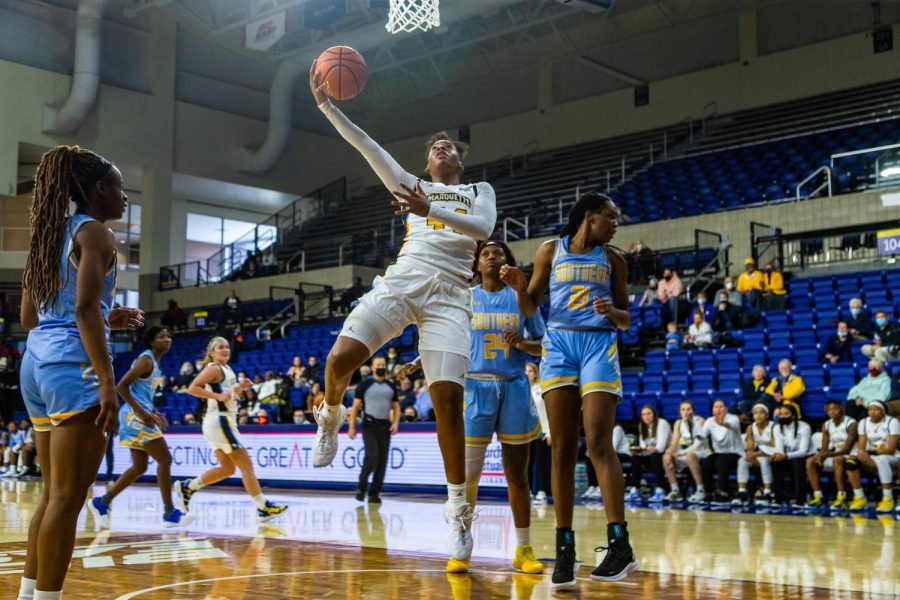 After pulling off a come from behind victory against Middle Tennessee Friday afternoon, Marquette women’s basketball suffered a setback Saturday afternoon at the Daytona Beach Invitational falling to Georgia 70-45.

It is the second loss of the season for the Golden Eagles.

As has been the trend for the last three games, the first quarter was sloppy for Marquette. Georgia dominated on both sides of the ball and held the Golden Eagles to shoot 22.2% from the field in the frame.

After taking a 15-9 lead into the second quarter, the Lady Bulldogs used a balanced scoring effort and a strong 8-for-13 shooting performance in the frame to build their lead to 30-17 heading into halftime.

It was Georgia’s defense that brought struggles to Marquette in the first half. The Golden Eagles shot a poor 23.3% from the field and went 0-for-8 from beyond the arc in the first 20 minutes.

Georgia redshirt senior Mikayla Coombs ended the first half with a 100% field goal percentage, going 6-for-6 for 12 points. Meanwhile Marquette sophomore forward Liza Karlen and graduate student Karissa McLaughlin were held scoreless from the field. McLaughlin finished the half with one point, going 1-for-2 from the free-throw line.

The start to the third quarter was not much better for Marquette as they continued to struggle finding their rhythm.

Marquette continued to fight their way and cut the deficit The Golden Eagles used a 9-2 run over a span of roughly three minutes to bring the Lady Bulldogs deficit within seven at the 6:32 mark of the quarter.

Then graduate student Jenna Staiti hit a 3-pointer to spark a 14-2 run for Georgia and the Lady Bulldogs took control the rest of the way in the third, leading as much as 27 points at one point.

Georgia hit back-to-back jump shots to open up the four quarter, forcing Duffy to call a timeout as her team was down 57-33 at the 9:16 mark of the quarter.

The Lady Bulldogs outscored the Golden Eagles 17-12 in the fourth, cruising their way to a 70-45 victory.

Graduate student Lauren Van Kleunen led the way for Marquette with 13 points shooting 6-for-15 from the field and 1-for-1 from beyond the arc. Van Kleunen also recorded four rebounds and one assist on the afternoon.

Combs and Staiti led the way for Georgia with 13 points a piece.

The Golden Eagles won the rebound column 43-37 on the afternoon. Marquette has now outrebounded each of its six opponents to begin the season.

Marquette (4-2) will return to the Al McGuire Center for its BIG EAST regular season opener against Xavier Dec. 3 at 7 p.m. CST.