Marquette comes from behind to defeat Middle Tennessee in overtime 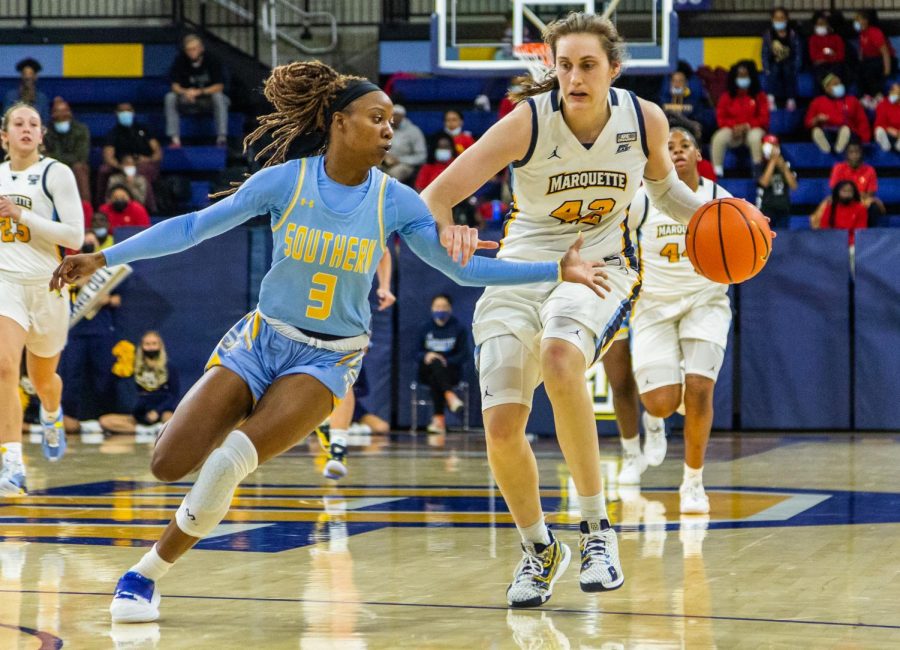 Marquette women’s basketball overcame a double-digit deficit in the second half, defeating Middle Tennessee 59-55 in overtime Friday afternoon in the Daytona Beach Invitational.

The Golden Eagles used a 40-25 scoring advantage in the second half to beat the Lady Raiders by four in overtime.

“This is a big win for us,” Marquette women’s basketball head coach Megan Duffy said to FloSports’ Katerina Elise Biancardi after the game. “Middle Tennessee is always tremendous program. They play a really hard style of basketball to score against and they got some young kids that are fearless. This is a character game coming off the tough Colorado loss.”

In the first quarter, Marquette opened up with a 6-0 run with baskets from graduate student forward Lauren Van Kleunen and junior guard Jordan King. However, Middle Tennessee quickly responded as they closed the gap and tied the game at six a piece at the three minute mark of the frame.

The Golden Eagles took a 12-10 lead into the second quarter after King made the layup off a pass in transition from junior guard Antwainette Walker.

The start to the second quarter would be much different, as Middle Tennessee’s defense held Marquette scoreless for the first three minutes. Despite Van Kleunen hitting both free-throws, which brought the deficit to four points, senior Dor Sar hit a 3-pointer at the end of the first half to send the Lady Raiders into halftime with a 23-17 lead.

It is the second straight game, Marquette trailed at halftime.

Coming out of halftime, Marquette’s turnover struggles continues as they turned over the ball twice in the first 30 second of the third quarter. Graduate student Karissa McLaughlin found her way in the frame, going on a 5-0 run of her own to cut the deficit to eight.

At the 3:30 mark of the third, Middle Tennessee jumped out to its biggest lead of the game at 30-19.

Marquette then used a 14-2 run to pull themselves back in the game and head into the final quarter of regulation trailing only by five.

Despite entering the fourth quarter trailing 32-27, Marquette continued their momentum and capitalized defensively. The Golden Eagles got their first led since the first quarter at the 8:36 mark of the frame when King hit a mid-range jumper.

With 18 seconds left in regulation and down two, King hit an elbow jumper this time tying the game at 46-46. Then the Golden Eagles created a defensive stop sending the game into overtime.

Both teams traded runs to start overtime. Sar hit back-to-back 3-pointers to give Middle Tennessee a 52-50 lead at the 2:07 mark forcing Duffy to call a timeout.

Coming out of the timeout, Marquette outscored Middle Tennessee 9-3 to pull out the 59-55 victory.

For the second straight game, King led the way scoring for Marquette with a season-high 16 points while adding seven rebounds, four assists, a block and a steal.

Van Kleunen earned her second career double-double with 14 points and a career-high 13 points.

“One of the keys to the game, we knew we had to get on the boards as they were a tough team defensively and understanding that. Our whole post group we pride ourselves on rebounding and we got it done today,” Van Kleunen said after the match to Elise Biancardi.

Marquette (4-1) will face Georgia tomorrow at 1:15 pm CST in Day 2 of the Daytona Beach Invitational.

This article was written by Kelly Reilly. She can be reached at kelly.reilly@marquette.edu, or found on twitter @kellyreillyyy