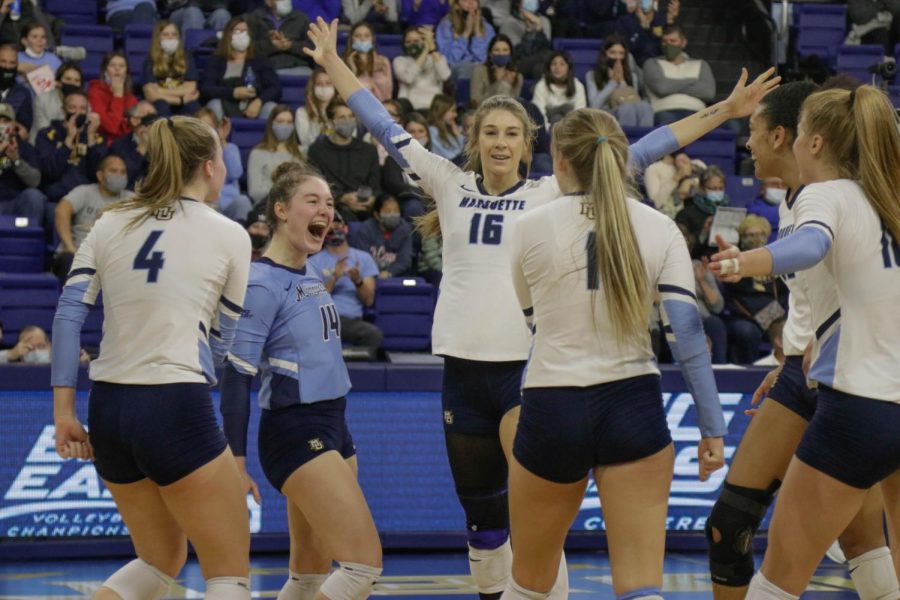 Marquette women's volleyball celebrates after a point in its 3-0 win over UConn in the BIG EAST Tournament semifinals Nov. 26.

Marquette volleyball defeated UConn in straight sets (25-14, 25-18, 25-13) in the first match of the 2021 BIG EAST Championships Friday afternoon at the Al McGuire Center.

“(A) good team effort, I thought to win with those scores multiple people have to play well and I think they did that,” Marquette head coach Ryan Theis said.

Set one started out close between both teams, before Marquette used a 5-0 run to take a 13-8 lead forcing UConn to call a timeout. Coming out of the timeout, the Golden Eagles increased their lead to six, 19-13.

“I thought that defeated them a bit,” Theis said.

Marquette finished the set on a 9-1 run, which included a solo block from redshirt first year Anastasija Svetnik.

Graduate student Taylor Wolf led Marquette with four kills, six assists and three digs in the first set. As a team Marquette hit .231 and UConn hit .054 on the set overall.

In the second set, both teams traded off 3-0 runs to start off the frame keeping the score close. After taking a 14-12 lead, Marquette went on 5-0 run to increase their lead to seven 19-12.

Both teams traded off runs in the middle of that frame until Marquette went on a 3-0 run and eventually secured the second set 25-18.

First year Jenna Reitsma had four kills in the second set to bring her total to six as Marquette hit .214 on the set.

In the third set, Marquette started with a 12-2 lead and never relinquished the lead, ending UConn’s postseason hopes. The Golden Eagles brought in redshirt sophomore Megan Lund to serve at the end of the frame.

“Those are the fun ones when you jump out to a big lead and you don’t have stresses,” Theis said.

Reitsma and Wolf led the way on the afternoon for Marquette with eight kills and 11 digsa piece. Wolf also added 15 assists to her stats line. Another key contributor for Marquette was Svetnik who finishing with five kills and four total blocks.

“I thought she was great today,” Theis said. “She’s been doing so much better throughout the course of the year.”

Despite finishing the set with three aces and 11 digs, redshirt junior Katie Schoessow said she still wasn’t satisfied with how she played.

“I’m pretty hard on myself so I was pretty frustrated, I free-balled a ball into the net which that kind of set me down,” Schoessow said. “I’ve been working on my serve a lot in practice and so I think it’s paying off a lot.”

The Golden Eagles finished the match hitting .248 while the Huskies hit .034 on the afternoon overall.

Marquette (26-4,16-2 BIG EAST) will play in the BIG EAST Championship Saturday at 1 p.m. CST against the winner of Creighton vs DePaul on FS2.

In order to win their first BIG EAST Tournament Title since 2013, Theis said the team will have to play with fewer errors.

“Playing low error which is what we did today,” Theis said. “We’re going to have to play good defense cause either team tomorrow (Saturday) has some arms that can kill it.”