Walker stepping into bigger role as a defender for Golden Eagles 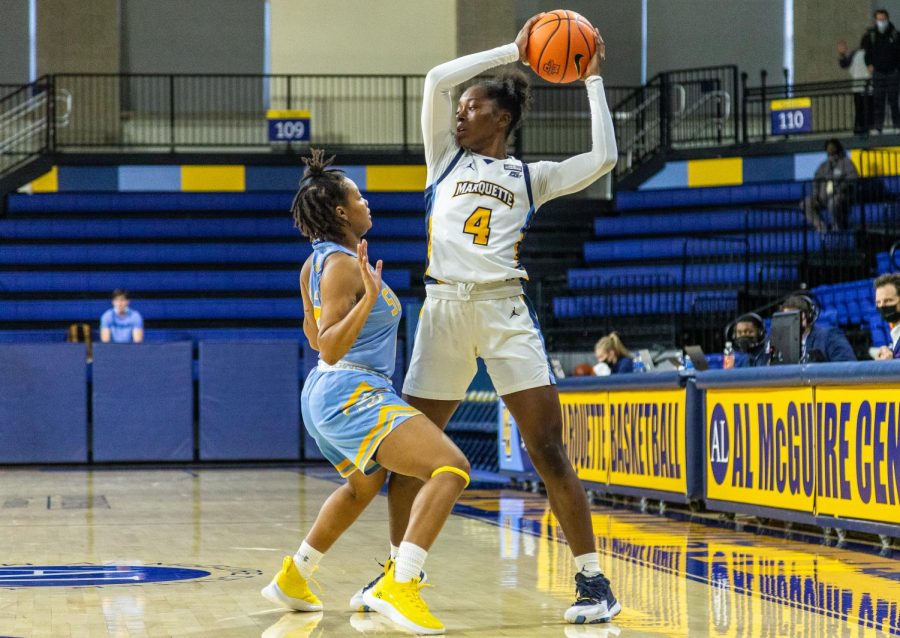 Antwainette Walker (4) attempts to make a pass in Marquette's 60-45 win over Southern Nov. 15 at the Al McGuire Center.

Marquette women’s basketball junior guard Antwainette Walker, or as her teammates and coaches call her, “Mari,” prepares to take on a much bigger role this season as a defensive machine for the Golden Eagles.

“On the court, Mari brings a different type of competitiveness. When she’s got that right mindset that she can get a defensive stop, she is going to get that defensive stop,” junior guard Jordan King said. “When she has that competitive determined mindset, she is in a really good spot.”

Walker said she has been playing basketball since fourth grade, but she participated in other extracurriculars before realizing that basketball was her sport.

“I don’t think I always wanted to play college basketball, when I was younger, I did different things, I did dance, ran track, played volleyball so I was kind of like dip and dabbling in other things too, I started to realize that I was better at basketball than the other sports around middle school,” Walker said

Walker transferred to Marquette prior to the 2019-20 season from Arkansas-Little Rock, where she played in 21 games during her true first-year season.

The Lowell, Illinois native said she chose to transfer to Marquette and join head coach Megan Duffy’s program because of the culture that she has built in her third year.

“I wanted my family and everyone to see my game and the competitive culture that Marquette has, we don’t feel sorry for ourselves we get after what we have to do as a team and coaching staff,” Walker said.

Walker said Marquette’s academic rigor was another reason, as she wants to enter the nursing field.

“Marquette is a really good academic school,” Walker said. “(And) I want to become a pediatric nurse (so) Marquette just had the whole package for me.”

Walker said during her time off the court that season, one of the biggest things she learned was something Duffy tells her players: Trust the process. Walker was not able to play or even dress for the games, but she still had to show up and show support for her teammates through it all, and that mindset is different.

“Having to show up to practice, the weight room, being there and supporting my teammates it kind of put me in a different mindset and different role to have a different kind of leadership,” Walker said.

Looking back at her redshirt season, Walker said she was able to watch and learn from her teammates, but two in particular served as major teachers: guard Selena Lott and graduate student forward Lauren Van Kleunen.

Walker said it was Lott’s ability to play defense and score that she looked up to.

“Selena just always had this mentality she was a very good defender,” Walker said. “So, stepping into her role (now) and being a good defender for us is really important this year.”

Walker said as for Van Kleunen, who’s is referred to as “Louie” on the team, it was the consistency she brings on a nightly basis.

“As far as Louie, she knows a lot, she is very poised and knows what to do in certain situations,” Walker said. “So just looking up to her and being able to just learn from her is something I strive for.”

Last season for the Golden Eagles, Walker averaged 2.5 points, 1.3 rebounds and 0.4 assists in 18 games off the bench. Her season high came in Marquette’s 89-40 win over Providence Dec. 4 where she had 8 points in 11 minutes.

Assistant coach Tasha Taylor said Walker’s defensive skills are what helps make her stand out amongst others on the team.

“One of the things we challenged Mari on this season is being a really good defensive player,” Taylor said. “We challenged her to come off the bench and guard the best player on the floor whether that’s denying them the pass or keeping them from getting the ball.”

King said Walker brings something different to the team with her athleticism on the defensive side of the ball.

“She is really athletic and very quick,” King said. “Just her ability to get out in transition and her ability to create in the open court is really great for us too. I am really looking forward to just continuing to see her develop and put some of that stuff together.”

“Mari is going to do whatever it takes to achieve her goals, whether it is in the classroom or on the court. If you challenge her she is going to find a way to fix it and get the task done” Taylor said. “She is determined to get whatever it is that we ask of her to get done.”

While the season remains young, Walker said she and her teammates are determined to continue working both on and off the court in order to continue to have a winning season.

“I would say as a team we know that it’s going to be a long season, but not letting anything deter us from our goal of wanting to be really good this year,” Walker said. “Making sure that we do the little things will really help our team grow and prosper this season.”

This article was written by Kelly Reilly. She can be reached at kelly.reilly@marquette.edu or on Twitter @kellyreillyyy