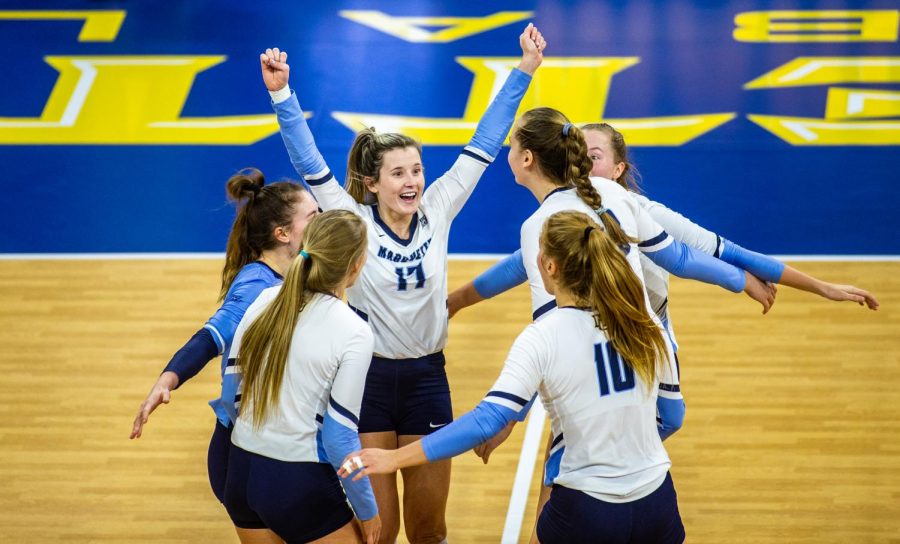 Marquette volleyball celebrates after a point in its 3-0 win over Georgetown Nov. 19.

With the regular season in the books, the Marquette volleyball team transitions into postseason play starting this weekend with the BIG EAST Volleyball Tournament.

Heading into this weekend’s conference tournament at the Al McGuire Center, head coach Ryan Theis’ squad will be the No. 2 seed after losing the tie-breaker with the Creighton Blue Jays.

On Wednesday morning, the BIG EAST Conference announced postseason awards and honors in a press release.

Graduate student Taylor Wolf was named Co-BIG EAST Player of the Year, along with St. John’s senior Rachele Rastelli. It is just the third time a Marquette player has earned this award, with Allie Barber (2017 and 2019) being the last.

Wolf, who also was named to the All-BIG EAST Conference Team, is second in all the NCAA Division I volleyball with seven triple-doubles on the year while averaging 2.89 kills, 5.42 assists and 2.7 digs per set this season.

Rennie totaled 286 kills on a .322 hitting percentage in the regular season, while adding a team-best 109 blocks.

Taking on the Huskies

During the season season, Marquette went 2-0 against UConn, beating the Huskies in four sets each time.

In their first matchup Oct. 3, Werch finished with 11 kills on the evening while Rennie added 10 of her own. Wolf finished one kill shy from recording a triple-double as she finished with nine kills, 27 assists and 14 digs.

While during their last matchup with Huskies Oct. 23, redshirt sophomore Hannah Vanden Berg and  Rennie led the way on the night for Marquette with nine kills a piece.

Theis said UConn can make things pretty stressful during a match and that those stressor can pile up.

“They’re a really skilled team with a really good setter (McKayla Wuensch) who puts you in a lot of stressful situations,” Theis said.  “They’ve got a couple of physical attackers with big arms, they’ve got speed in the middle… so they can make things pretty stressful for you and it can pile up quickly as it did when we played them here (Al McGuire Center).”

Outside of Wuensch, Theis said that one of the other players from UConn they are looking at is senior outside hitter Caylee Parker, who led the Huskies in kills with 379 kills.

“You got to keep her in check, she’s had a couple of weekends where she’s been BIG EAST Player of the Week, she can go off for four, five, six kills in a set and it’s pretty tough to keep pace with,” Theis said. “If you can keep her (Parker) at least inefficient if her numbers mount up you’re doing something right defensively.”

Marquette will be down two starters heading into the tournament: Vanden Berg and Werch.

First-year Jenna Reitsma, who was inserted into the starting lineup following Werch’s injury, said that the mentality of her and her teammates is to play for Vanden Berg and Werch.

“My mentality really has been to play for them, because I know they really want to be on that court fighting for a championship with us,” Reitsma said. “That’s definitely something in my mind and even the rest of the team, we just want to play for those people who can’t be on the court with us.”

It is the second time in a span of three years that Marquette will be hosting the BIG EAST Tournament.

Reitsma said having the tournament at home helps her and the team relax a little bit.

“I think that it’s comforting to know that we practice here everyday, we know the building, your family will be there and we’re just really used to the space,” Reitsma said. “Having the locker room where we can jam out and just feel comfort I think helps us relax in those emotions instead of having to adjust to a new environment,”

Redshirt junior Claire Mosher said that it’s nice to sleep in your own bed at night heading into the tournament.

While most students will be off-campus for the tournament due to the Thanksgiving holiday break, Theis said it’s still nicer to be at home than on the road.

“It’s a different environment for the conference tournament, the students are gone, the band is gone but the comfort of home is the comfort of home,” Theis said. “Site lines, the gym, your spacing, all that stuff it’s nice to feel comfortable.”